Sometimes it just doesn't pay to get out of bed.  Ever have one of THOSE days?  I have them quite often, but yesterday got a gold star.  How could something so small and unforgettable cause so much havoc?

I was up at my usual early hour, fed the dogs and began the process of heating the house.  On the menu for the next three days was pot roast.  This time I decided to use my big crock pot so I could smell that lovely beef cooking all day.

But first ..... it needed a nice browning on the stove.  I turned my pan on high and laid in the two huge chunks, slathered in spices.  It was doing quite nicely, so I didn't even bother to turn on the exhaust fan.  BIG mistake.

All of a sudden, with absolutely no sign of smoke or even a whisper of steam, the alarms started screeching!  ALL FOUR OF THEM!  Good grief ... that's just what I needed this morning.  I grabbed my inside ladder and climbed up with a cutting board in hand.  My plan was to swish the air around so they would stop.  No such luck.

One of them in a completely different back room was also screeching.  How could that be? 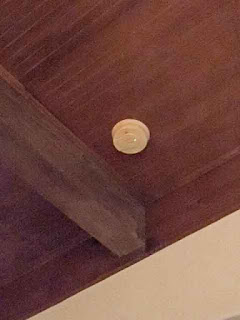 Maybe I can shut them off somehow.  I grabbed my keys, ran out into the 31 degree weather to the garage, where I wrestled with my tallest ladder, trying to get it out the door.  Finally inside with it set up and me on my tippy toes, I pushed every button on the alarm.  NOTHING.

I took out the battery.  NOTHING.  In the meantime, the dogs are frantic.  If Miss Jessie wasn't deaf before, she certainly is now, with me following right behind.  WHAT THE HECK?  Why won't they turn off?

I moved to the second location and tried that one.  Come to find out, they are all hard wired and there is no OFF button.  I was quickly running the names of all my friends through my brain, trying to think who I might call to help me.   I expected the Fire Department to show up at any moment.

FINALLY, I'm sure it was fifteen minutes later, they quit.  I was frazzled!  I hauled the ladder back out to the garage and locked it up.  The second I came back inside, I heard it.  BEEP!

You've GOT  to be kidding me.  BEEP!  Of course it took another fifteen minutes to figure out which of four alarms it was.  Back out to the garage I went for the tall ladder, slinging it around and out the door.  I love my twelve foot ceilings, but not right now.

I tried every 9 volt battery I could find.  NONE of them worked.  BEEP!  I trucked out into the cold again to the RV where I scrounged around and found ONE little battery.  Amazingly, it worked.  I hauled the ladder back to the garage one last time, locked everything up tight and collapsed on the couch.  I really wasn't sure that pot roast was worth all this trouble!! 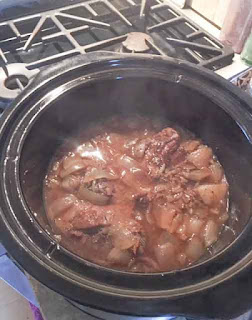 That's when I discovered all the little piles of dirt in the house.  Where did THAT come from?  It seems when I was cleaning out the gutters, a lot of dirt got stuck to the ladder, in spite of my washing it off.  It was just waiting for the right time to deposit itself all over my floors and rugs.  I spent another 20 minutes vacuuming, all the while wishing I had never bought that roast.

In the end, it turned out perfectly, but I'm not sure it was worth all that trouble.  Just to end the day on a high note, the Chance house sent me this picture.  Look familiar they asked?  April Fools ... it's cold, but it hasn't snowed, even though I got a winter weather warning on my phone. 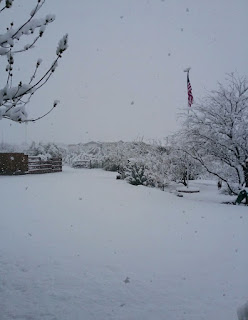 I'm keeping my fingers crossed I make it down South without hitting any of the white stuff.  That might just be enough to make me go back to bed!!!

I'm having pot roast for breakfast this morning .... just because I can!!