This company is making a killing around the world.  I joined a Facebook group of Instant PotHeads who are obsessed.  I have to admit it's a pretty fun toy to play with in the kitchen.  If you have frozen chicken and you need dinner in 45 minutes, you can do it.

You can even make some of the most tender baby back ribs I've ever eaten, although they look rather disgusting with no browning feature at all.  You must put everything into the oven on broil to get the desired dark brown crunchy crust we all know and love.

That's why I got pretty excited when I saw the review of this latest and greatest instant pot ... with an AIR FRYER.  The thing I forgot to check was the number in the bottom left hand corner.  That big 8 stands for 8 quarts, meaning it's a beast.  It measures fifteen inches across (the counter space required)  with the unit itself being about twelve.  That's about three inches wider than my six quart. 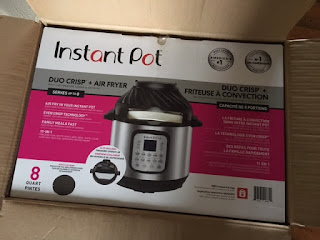 That means I can now cook for a crowd of thirty with no problem.  Do you know how many times there has been 30 people in my house?  Exactly NONE, but the lure of crispy chicken wings won out.  I first did the obligatory water test.  About three cups, turn it on to high pressure and see if it works. 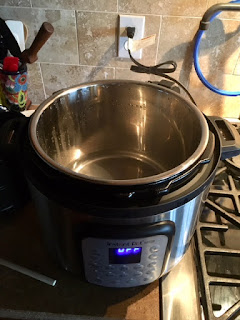 A few things have changed, like you now have to hit a start button.  I forgot and it turned off.  I'm pretty sure every single instant pot out there is different in some way.  It's a test to keep you sharp.  Anyway, I put all of these pieces together, which nested very nicely in the pot.  No water was used in this endeavor. 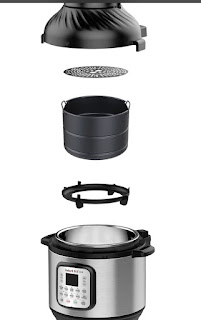 The RAW wings went on the metal strainer at the top.  I suppose I could have pressure cooked them first, but since he didn't do that on the review, I didn't think I needed to.  I carefully placed the lid on top, hit BROIL (it automatically turns to 400 degrees) and set it for twelve minutes.

By now I was salivating ..... ooooh these are going to be good!!  At the halfway point, I lifted off the lid and placed it on the handy dandy lid holder so it wouldn't burn my counter.  They were not even close to done.  I flipped them over, put the top on and added more time.

Tapping my toe, I waited for the ding.  STILL not done.  I turned them over again and added another ten minutes.  DING!  By now I'm getting irritated.  In the review, it only took ten minutes. 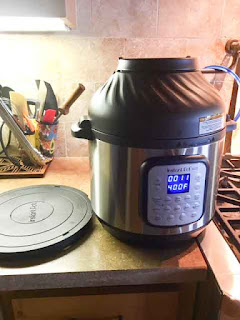 At long last, an actual 26 minutes later ...... CHICKEN DINNER!  Do they not look fabulous?  Oh my goodness they were delicious!  I might point out however that I probably could have done the same thing in my Breville Oven, although that would have raised my PG&E bill $25.  I was able to cook about twelve pieces at a time. 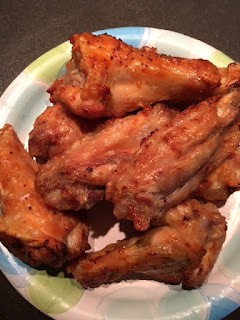 I had slathered them with garlic butter, so they were not only crispy, but tasty!!  Winner winner!!  Chicken dinner!!  Then came the cleanup.  Yes you do have to wash every single piece shown above.  Washing dishes is NOT my thing (remember, I'm the one who uses strictly paper plates), but I powered through.  Possibly you could use your dishwasher for everything except the metal screen.  Maybe some spray Pam would have helped.

Next up?  Air fried fish.

Would I recommend this to anyone?  Yes and no.  Yes if you have counter space and no oven of any kind that will crisp things up.  Yes if you have lots of people over for dinner or a big family.  For just two people in an RV?  As I said, it's huge.  I never even begin to fill up my 6 quart pot when cooking for me, although frozen leftovers are a good thing.  Maybe I'll use it at RV Rallies requiring potluck dishes.

Besides that, it was an expensive $140 ON SALE!!  That's a big chunk unless you also want to dehydrate fruits and vegetables, make jerky or need enough yogurt for two months.  So there you have it.  I'll let you know how the fish fry goes.  I'm also thinking onion rings.