What a beautiful day yesterday was.  It's been rather cold the last few days, so I bundled up before loading up all my painting gear and hauling it to the truck.  I found the top half of my snow skiing bag to be the perfect carrier.  I probably won't be skiing much anyway.

At 8:30 I turned on my big oven, in spite of it's sucking up every molecule of electricity on the entire block.  I popped the lasagne in with the tented top and waited.  Let it be known that I DID take it out of the freezer the day before to thaw before cooking.

Forty five minutes later it was still hard in the middle.  Are you kidding me?  I sent off a text message saying I would be late to the party.  It seems my oven just isn't up to temperature, or there isn't enough electricity in the neighborhood to make it happy.

I punched in 450 on my Breville oven, measured the pan (yup ... got out my tape measure to be sure it would fit) and stuffed it in.  In no time, I could smell it, meaning the oven was too hot.   OH NO ... it's going to BURN!!  And you wonder why I'm the Queen of Microwaves!!

With no time left, I wrapped it in foil, then in a huge bath towel and placed it in a cardboard box.  Surprisingly, it stayed hot until 11:30 when we ate.  They loved it, or more probably, were nice enough to say so.  The taste was fine, but the texture of those overcooked noodles isn't my favorite. 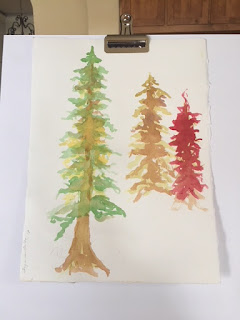 The next thing I know, the teacher Carol says "let's paint a tree".  Her mother (very well known around here for her paintings) didn't like her trees, nor did Carol like her own.  I hadn't a clue how to paint a tree.  We all grabbed brushes and followed her directions.  So here's my first tree(s).

It wasn't a matter of color, we just used what was already on our pallets.  Carol added to my red tree, saying it was too skimpy.  So there you have it, my SECOND masterpiece!  Honestly, I have no idea how to paint ANYTHING.  Where do you start?  Too bad Bob Ross isn't still around.

They critiqued my cup and said it was great.  I doubt they would say different, because they are such a nice group of people.  I did finally get up the nerve to add a little more color to it. 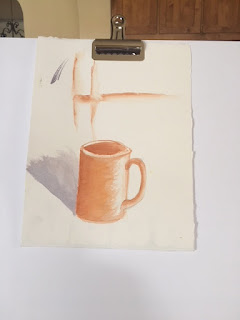 Onward and upward.  The group won't meet again until sometime in February.  In the meantime, this is my next piece to paint.  I went through all my pictures of the Oregon coast and picked this one, mostly because it looked to be the easiest! 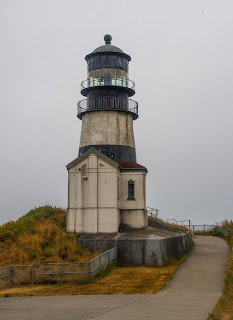 In the meantime, I packed a few more things for the RV rally while the sun was shining and added a container of DEF.  It was a gorgeous 65 degrees all day long.  I soaked in as much sun and warm as I could because tomorrow morning I'll be up even earlier and it is reported to be foggy.

The Elks Lodge Honor Guard places wreaths on every member Veteran's headstone at all the cemeteries in our County every Christmas.  Since many of the Honor Guards are also Knights of the Magic Kingdom, I'll be helping them this year.  It's going to be a long day, but an honorable one.