A Washer I Am NOT!

You all know when it comes times to washing the rig, I'm terrible at it.  Almost as bad as my cooking.  I can't reach the top unless I'm on a very tall ladder.  I try not to tempt fate.  That's why I called I & I Mobile to do the job right.

But first, a trip to PetCo to find bird seed.  Jonathan was out completely.  The puppies chicken wasn't going to hack it.  You'll be proud to know I didn't stop at ANY other store.  Surprised?  Me too!!

Once back at the park, while waiting for the wash crew, I watched the locals play shuffleboard.  There's so much finesse, I love it.  Then you hear WHACK as someone killed another's puck.  It's all quite sophisticated!  Soon it was time to head back to the rig for the wash crew.

It was a little off-putting when I opened the door to a huge puff of smoke from a cigarette.  No matter though, my baby is finally going to be clean and waxed after two years.  I know, that's WAY too long. 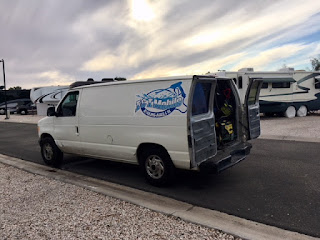 I forgot to ask about waxing the roof, and of course that would take another hour, time which they didn't have.  Oh well, at least it will be clean and I can wax the top myself when I get to Tucson.

The puppies went crazy as the guys hit the roof.  Soap went flying everywhere, causing my newest neighbors to go inside.  Really, the four guys did a very good job of keeping the water contained. 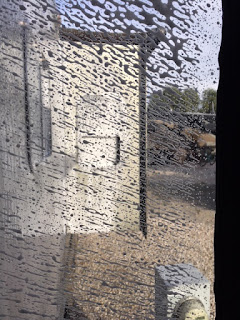 I walked around occasionally just to see how it was going.  Unlike previous companies, they even opened the closed shades and washed behind the ears.  Here she is in all her glory.  Isn't she pretty?  At least for the time being.  I'm just praying for no rain for the next 30 days. 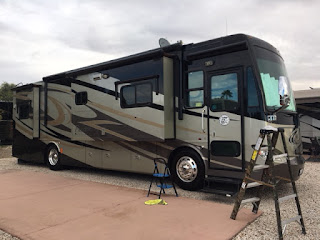 The puppies and I spent the rest of the day snuggling on the couch.  I had received word early in the morning that George Yates had passed away.  It's just so sad that someone with that much laughter to give the world should pass so young. 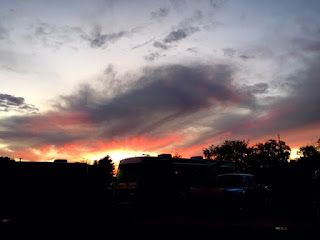 So this sunset is in his honor.  He taught me how to barbecue the best chicken ever and gave me several foolproof recipes, not to mention making everyone in his RV world smile.  You will be greatly missed George!!