Life At The Repair Shop!!

There's nothing like spending the day at a repair shop for your motorhome.  It's not quite as nice as the beach, but there were some good looking salesman around to keep me on my toes.  Even better, they definitely know how to smooze the ladies.  I enjoyed every minute!!

It was a cold morning after a night of helicopter flying.  Not me of course, but some guy was taking lessons right next to the RV park.  He landed and took off many times, hovered right over us and generally made everyone plug their ears from 3:00 to 5:00.  Was he gone?  Nope!!  He came back to practice in the dark until 9:30, way past my bedtime.

A little groggy in the morning, I packed up the RV and brought the slides in to crunching noises.  I hope that ice didn't do any damage.  There shouldn't have been much more than what was on my car. This was after spending 45 minutes on the freeway to go 18 miles to La Mesa RV.  Traffic was crazy!!

When I arrived, two guys were checking people in while I stood in the cold.  Twenty minutes later, I nabbed a nice gentleman who called my service guy Dave.  Another fifteen minutes and Dave said to go get some coffee while he did his paperwork.  I was getting worried.  This was definitely NOT the fast service I received last time.

He finally came and got me, clipboard in hand, to write down my problems.  We had a slight communication problem when he said words like wishy-washy wouldn't work.  Dripping water OUTSIDE from the shower inside, he got. 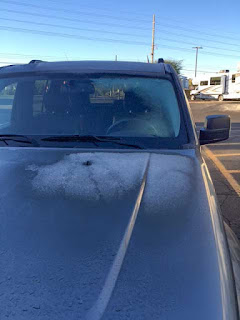 They drove Baby away and I and the dogs settled in for what I thought would be a quick couple of hours.  Have you ever been in the back seat of a Jeep Liberty?  It was crowded with the three of us so Jessie sat on my lap.  That just wasn't going to work.  I smelled bad enough without a REAL shower. "Dog" added to that wasn't palatable. 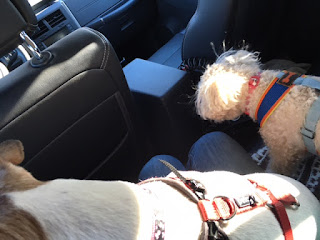 I decided to take them for a walk and run off some of the nervousness ... theirs AND mine!!  Back behind all the rigs for sale is a large walkway that turns into sort of a gravel park.  It was perfect!!  Freezing cold in spite of the sun, but perfect. 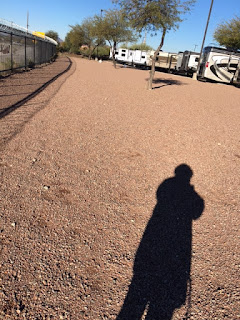 I arrived back at the car just in time for Dave to summon me to the rig.  I had told him I wanted a picture of the problem.  To my utter dismay, they had taken off the rear wheel and fender well, whereupon they cut a huge hole in the foam to access the plumbing.  Gosh ... wasn't there an easier and less damaging way?  I got "the look", so I kept my mouth shut.

Here's the problem ... that two inch black pipe on the right goes up into the floor.  The pipe wasn't cracked or broken.  The GLUE had failed.  Glue is the operative word here.  If the PIPE had broken, it would be covered under my extended warranty.  Since it was the GLUE that failed, they refused to cover it.  Are you kidding me?  NO, no I'm not!

In the meantime, another very nice young gentleman checked out the jack problem.  In talking to Tiffin, they said the jack had failed and I needed a new one.  At least THAT would be warranty covered.

Lucky for me, he explained everything hydraulic and jack to me like I was a really smart person, and not the dumb blond stuff I usually get.  The springs on one of the jacks required replacement and they had one set in stock.  Maybe we should replace BOTH back jack springs.  If I did that when the one really hadn't failed, the insurance company would refuse it and QUESTION the first, so I settled for one new set of springs.  I'm pretty sure that other set will fail before the end of my policy (hint hint). 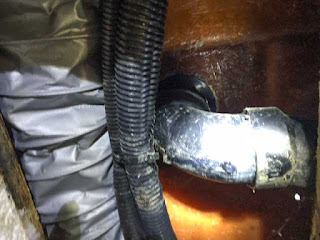 Back to the car, I probably could have gone somewhere nice for lunch, but their little kitchen serves free food.  On the menu today .... chili!!  Not bad and it was FREE.  Back to the car with the puppies. 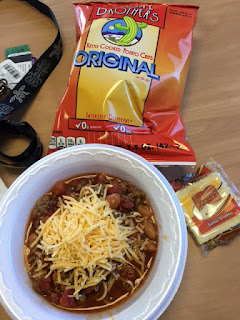 I expected Dave to show up any minute.  He didn't.  I finally took a long walk around the buildings to see my rig still up on the lift, tire off, with no one in sight.  I checked my watch.  It must be lunch time.  I'm bored to tears.  I should have brought a book.

Three hours later I finally got the good news it was ready to go.  Paying that $716.10, all but $50 being the shower repair which only required glue, was a little like shoving needles under my fingernails, especially when I just paid $710 for an air dryer.  I'm glad my accountant nature kicked in the day I purchased this thing and I have squirreled away money every month just for this occasion.  At least I'm helping to keep people employed!!  If I don't look at it that way, I'll cry!!

I'm now parked at the Last Chance Ranch in Patty and Dan's front yard.  My phone says it's 29 degrees.  Hopefully that sun I came here to bask in will arrive this week.  Chef Patty made a wonderful creation of shrimp creole and grits for dinner.  She's very good at cooking, I'm very good at setting the table.

I'm happy to announce that the adjustment on my jacks has worked (no jack replacement needed) as  I'm still level this morning.  Thank you Lord for small favors.  I'm now going to go take a nice LONG HOT SHOWER!!!  That's a good thing since I'm run out of clothespins for my friend's noses.