I LOVE TUCSON.  They have everything here that I don't have in my small town, including an Artisan Farmers Market.  We spent the day tripping the light fantastic from one end of town to the other.  Patty Chance knows all the good spots.

It was my lucky day when as soon as we pulled in to the jam-packed parking lot, I found an empty space right up front.  This Farmers Market had more than just vegetables, it had spaces from Peru, Mexico and England, among others, that drew me in like a fly to honey.

I spotted this beautiful blanket first.  Do I have enough of these already?  Yes, yes I do.  But not THIS one!!  It's a table runner that will look great in my Chinese dining room.  I know what you're thinking, but I just can't get rid of that beautiful hand carved Chinese cabinet, or the terra cotta soldiers I bought while in China. 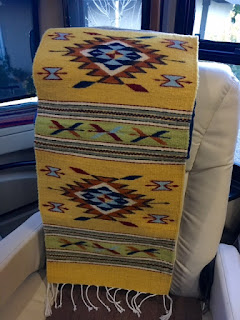 This was the only other one that interested me.  If I had my choice, I would carpet my floors with these beautiful works of art.  Buy more than one and they will deal with you ... not as easy as Algodones, you have to work a little harder at it, but the price ended up about the same. 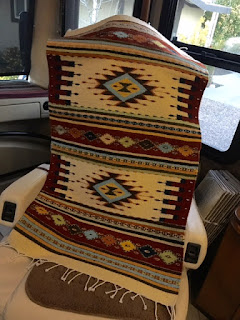 I can rarely pass up the food businesses and when I saw tamales, I couldn't stop dancing.  I scarfed down the first green chili with corn in no time.  They were so good I bought four for the freezer and one RED tamale.  I should have gotten a dozen.  I had this one for dinner and it was AMAZING with a capital A!!  I actually used to make these in the old days ... maybe I'll try them again!!  What could go wrong? 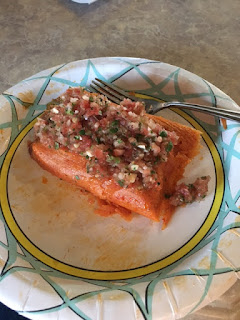 While Patty ate hers, I got in MORE trouble at the British Baking Company.  This is sticky toffee pudding and lemon pudding.  Not puddings at all, they are very moist cake and DELICIOUS!  We're tripping the RIGHT fantastic Patty ... I could come here every week for these!! 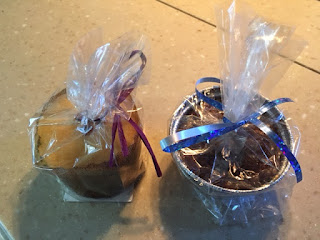 There were many artisans selling their wares, from Mata Ortiz pottery to purses to beet tortillas (surprisingly tasty).  The whole time however, Quilters Desert Patch (Cactus Quilts) kept calling my name.  Time to dance on down the road South for just ONE more look.

Unfortunately it was Saturday and it was crowded.  This tiny mobile home was packed with fabric crazed women grabbing and hoarding every bolt they could.  Finally thinking BACKING, which is pretty much the most expensive part of a quilt, I picked up a few bolts myself, with an eye towards the thinner ones in the hopes of taking it all for 70% off.

The three gals cutting fabric were working like furious, except for the one helping the people in MY line who liked to chit chat.  I was very patient, but feeling badly for Patty who waited in the car.  Finally after an eternity, my fabric was cut and I was dancing out the door with another 25 yards for $100.  Compared to the $12.99 a yard price I pay at home, the average $4.00 had me dancing in my rig as I carefully refolded each piece. 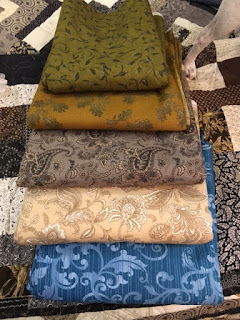 Did I show you the new gadget we bought in the Big Tent at Quartzsite??  I mentioned to Patty that I would like this chopper since it is smaller than my old one that vanished into thin air.  We each bought one, this being not just a chopper like my old one, but a juicer with attachments to slice, dice and grate.  Time to try it out. 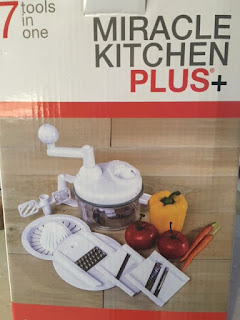 I read the recipe while Patty cut the salsa ingredients into chunks.  She went to town spinning the handle until it was taste time.  With a few spice adjustments, we had some pretty tasty eats.  This was the perfect accompaniment to my red tamale.  SCORE!!  Chalk one up for Patty and Nancy!! 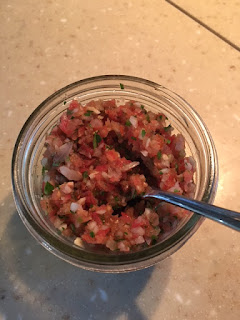 It's a breezy 44 degrees this morning (feels like 25), so things are warming up a tad.  We're going to a show today by the Sonoran Dogs.  I've not a clue, but I'll tell you all about it tomorrow.  In the meantime, I'm looking up the next Artisan Market so I can get more tamales.