We left around 9:00 am for our freeway jaunt to the big city.  I have to say Arizona has pretty good roads compared to my part of the country, although California is finally trying to step up.  It's not me or the dogs I worry about, it's poor Jonathan.  If I go down a bumpy stretch, his brains get scrambled pretty quickly. 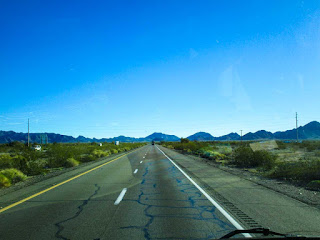 Now I don't want to say anything bad, because I LOVE the desert, but driving through it for four hours is another story.  Traffic was light however and we zipped right along just under 65 mph.  I tried to get Jon to talk to me, but he was unusually quiet. 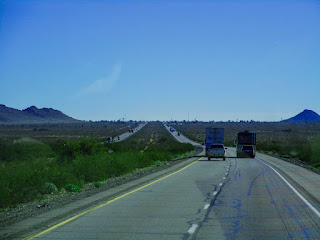 Even though I kitty kittied, I couldn't even get the dogs to join in the singalong. 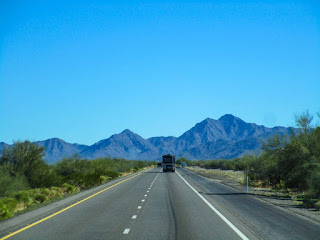 I knew we were getting closer when the saguaro joined the party as we headed to higher elevations.  It's funny how the sky changed color along the way, partly due to the direction of the sun I suppose.  I just kept driving   ........     and driving     ....... 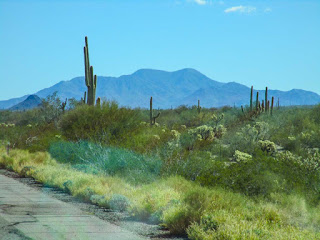 The best part would be the destination of course.  We pulled into Loves to fuel up, only to find a Jeep in my lane.  Can you not read?  It says RV FUELING.  You're a JEEP.  It's not even spelled similarly.

After taking on 37 gallons, I tried to get out of the parking lot.  Here's the problem, it's a left turn.  There's a ridiculously long red light, followed by another left turn at the stop sign, followed by 20 trucks who have already MADE their left turn, blocking you completely. 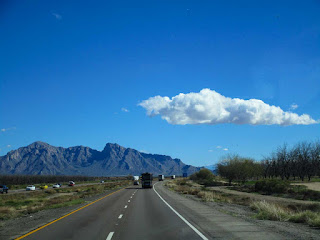 In front of me was a Montana fifth-wheel and a car.  As you can imagine, I sat there for quite a long time before a small gas truck was kind enough to let me out.  All in a day's work.  I took off for the fairgrounds where I planned to spend one night without unhooking my car.

If you are in this area, you might as well find another place to stay.  The grounds are a mess of detours, with 2/3 of the parking spaces torn up while they install sewer lines.  As you enter, the entire right side will be new RV parking (NICE!) and the left hand side that used to have pavement will now have gravel AND new sewer lines.  It won't be finished before they close for the fair however.

To make matters worse, those that ARE parked here, have to move out to dry camping on the 30th for a week as the GEM and JAM begins their event, taking up ALL the RV spots.  Won't THAT be fun!!  Luckily, I have a space available at the Last Chance Ranch for the next two weeks.  I'll probably have to bribe them with my wonderful cooking, but a parking space none the less.

I knew it was going to be cold this morning and my tiny heater wasn't going to hack it.  I'm pretty sure I got my money's worth, as it never shut off all night.  The gas heater came on several times to keep Jonathan warm.  It's was a chilly 29 when I stepped out this morning in my boots, jacket, hat and gloves.  This is even a little cold for ME!!

Now to pack up everything, transfer important stuff to the car and get out my heavy winter coat for the drive to La Mesa RV.  I'm praying they get my rig fixed quickly, but I'm not holding my breath.  I think that bad jack is going to cause me heartache.  The puppies and I will be in the car.  Just another fun day on the road!!   Brrrrrrrrrrr