All Things Embroidery and Rocks

Thankful for the slight warming trend with the nights in the low 40's and the days up to 65, I had some more repairs to work out.  Just as I was coming through Tucson, I was hit by a large rock from a car that went by.  Apparently it's an occurrence that happens often with all the gravel roads on the outskirts of town.

I'm pretty sure the last rock damage that was supposed to be repaired in Quartzsite, just became $40 in the guy's pocket.  It doesn't look or feel like he injected anything into the glass other than hot air.  Hoping to kill two birds with one stone, I called my insurance company for an appointment with Safelite.  The gal that set up the appointment sounded too bored and bothered to do her job.  In looking back, she didn't give me her name OR return phone number.  Now I have to change the appointment because it will interfere with the class below, and I can't get ahold of anyone.

In the meantime ..... the men can skip on down to the bottom if not interested in embroidery ..... Patty and I trotted off to her friend Pat's house for a day of sewing, or maybe cutting, whatever was your preference.  Here's the thing.  Pat has a NEW stand-up embroidery machine.  I've been fascinated for quite awhile and Pat offered to give me some lessons.

You may or may NOT have heard of Beads of Courage bags.  Pat makes them for young cancer patients, donating everything to the hospital.  They in turn, give them to kids receiving treatment to hold their beads, depending on the type of treatment, that give them courage to continue the fight.

Not that I actually DID the embroidery, but I did pick the pattern and watched her carefully as she threaded the machine.  I got to push some of the buttons to start it up ... I was hooked.  It just so happened there was an amazing store in Tucson that sells the machines. 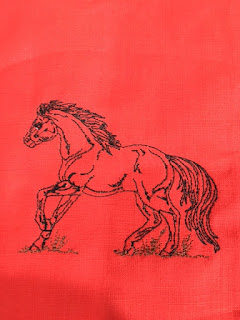 In no time, Pat had us off and running with a roundabout route of zero traffic but great houses for sale.  Yes, I'm still looking.  There's just so much going on in this town ... I love it!!  Upon arrival, I immediately sat down at a couple of machines while the gal went through the attributes of each one.  When I decided that wasn't what I wanted, we moved on up to the next one.  I say moved on up, because the prices seemed to double with each new machine.

I finally settled on a previously loved Brother machine.  Used isn't in their vocabulary.  I thought Brother just made typewriters (now that's showing my age), but this machine did everything.  We checked the stitch count, 14,000.  I came THAT close to buying it until I discovered the attached repair sheet that read 14.5 MILLION stitches upon maintenance inspection, which resets it to zero.

Darn .... I went back to the other machine.  In the meantime, Pat tried to talk the owner Don into giving me lots of free thread if I purchased one.  He said he would do one better.  He was having an Embroidery Party at a big hotel in posh Oro Valley that I could attend, where I'd sit at that machine and learn everything I could over two days.  If I liked it, I could purchase it at the same price, maybe even with a discount, and receive $800 worth of merchandise for the machine, including a $500 gift card for all the tread I wanted.  Besides that, I'd get lunch both days, along with lots of gifts and giveaways.  Hard to turn that one down.

To make it even better, Pat agreed to go with me.  Since there is three to a table, we hooked up with another gal who can't be there until noon, so we'll have the machine all to ourselves.  SCORE!!  Of course in the end, it will be the store who scores if I purchase a machine.  I'm not even going to tell you the price, because you will definitely know I'm CRAZY!! 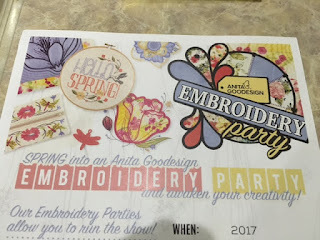 Back home, I crashed on the couch after some Sam's Choice ice cream.  I don't know if you've tried this or not ... it's from Walmart and costs a measly $2.50 per container, unlike B & J's $5.00 each.  That probably wasn't a good idea.  I was up all night thinking about how much that machine cost. 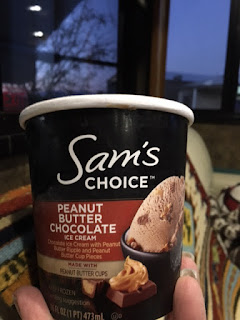 What the heck, I might as well spend it while I can.  When I can't drive anymore, I can sit on the porch with my embroidery machine and make pretty pictures!!  I'm even going to see if Beads of Courage has a program near me.

Did I mention it's not just an embroidery machine, it's a regular sewing machine also ... for all those quilts I haven't made yet.