What The Rain Brings

Another huge storm blew through last night just after I hit the sack.  There's nothing like lightning blinding you through every window in the house.  I've been here five years and have never experienced anything like it.

Here's the clouds coming through the day before when the wind was hurricane-like.  No one ever said it rains in the desert like this craziness.  Buckets and buckets of water fell to the ground. 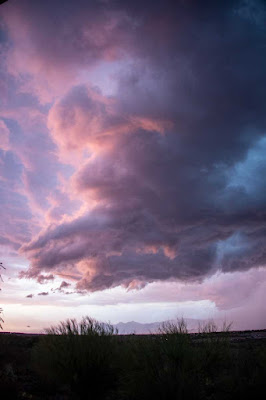 There was so much lightning, I decided not to pretend I was a lightning rod holding up my metal camera body, so this picture was taken through the windows. 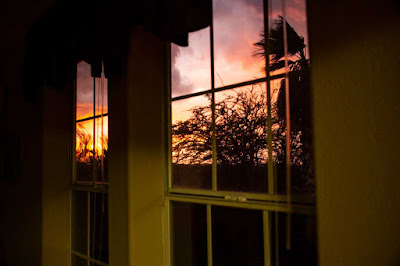 Yesterday I decided to calm my nerves a bit, having found the wine that Deb Duchaine gave me last time I was here.  It's a sweet peach moscato that divinely settled me down with only one glass.  I'll probably drink the entire bottle today after another storm hit last night.  Thank you Deb!  It's delicious! 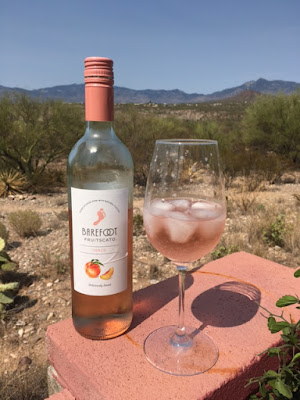 Before we go there ... again ... I did actually accomplish a few things.  Early morning hours are the only time to get things done.  Five minutes outside requires 30 minutes INSIDE cooling off.  I trimmed up the poor palm tree after the night's thrashing. 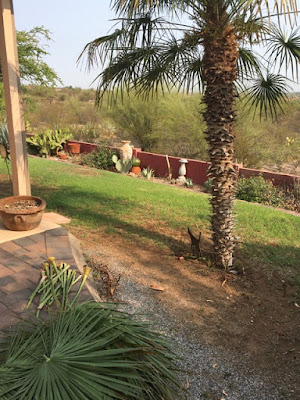 I have to say, weirdly enough, it has been cooler here than in California where temps have risen to 111-115 this last week.  The difference being they have no flash floods.  There's nothing like being woken up at midnight by your phone screaming out warnings ... like the REAL kind you hear on the radio.
Still, it's hot enough for Cooper to get a trim.  He was very patient considering I have two sets of clippers, neither of which worked well at all.  Add to that the surprise of finding out two of my outlets do not work.  I've reset every breaker in the house.  One says it's controlled by a GFI.  Okay ... I reset the only one I could find.  It works just fine, but the other two refuse to provide power. 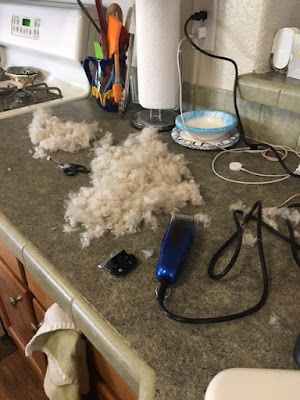 Cooper is a little worse for wear, but cooler to be sure. 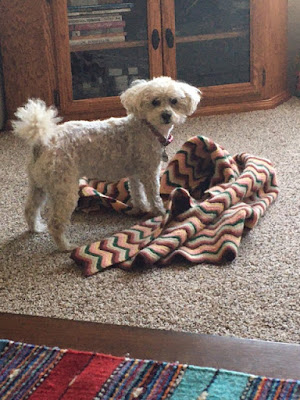 One thing the rain brings out is the critters.  This beauty was scanning my back yard for baby quail, or anything else he could find for lunch. 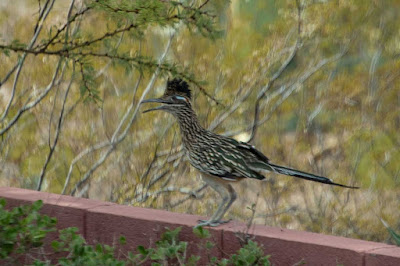 Too bad he doesn't come out at night, when he could find juicy morsels like this!!  I forgot to turn my patio light on.  Lights work to keep the critters at bay.  Just as I was taking a step, barefoot of course, I spotted a movement.
YIKES!!!  Yes I know these are good guys, eating bugs and such, but they still creep me out.  Around here they live in holes dug in the ground, which are now pretty much flooded. 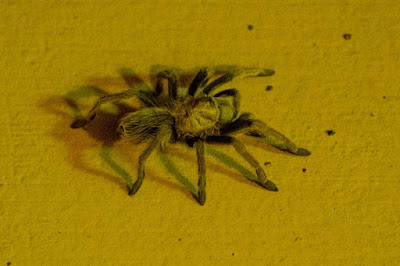 There was little sleep to be found after yet another storm hit last night, waking me up about 10:00.  Again, flashes from lightning coming through the windows lit up the house like daylight.  No big thunderous crashes, just constant flashes from the sky.

And then the rains came!!  Just WOW!!!  For over an hour it poured down, with visions of my RV cover washing down the hill in my head.  There was definitely NO sleeping.  Worry took hold, so Cooper and I moved to the living room where I read for the next few hours.

The power went off three times before it finally let up about 1:00 am when I went back to sleep for all of three hours.  Yup ... it's going to be a great, if yawny day.

This morning I'll go survey the damage, although it's only going to get worse.  There are similar storms predicted for the next five days in a row.  I think a trip to the quilt store is required to calm my nerves!!

Posted by Nancy Kissack at 6:10 AM