It was an exciting and rather off the wall day.  No bull ... or maybe just a little.  Cooper, having seen all the selfies Mr. Gibbs has been taking with his new family Patsy and Bill, begged to do the same.  I must say the results were not quite as good. 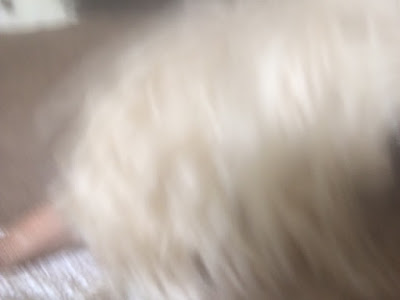 He had a hard time pushing the button on my phone.  Yeah, this is probably just a little bull. 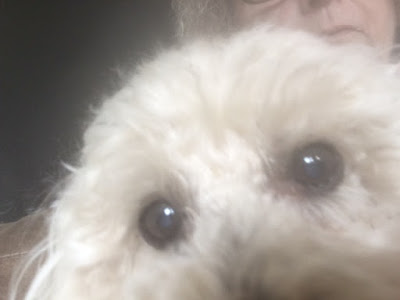 So after finding yet ANOTHER tarantula on my patio (OMG do you know how fast they can run??), where I have never previously seen one in over four years, Cooper and I grabbed snacks, water and headed off to the Empire Ranch.  Since it's a little higher in elevation, the temps were a nice 82 degrees. 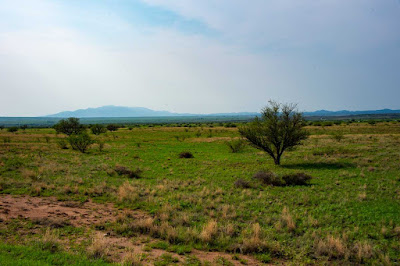 I do not know what these flowers are called, but they are beautiful.  At least three inches across, they are spread out everywhere across the land. 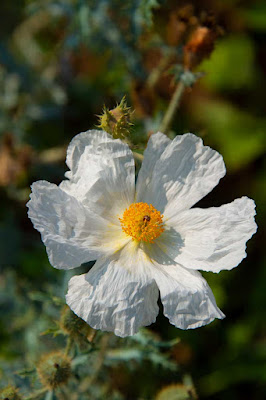 I kept an eye out for pronghorn antelope, but never saw a single one.  That breaks my record for seeing one every time I was there. 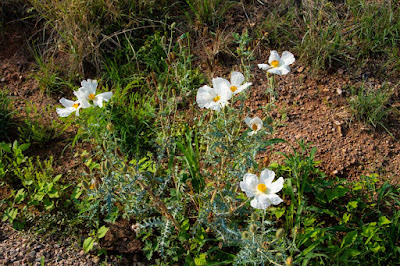 Not in such abundance were the thistles.  We spent days and days burning these on the ranch.  Those thorns can cause havoc with the cattle. 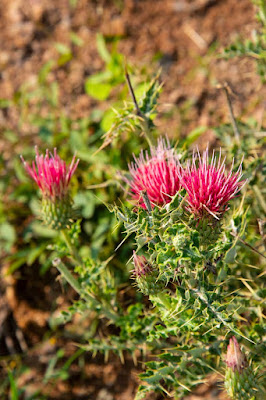 Near the cottonwood growth by the creek, I ran in to two ladies looking for a spot to unload and ride their bicycles.  I prefer riding in colder temperatures, so those two were troopers to be out on a hot day. 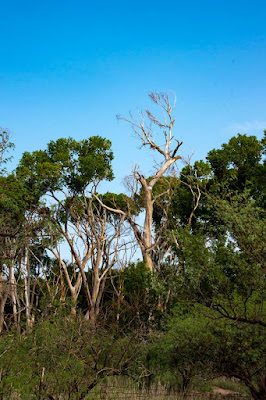 Here's the info on the road for Doug.  The first 50 yards is washboardy, but after that it has improved a lot.  Even the cattle guards aren't bad.  This side of the creek was smooth as could be.  The other side still had the same big holes at the end of the concrete. 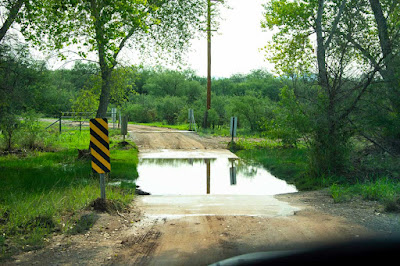 From there on to the camping spots, nothing has been repaired.  I imagine they will fix it at some point, but the roads around the top are washed out pretty badly.  To get out, I ended up driving between two big trees that scratched my truck up nicely.
That's when I met THIS guy.  For those not in the cattle business,  you usually have 3-4 bulls for breeding.  They are moved to a pasture by themselves for most of the year.  That was always the worst job on the ranch.  They are cantankerous, BIG so they can knock your horse over, and they don't like leaving the herd. 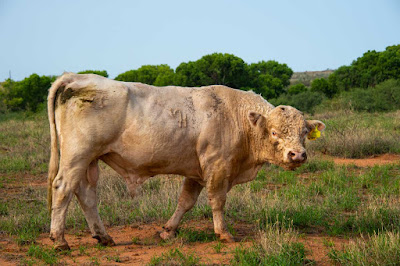 I really didn't get too close to this guy since he was mumbling something under his breath and giving me the stink eye.  Truly, these guys are almost as bad as those bison you see chasing people. 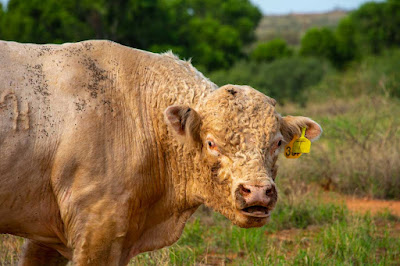 I headed on back down the road when I spotted this guy rubbing up against the trees.  If you look closely at the above image, you will see they are covered in black flies.  He was also giving off the classic get-the-heck-out-of-here mojo that I know so well.
You haven't lived until you have been knocked to the ground by a mad bull.  Thankfully my Dad was close by, told the dogs to GET him and he went after them.  Our cattle dogs saved me many times.  Champ and Blue were the best!!! 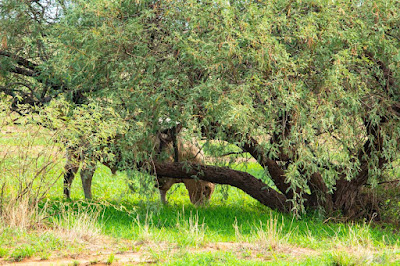 Just one tree over was the third bull.  See the head down stance?  No bull, he was pawing the ground, as was the other guy.  This is a territorial dispute about the trees and branches perfect for chasing off flies. 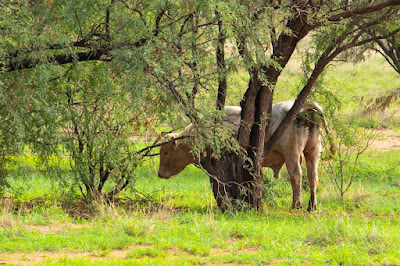 Suddenly he spotted me and switched directions.  Let me just say that if a bull, or any cattle for that matter, start walking your direction bawling, you should be getting the heck out of Dodge.  He made a beeline for my truck, suddenly burst into a trot/run while saying all kinds of bad words.  I drove off quickly as he followed me down the road.  That's definitely no bull.  So if they are out and about, you should not be. 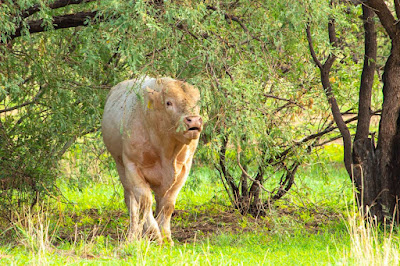 From there I went down to the ranch house to find a huge white pickup truck party.  There were maybe ten or twelve parked by the back fence.  I drove up to the group of men saying I must have missed the email about the party, since I have a white truck!!  We had a good laugh.
For those that have been there, they have been knocking down all the dead trees and leaving them lay.  This group of guys was out with chain saws cleaning up all that mess.  Not that it looks much better, but it's getting there.
When I got home, I did a few chores around the house, including inspecting my rat traps.  Boy have I got a story for you ..... but it will have to wait for tomorrow, along with a quick look at the Empire Ranch headquarters.
Posted by Nancy Kissack at 5:46 AM