It's almost time for the blasting to begin.  In spite of it being illegal to shoot off fireworks in our County, especially due to the fires that are about to rage everywhere, people in the surrounding five miles will set off one of the biggest shows in the State.  They have been practicing every night for the last month.

Personally, I don't understand why they would spend that kind of money to blow things up, but then again, I'm conservative ... okay, CHEAP!  Truly, you can sit in my driveway and see bigger fireworks shows than they have at the fairgrounds just twenty miles away.

I would rather celebrate with FOOD!!  Something with lots of sugar!!  Lucky for me, it's even cheaper than fireworks!!

It is funny to note where I get recipes from sometimes.  Thanks to the internet, you can pick up some really great ones, and of course ones that stink like a skunk.  This time I had the TV on a house remodel channel to gather ideas for making my home decorating more upscale rather than late 1960 hoarder.

They found a recipe note in a cabinet they were tearing out in an old house down south.  It's amazing that they actually read it .... Miss Dots Cake.  Just a note, not the actual recipe.  So they traced down the prior owner and discovered she had passed away and that her best friend was Miss Dot. 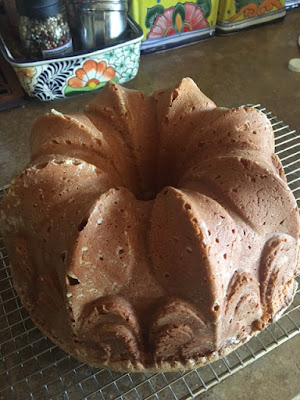 Upon further investigation, they discovered Miss Dot would make the most fabulous pound cakes for people who moved to her town.  So of course they went and FOUND Miss Dot to ask her for the recipe and to make a cake for the newest owner of the house.
That's an intriguing story ... and an even MORE intriguing recipe since everyone raved about her cakes.  I got on-line and began my own search for the ingredients.  Lo and behold .... I FOUND IT!!
A true old southern favorite.  I was a little shocked by the 3 cups of sugar, but that was right up MY alley.  I had just purchased a dozen eggs, so I didn't blink an eye at the SIX required for the recipe, along with a pound of cream cheese.  I figured this would not be just any lightweight cake.
I really needed an old fashioned bundt cake pan, but could only find the fancy dancy one.  I didn't have much hope the cake would come out with that many holes to get stuck in. 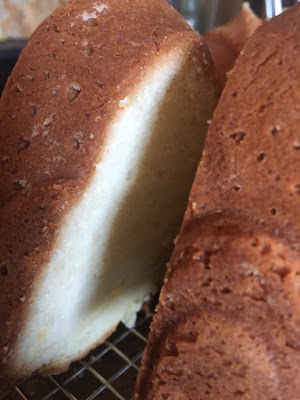 This was the thickest batter I've ever seen.  It was hard to even get it off the spoon and into the pan.  Here's something I've never heard of before.  You put it in a COLD oven.  Yessirree, while making the cake for the show, Miss Dot specifically stated you put the cake in before you turn the oven on.  Weird, right?
And SO ... 90 minutes later .... yes, that's 1-1/2 hours later, you have POUND CAKE.  Don't make the mistake I did of baking it in your small Breville oven.  The top started to get overdone, so I moved it to my BIG oven.  Unfortunately, I forgot to set the timer.  BIG MISTAKE!!
After testing it six times, not being the least bit sure if it was done or not, I took it out to cool.  Surprisingly it popped right out of the pan like a jack-in-the-box.  I could hardly contain myself. 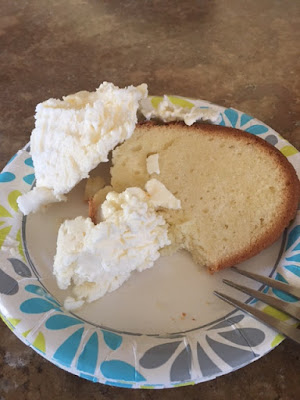 At long last it had cooled enough to cut a slice.  I took that first bite and OH MY OH MY!!  That's the best pound cake I've ever eaten.  SO much better than Sara Lee!!  Thank you Miss Dot!!!!!

I must say it would have been so much better floating in strawberries and syrup.  On the other hand, a little ice cream went a long way.  It was the most dense cake I've ever had in my life.  That thing weighed almost as much as Cooper.

Not wanting to eat it all at once, I put half in the freezer.  That night I had it for dinner.  Nothing else, just cake.  It's so dense that one small piece fills you up to the brim.  Even better if warmed in the microwave.

So thank you Miss Dot for your now famous recipe.  If I'm ever at an RV rally and require cake for 40 people, I'll make it again.