What a day .... what a day!!  It was gorgeous and cool in the morning, perfect for coffee on the patio in the dark.  The only sounds were the cooing of the dove and the chirps of the quail.  It's fun to hear since they are so vocal.   I geared myself up for the work of moving rock.  I've been known to be pretty handy with a shovel.

That didn't really last long as the heat climbed up to 95 degrees rather quickly. 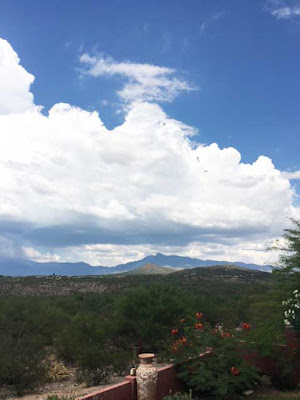 When the rock didn't arrive in the morning, I finally called.  Having worked in the sand and gravel business for many years, I know how it goes sometimes.  There's nothing worse than someone calling constantly and asking where's the truck.
I finally placed the call .... some time between 1:00 and 3:00.   Sure enough, the driver arrived a little after one.  Dan showed him where to dump.  As the bed began to go up, a few rocks fell out the bottom.
STOP!!!!  I ran to the door and hollered STOP STOP!  It was the wrong rock.  They brought 3/4" crush instead of the 1-1/2" we ordered.  He left and I called the shop.  I don't know how they got it wrong because we were IN their shop and pointed to exactly what we wanted.
Two hours later he returned.  This time I climbed up and looked over the top.  Yup ... that's it!  ROCK!!  Dan got on the backhoe and began making the washout repairs while I watched.  There really wasn't much shovel work I could do at the moment. 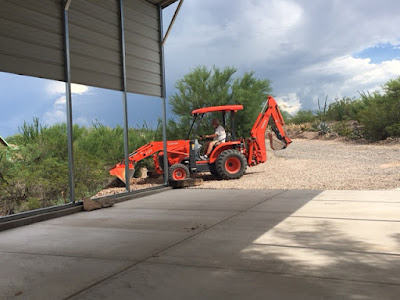 A little later when it was hotter and more uncomfortable, I began moving it around and down the hill.  I have to say I really do like hard work.  Might have been nicer to be cooler, but it makes you so much stronger.  Even swatting the flies and gnats will help get me get in better shape.
By the end of the work, I was pretty tired, although feeling MUCH better than the day before, but I didn't get pictures of the finished product.  I'll do that today.
So why is this picture here you ask?  It seems I can't get away from the Magic Castle and BINGO!!!  I got a phone call late Tuesday night I forgot to mention.  The Infernal Machine was being it's usual rude self and they couldn't get it to work.  Somehow, by pushing the wrong buttons accidentally, the machine was requiring Clerk Numbers.  We don't DO Clerk Numbers.
I racked my brain for a minute or two while chaos and yelling could be heard over the phone.  Ding ding ding!!!  I remembered ... told them which keys to hit and VOILA! ... the Infernal Machine sprang to life and they were back in business.  It's nice to be needed. 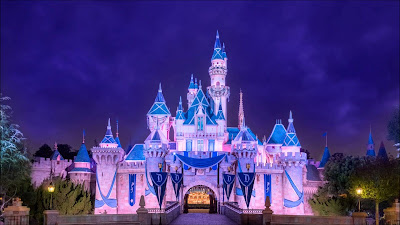 As to those smoking ribs I was working on .... they came out maybe a tad overdone.  I was way late in getting them in the smoker, so I upped the temp to 250.  That certainly did help out in the smoke department, making it easier to get that delicious flavor.
It also makes it harder to know when they are done.  Using a temperature gauge does not always work well.  At any rate, they were pretty tasty.  I gave half to the Chance household. 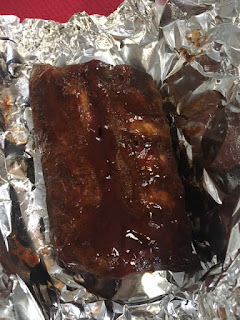 There's a little more rock work to be done this morning, and I hope to borrow a wheelbarrow from Mr. C so I can move some of the leftover rock to my front yard.  Now that the back yard is up to snuff, I need to fix the flooding in the front.

Time will tell fairly soon if our hard work does the trick.  More rain is expected every day with a gully washer tomorrow or Saturday.  OH BOY!!!

Posted by Nancy Kissack at 5:45 AM