It took a few days.  I think it must be bad enough to take your children in for dental surgery of some kind, but at least they can talk to you, even if it is with a mouthful of cotton.  These fur kids ..... you have to be a mind reader.

Poor Cooper wasn't in very good shape.  He wandered around like he knew he lived here, but couldn't figure out just which way to go to get to the kitchen.  Luckily he slept pretty good the first night, but ate nothing.  No surprise there. 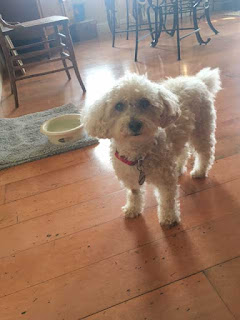 Next day he figured out where the snacks were and sat barking for one, but apparently nothing smelled good.  I began to worry when I noticed his eyes were not fully open.  That's weird!
By noon he remembered this little antic.   Go hide.  I kid you not .... he hides in this hallway until I realize I haven't seen him in awhile and go looking.  Maybe he's hungry ... my little brain was racing.  I tried three different cans of dogs food, home cooked chicken, home cooked beef and hard boiled eggs, at which his nose went up in the air and he looked away.  Okay then.
Finally, in desperation since he hadn't eaten in over 34 hours, I scrambled an egg.  That usually gets him.  He ate half and went to hide in the OTHER hallway.  Come on kid .... you're killing me!! 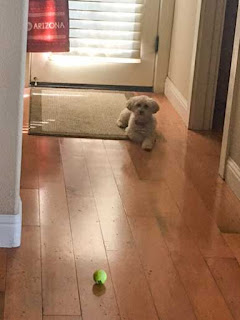 This was Bingo night and I had to leave him alone for seven hours.  Maybe a walk outside.  It was pretty hot ... we got all the way to the end of the driveway before he plopped his butt down and gave me THAT look.  I'm done Mom ... carry me!!!  Which of course I did, like any good puppy Mom. 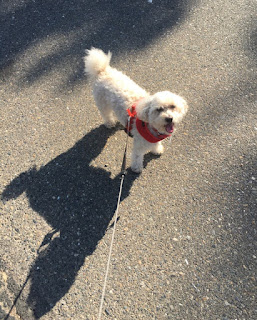 He was pretty happy to see me when I got home from Bingo and he appeared to be a little better.  A second good night's sleep and maybe he'll be recovered.

Yesterday morning he sat in the living room and barked.  Just like a "pointer", he will freeze and point to the ball if it's where he can't reach.  It's always there, even if you can't see it.  He's got a nose like a drug dog and he's NEVER wrong!!  Back on the floor I go in the downward dog position until I finally spot the ball.  He grabbed it with relish!!  YAY!!! 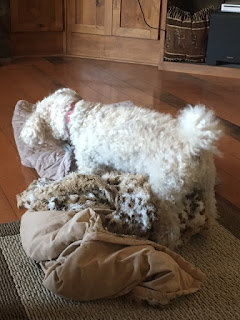 I was really happy to see him doing his normal morning ritual.  He sets the ball down, grabs a mouthful of blanket and covers it up.  Then the digging begins as he tries to find it again, only to repeat the performance ... time after time.  He's weird, I tell you!! He's BAAAAACK!!  My little kid is a happy camper again, eyes wide open and doing his best say-cheese impression.  He even ate, but of course I had to cook up some special hamburger and rice, dotted with bits of beggin strips.  That's the equivalent of ice cream!! 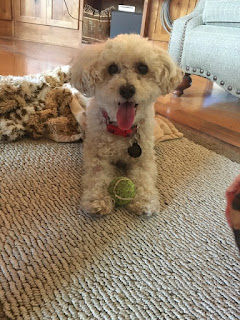 So today I'll have him help me figure out why my garage door opener light isn't working.  That's a first since those things have always lasted forever.
Then it's time to start making up all my lists so I get everything packed.  It's almost time for that epic trip through the desert heat.  I expect I may be driving night and day just to stay inside the air conditioned truck.
Oh ... and don't worry ... there is ONE MORE BINGO NIGHT before I go!!!
Posted by Nancy Kissack at 5:37 AM