Now THAT Was A Gully Washer!!

I think I'm in a state of shock.  You cannot even begin to imagine the storm that came through last night.  How in the world can so much water fall out of the sky??  No kidding, it was like standing under a waterfall.

Just as I fell asleep, the lightning and thunder began.  This wasn't your ordinary variety .... this lightning was immediately overhead and it was blinding, lighting up the inside of my house brighter than daylight.  At the same instant the thunder was so loud it was deafening, actually hurting my ears.  It shook the house and rattled the windows every single time.

I tried to get a picture off the patio, but couldn't see more than 20 feet.  It went on for well over an hour!!  As I sit here this morning with the patio door open, I can hear rushing water from the big wash below as a river runs through it.  In the years I have been here, there has NEVER been any water in that half mile wide gully.

That storm is now swirling south around to the left of us making for a lovely 72 degrees.  It was NOT lovely trying to sleep.  I was awake all night long.  I went out at 2:00 am to check my tarp placement.  To my amazement, there were barely rivulets running across the driveway.  I expected a river like what I hear below the house.  How could so little water do so much damage?

This morning, everything is still intact, not much the worse for the rain, with the tarps still in place.  Probably not the same guy as last time (same picture though) but a tarantula was parked under the RV cover out of the rain.   Smart cookie.

It will be overcast and rainy all day, with another gully washer arriving at 1:00 am.  Rain will continue all day long Saturday and Sunday.  Maybe I can get a picture of the "river". 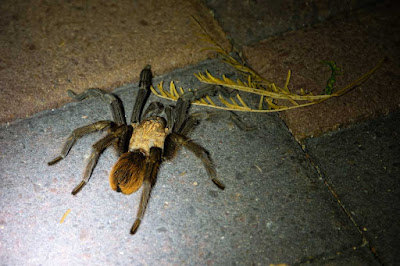 Back to the Empire Ranch ... this is the headquarters where they fought off Indians and cattle rustlers in the old days.  I drove around back to find a host RV.  That's surprising ... I've never seen one here before. 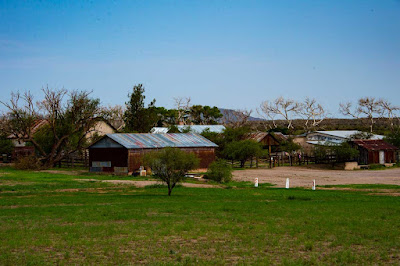 Here's a new addition ... a sign warning of rattlesnakes!!!  Yikes!  That's not exactly what you want to see when you are planning on exploring said house.  But that's tomorrow's story ... because what happened when I got home was much more exciting! 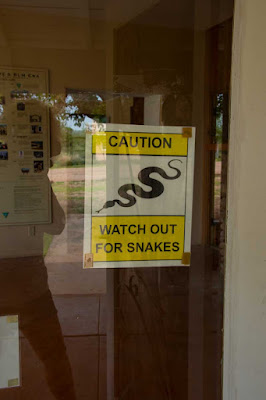 Yessirree Bob .... that's a rattlesnake in a rat trap.  I keep two traps UNDER MY HOUSE!!  Every so often, I pull the heavy metal screens and check for eureka moments.  Hmmmm that's weird, it looked like a squirrel all wadded up.
I probably would have died a horrible heart attack death if it had been alive.  And look .... somehow it got halfway INTO the trap before it snapped.  My heart was racing as I gingerly picked up the trap and threw it on the patio.  Obviously, it's been there for a long time. 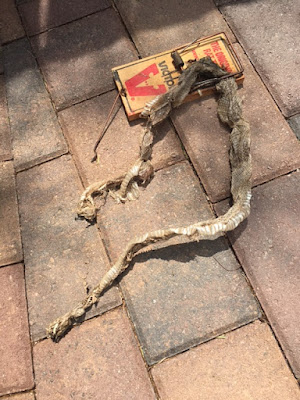 I checked out the head.  Yup ... that looks like a fang right there, and two eyes.   I checked it's tail for rattles.  Since it's so long, it's obviously a big rattler.  To my surprise however, there were none.  This is apparently another of the rare (not so rare here) Sonoran Lyre snakes that has decided to grace my back yard every year. 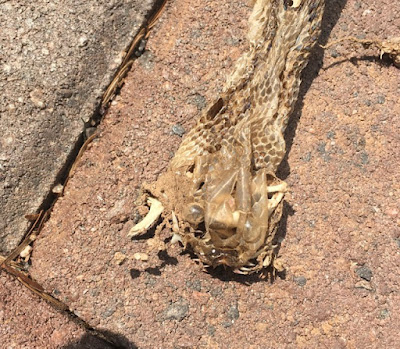 So sorry Charlie .... not really sorry at all .... that you got caught in the trap.  Mr. Chance warned me that he had caught one or two under his house in rat traps, but I never expected it here.

Well THAT was an exciting find, however completely overshadowed by the gully washer.  As I type, the river sounds are dying off a little.  The quiet before the next storm.

By the way, this is the only reason I survived the massive flooding that was predicted.  I ordered a HUGE pizza and nervously ate half of it so the water wouldn't wash me away.  I must weigh 30 pounds heavier.  The good news is I have half left for the next big storm coming in this evening. 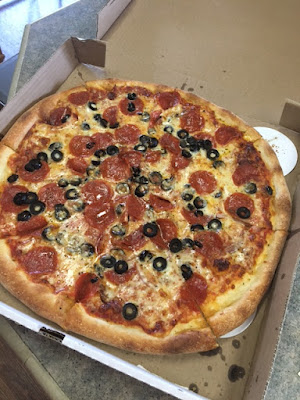 In the meantime, Cooper and I will be trying to catch some Z's during the day, since there's no way you can sleep through a storm of this caliber. 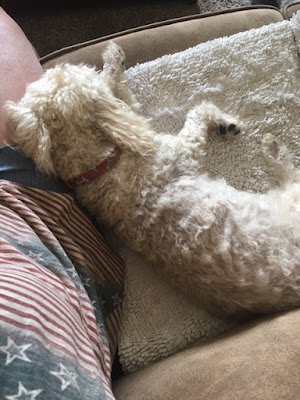 But first, I'll be outside tidying up the corners of the tarps.