I really did want to get out of the house.  I had plans.  In the end however, my brains kicked in and decided there was just too much water everywhere, even for a 4-wheel drive truck, and I better just park myself at home.

I couldn't help it though, the lure of rushing water is a magnetic draw.  I did make a quick trip down to the dry river bed.  It's never had a drop of water since I've been around Arizona.  Apparently, THIS is why it's here.  The rushing river sound hit's my patio like in the old days when we lived close to the Kern River. 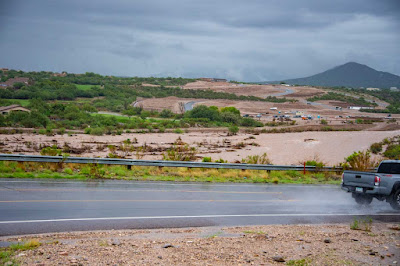 Uh huh ... that's a lot of really dirty water rushing down the dry riverbed.  Most of it is out of sight just under those green bushes.   I had climbed up a hill on the side of the road and was perched over the edge.  Going further was not an option.  And just look at all the green.  The desert cleans up nicely in her monsoon colors. 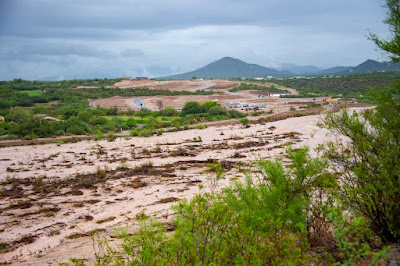 It rained for almost ten hours straight.  We seem to have been in the center of a hurricane like storm that just kept circling over us hour after hour.  I do think about all the critters that live in the river bed.  Hopefully they had plenty of time to escape, except for the scorpions.
Life goes on however and this turkey vulture kept flying around all morning looking for lunch.  As I drove back home, he landed on this wire and was trying to dry his wings.  This stance didn't help much because it was raining the entire time. 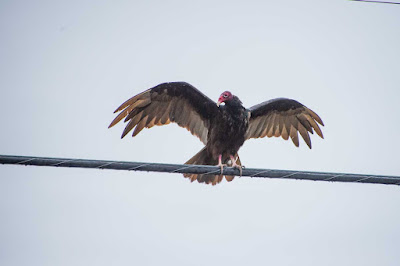 In case you've never seen one up close ... a face only a mother could love.  Look at those claws. 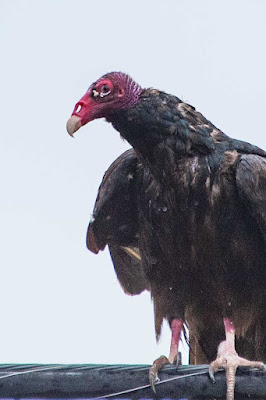 I got home in time to see MY river running across the driveway.  The tarps held up and there wasn't too much more damage.  It's all fixable, just a little work. 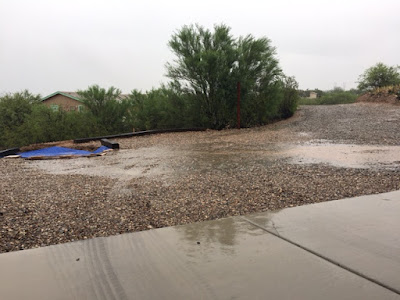 That's when I found the flooding out FRONT of the house.  Something will definitely have to be done here, but I have no idea what.   Possibly a concrete gutter running the length of the patio cover. 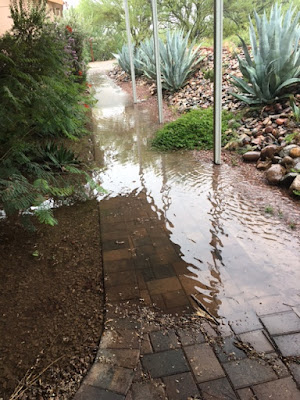 For the time being, I just dug a little ditch to drain it off.  In no time, it was gone.  The soil here is pretty porous and puddles don't last long at all. 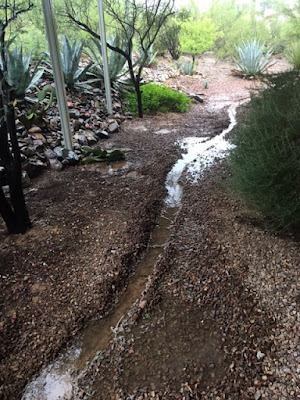 All this rain hasn't bothered the hummers one little bit.  They continued to fly all day long for sustenance.  There weren't even the normal fights over whose feeder it was. 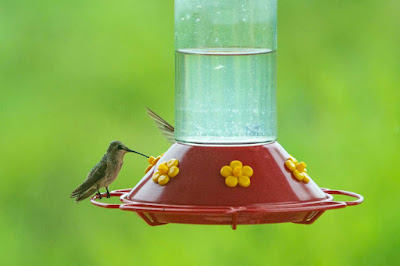 This is one last look across to the Santa Catalina mountain range where I could see six waterfalls coming down the mountainside.  It's amazing to see this since it's so very far away.  That's a lot of water. 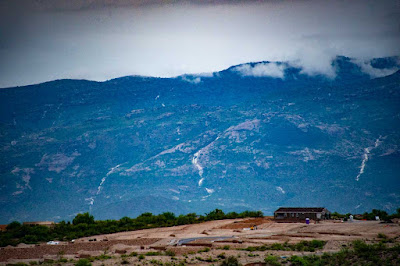 The weather guessers (who are actually pretty correct around here) say there are chances of storms every day this week, and another gully washer coming in next Monday.  At the first sign of sun, I'll be off to pastures of fabric.
Posted by Nancy Kissack at 5:28 AM