Everything You Wanted To Know About TNT

Back in the days of the dinosaurs on the ranch, we didn't have TNT.  We DID have dynamite however, that was used to dispose of large animals that died when we were up in the mountains.  I've no idea why they thought blowing them up was a good thing, but blow them up we did.  Maybe it spread the smell out over a larger area.  Well of course it did, but I'm not sure how that helped.

As a kid, we didn't have the money for fireworks, and once you heard the blast of dynamite, you didn't WANT to hear any more bangs.  We did have sparklers a couple of times, which always resulted in someone getting burned ... of course that was me.

Anyway, out of the blue, I was introduced to TNT yesterday.  When you do a lot of volunteering for the Elks, you tend to not answer your phone, especially on holidays.  I was pretty bored ... and completely forgot my cardinal rule.

It seems the Elks Fireworks Booth needed help.  This was my first ever foray into TNT.  You've seen them everywhere for the last 30 days.  Fireworks booths set up all over town. 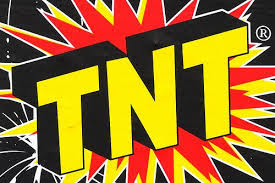 It's pretty good fund raising fun when it's not 100 degrees and sweltering.  When it's not busy, two people work inside and three watchers watch.  For what, I've no idea ... we just sat there and watched and welcomed everyone in with a Happy Fourth.  Notice the buy one get one free?  Two ... there were only TWO items of that nature.  Sparklers and something called Purple Rain. 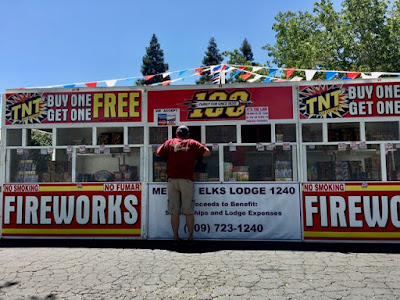 I quickly became familiar with the names ... 49'er, Family Pak, Good and Evil, Delirium.  Not so easy was figuring out the credit card machine.  After a couple of what-the-heck-do-I-do-now moments, I finally got the hang of it. 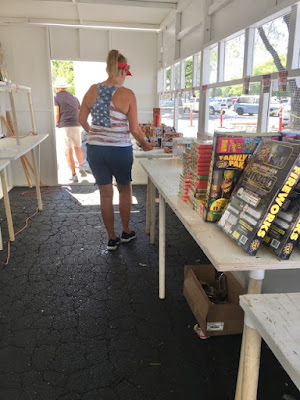 The best part was watching the kids faces when they came up.  So here's how this works.  There were about ten booths in our small town, all of which are charity fundraisers.  No commercial sales allowed.  The other good thing is that everyone is charged the same price and every charity sells their fireworks for the same price.
Of course it's all made in China, which is rather frustrating, but oh well.  They were nice enough to send out a pre-notice that not much product had been made and shipped this last year, making prices sky high.  It didn't seem to matter to most folk.  Prices for the packs ran $50-90.00.
The largest package of Fourth of July screaming noisy fun actually cost a whopping $799.00.  I kid you not, they gave us four of these huge boxes and we sold every single one. 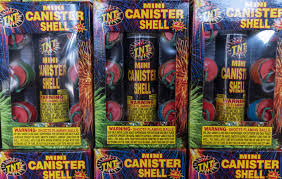 I have to admit, I'm a sucker for little kids.  Two families came up looking for something, but it was all too expensive except for the sparklers, which are nothing like the old days ... not even a little bit.  You got six little packs (no idea how many sparklers) for $15.
They were pretty surprised when I threw in a $59 family pak (which I paid for later).  The little girl had a big smile on her face and wanted her picture taken with me.  The thing is, she will probably remember this 4th of July for a long time.  I told her to do something nice for someone else when she could.
You just meet the nicest people.  The next time it was a gentleman and his young son who just moved here from Joshua Tree for his new job.  Let me just say I did NOT give them the delirium ... at a cost of $65.00!!!!  No matter, we sold out of these too. 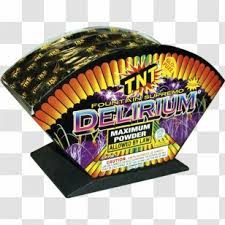 The really cool part was the new Elks Manager of the booth had never seen that before ... and soon, he followed suit.  I just love it when that happens!!
In case you were wondering, THIS is what they want you to think their fireworks looks like. 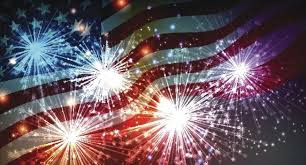 In reality, this is more like it, but great fun for the kids, nonetheless. 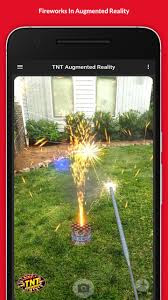 After learning everything fireworks with big bangs and piccolo Petes, I finally left the sauna pit after six hours.  I'm happy to say we sold out almost everything.  Lucky for me, most of what we sold was NOT fired off in my back yard like usual.  Oh there were quite a few bangs around the neighborhood (like 85 per minute (yes I counted), but nothing like last year.
I did love seeing almost everyone with a truck sporting an American Flag and surprisingly, about half the folks were dressed up in red white and blue.  It was a GOOD DAY!!
Posted by Nancy Kissack at 6:32 AM