As I sit at my kitchen table, I'm watching lightning hit the mountains across the dry river bed.  I would much rather be outside taking pictures, but my tripod escaped my view and didn't get in the truck.  To be honest, I thought it was already here.

That initiated an hours search on the internet for a suitable not-expensive model to arrive today.  Hopefully I will have some great lightning pictures soon.

In the meantime, I spotted this guy trucking across the dead end street near the Chance Ranch.  He's about 10 inches across, a little worse for wear around the edges, but a beauty nonetheless. 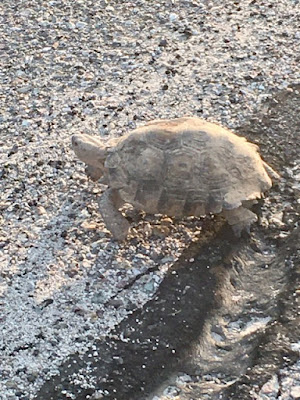 He stopped as I got within four feet for a picture ... say cheese little buddy!!  Then he continued on up the hill.  I stayed and watched until he got completely across the pavement and under a tree where he began chomping down on some dry grass.  I just didn't want anyone to run over him. 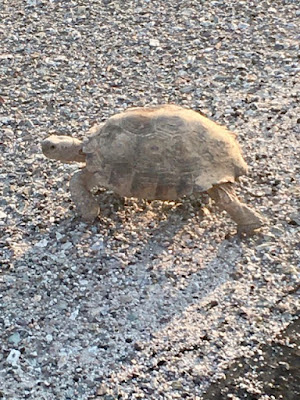 First on the to-do list was to get my truck tags.  I received my notice which said a smog test was due.  The good news is there's so much California smog crap on this truck that I knew it would pass.  Last year however, all they did was plug in to the computer.
I arrived at 9:30 to find I was car #30 in line.  Problem is, once you are in the new long driveway, there's no way to get OUT except through the smog building.  I waited ... and waited.  It took over an hour before the guy waved me forward.
He asked if I wanted to drive it or let him do it.  WHAT?  This time it seems I had to have the tires on the big roller thing, put it in drive and hit the accelerator.  You watch a screen which shows your speed.  Keep it between 47 and 53 he said.  Do you have any idea just how hard that is to do?  Especially when you are wearing ill-fitting sandals.  At long last I got it.  He said those magic words  YOU PASSED!!
Here's even MORE good news.  My California registration would have been $400 this year.  Here, I got my little 2005 3/4 ton pickup registered for $72.55 ... FOR TWO YEARS!  That's over $700 in savings. 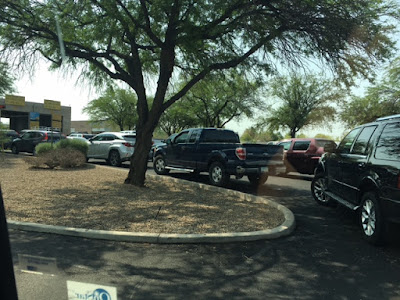 YAY!!  Let's celebrate!!  I headed straight for the fabric store.  What should my wondering eyes see as I tried to peek over the way too large mask they forced me to wear, but THIS new pattern.  Wait til you see it finished.  Adding to my collection, there were three more pieces of fabric to finish off another one.  Nancy is a happy camper! 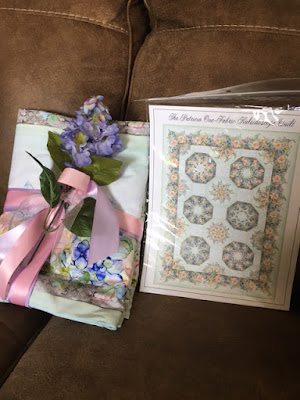 Dinner took a little preparation.  The Chance Ranch has been growing vegetables in their raised flower beds.  Patty said her squash was growing faster than I was driving to get here.  This is only ONE squash, turned into calabacitas, complements of Elva Shannon.
I did tack on a little extra by roasting the tomatoes in the oven for 20 minutes before tossing them in a food processor with some cooked onion to make the sauce, and roasting the corn on the cob.  That was pretty exciting.  I just laid the corn on the burner and it popped like crazy, sometimes sending bits of corn spraying across the kitchen.  Think popcorn!!  It's a good thing it turned out really good because I have enough for six people. 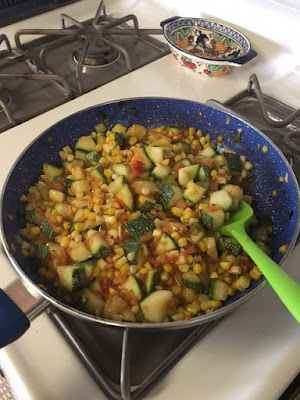 Cooper and I spent the rest of the evening playing the catch game.  I bounce the ball off the coffee table and he catches it .... mostly.

Today I hope I get to work on those big camera pictures.  You may remember I now have to have a subscription to the big cloud in the sky for photoshop to work.  It has decided it doesn't recognize me any more.  I'm sure that will take a day or two to beat them into submission since they already charged my credit card!!!