To Trailer or Not to Trailer

THAT is the question of the day.

It's been a rather nice week, with the summer sun taking a break here and there.  I've cut back on the AC since getting a notice that my bill will double this month.  Always good news, right?  I refuse to let it bother me any more ... mostly.

With Bingo behind me, I'm looking forward to one more meeting before escaping the valley, or at least that WAS the plan.  I even have the rig partially loaded.  Then I made the mistake of checking the weather along my route.  116 in the desert shade.

SO ... I have three choices.  I can leave tomorrow and end up in the sweat box known as Quartzsite for the night where I won't sleep a wink due to the heat, OR I can leave tomorrow in my truck and stay in cooler air conditioned hotels (this one is leading at the moment) ...... and the last OR ..... I can wait until Wednesday of next week when it will cool off a tad.  So what say ye my RV friends?  Trailer or not to trailer?  What would YOU do?

In the meantime, Cooper and I have been taking morning walks in the cool air.  On occasion, we have found neighbor Halo cruising his territory which is actually my side yard. 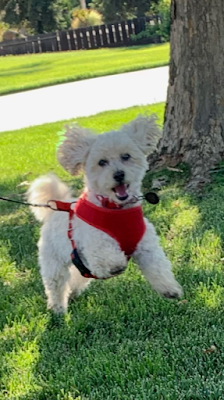 He cries little dog sounds until Cooper comes over to play.  Yes, Cooper remains on a leash with me running madly behind him trying to keep up.  Did I ever tell you about the time he got away when he was a puppy?
In oh-so-hot Lake Havasu City, he squeezed between the bars of the Chance back yard gate.  He's a runner.  Let's play the chase game.  You run after me Mom and I'll run away as fast as I can.  Two hours later as we drove the entire neighborhood, he was not to be found.  I figured him gone forever. 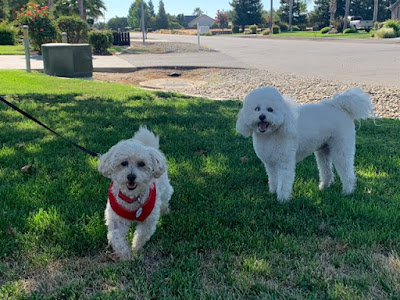 I went inside to report him missing (he's chipped) when a neighbor spotted him on the front porch before running off yet again.  I grabbed Miss Jessie and ran as fast as I could to cut him off behind a house.  When I finally caught up to him panting in the shade, I called quietly to him.  He turned to run away again, so I literally threw Jessie about ten feet towards him.
Oh .. I know THAT dog ... he turned around and I was able to snatch him up.  Ever since, he has literally never been off leash unless in my Fort Knox back yard.  Obviously he survived after I dunked him in water to cool him off.
This is the game .... they played race horse for 20 minutes before running out of air.  Yes I did finally have confidence that he wouldn't disappear, and I removed the leash for all of 4 minutes.
Mostly because I was exhausted trying to keep up.  They had a fabulous time, bringing smiles to my neighbor and myself. 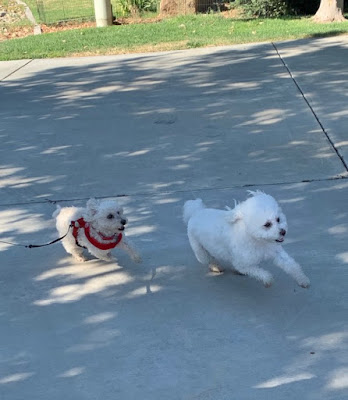 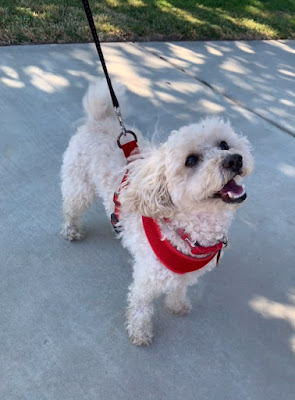 Cooper is already chomping at the bit to go out for a morning smell-fest, so we are off before the gardeners show up.  Hopefully I will make some sort of decision by tonight whether to trailer or not to trailer.