It was a work-your-butt-off day ..... as even MORE rain fell in the afternoon.  First thing, Mr. Chance and I went to order rock from the sand and gravel business.  Back in prehistoric times, I weighed out and sold  thousands of tons of rock.  1-1/2 inch sold for $3.50 a ton.  The same size crushed concrete now sells for $8 a ton (at least that's what I think they said since my brain got overheated a little later).  Trucking which used to cost $55 an hour is now $90.  Our drivers were paid $10-12 an hour.  That's inflation in 25 years. 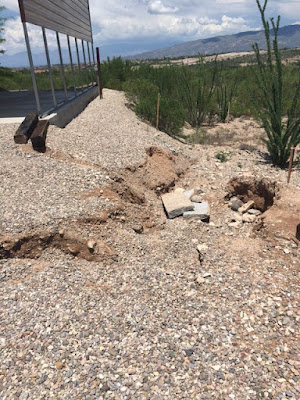 While waiting for the rock to be delivered, Dan worked on the washout.  We wrangled some concrete and moved a little dirt in 92 degree weather.  I'm sure we were out there two days, because I was exhausted and HOT.  I hate getting old!!

At last it was done until the rock arrives today.  I cleaned up some dead branches here and there before plopping on the couch.  In spit of Cooper's pleas to come play, I just couldn't do it.  It's pretty disheartening to know you used to run 26 mile marathons and now need to sit on the couch after only two hours of work. 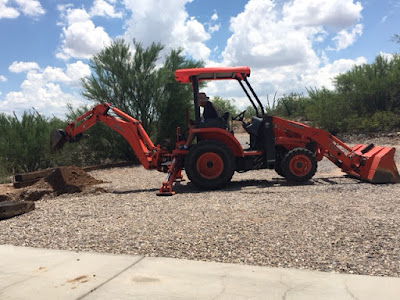 Just after lunch, the thunder started talking to me.  Rumble rumble grumble!!  A couple big cells were swinging around the neighborhood. 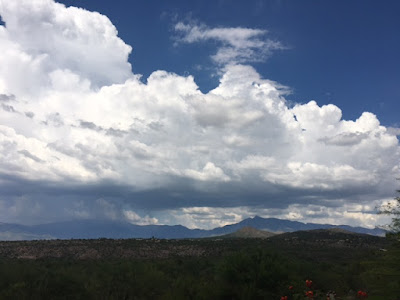 Luckily, this missed us as it headed west.  I could hear the river rushing again this morning, although not near as loud as previously. 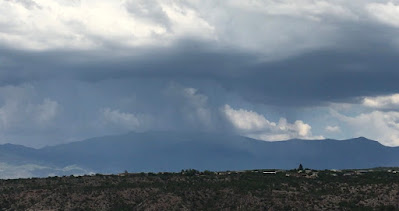 Having defrosted some baby back ribs, it was time to set up the smoker.  Actually, two hours PAST time.  I rushed them a little and eventually had to move the smoker since rain and smoking don't mix well.  I'll report on those tomorrow. 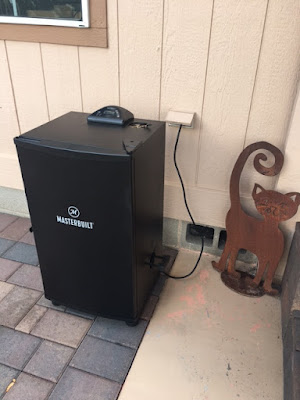 In the meantime, I walked around surveying the rain damage here and there.  This poor bush got smashed by a chair in that last big wind storm, but it's certainly happy now!!  In two days it has bloomed magnificently. 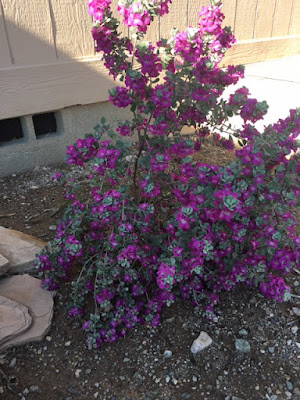 That's when I spotted THIS!!  I'm so very excited.  I saw Momma Hummingbird on her nest, looking like she was feeding.  That could only mean one thing!!  I waited patiently until she flew off, ran up with my phone camera and stuck it over the nest.
Sure enough ..... WE HAVE A BABY!!  Now to see if the other one will hatch.  Hopefully this year the darn roadrunner will stay away.  From now on if I see him, I'm chasing him off!! 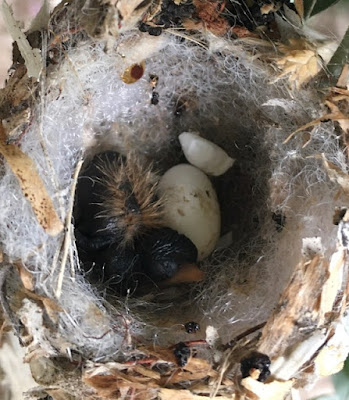 The rock should arrive this morning, so I better get to it.  With company coming, I actually have to get dressed in something presentable ... you know without big holes in the shirt.