Sometimes nights can be more interesting than I can appreciate.  Apparently the super monsoons have arrived in Arizona.  At some point in every day Mother Nature puts on a lightning show and waters her garden.  It's past due, so I can't complain.  I do love a good thunder storm. 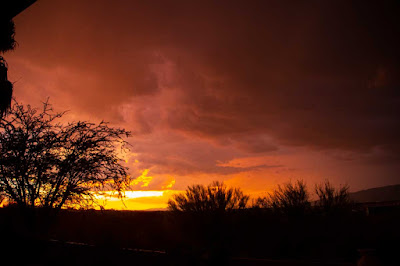 I'm not sure what time it began.  Cooper was acting weird.  It's really too bad my #1 son can't talk.  He refused to go to sleep, getting wet nose to nose every few minutes.  We were up four times when I finally gave up and parked on the couch.
At some point we both went to sleep, but Mother Nature had other ideas as strobe lights hit my windows.  I finally took a pill and tried to sleep to the pounding of rain on the roof.  Suddenly it was time to get up.
I wandered through the North forty (actually only two) to see what might be blooming.  After all, it's rained almost every single day.  There are several downed trees and cactus turned on it's head ..... and then there was this!  Six beautiful little balls of green with bright pink flowers. 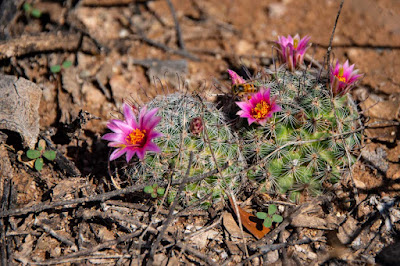 The ocotillo are taking full advantage and leafing out like never before.  Things are growing by leaps and bounds. 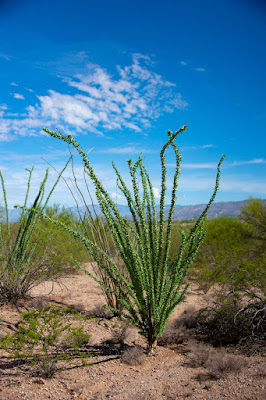 On the other hand, my little rut has turned into a chasm.  No worries, it's fixable, but in Mother Nature's time.  There are dangerous thunder storm warnings for the next seven days.  I've gotten more notices than I ever did about tornados!!  Someone is making up for lost time!! 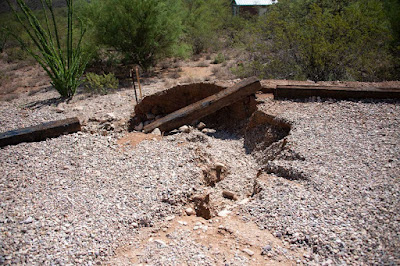 Here's a warning many probably already know about.  Walgreens basically threatened me with extortion.  Well not exactly, but that's what came to mind as I made my purchase yesterday.  I picked up two bottles of vitamins.  The sign said $15.00 each.
Funny, when I got to the checkout counter, they magically turned in to $25 each, with a total bill of $61.00.  Wait ..... I saw $31 flash on the screen.  If you "sign up" and give them your email address, your full name, your phone number and your zip code, they will give you a $30 credit.  Otherwise, pay up!!
Luckily I passed on the razors at $15 a bag or I would have had to borrow money from a loan shark.  Really Walgreens??  So like any good person being fleeced, I signed up to get the discount.
DO NOT do what I did.  Instead, go across the street to Safeway (or wherever) and pay only $12 for those vitamins.  By the way, I purchased the razors at Safeway for $10.  Fair warning ... there are crooks out there.  I would also note that some time ago, my prescription at Walgreens was $175.  It was $30 at Costco. 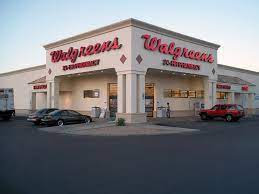 Amazingly .... sometimes the world clocks come together .... I passed by El Toro Taco Shop at exactly 12:00.  These are chicken corn street tacos, probably the best tacos I've ever eaten in my entire life.  I spent the next hour giving the sauce the complete taste test so I could duplicate it at home.
I think I've come close ....... mayo, lime juice, smoked paprika, chipotle powder (of which I happen to have half a pound ordered by mistake on the internet) and a little water to thin it out.  I made my own last night and I got an A+!!! 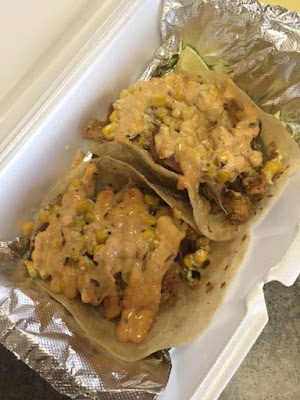 The other secret to these is the paper thin old fashioned hand made FLOUR tortillas.  Another rip in the earth's continuum had me standing in front of a bag of them at Fry's grocery store.  I don't even have to make my own.  Now I can sit on the patio and eat Class A homemade tacos.
It's time to check out the game camera to see if it survived the storm and mow the 4" tall grass.  Won't that be ducky!!!!  Then it's off to Empire Ranch for a look see, assuming of course the next storm holds off for a few hours.
Posted by Nancy Kissack at 6:01 AM