I spend a lot of time in the Arizona desert.  Life with cactus can be difficult and painful.  For me, it seems the painful comes quite often.  You would think I would be used to it and take precautions.  I do ..... and it doesn't help.

My first excursion of the day was to check out the front walkway, now covered in mud from that last big storm.  To my amazement, I found a hummer's nest in this bush, about the same place as the last one devastated by the road runner.  How they survived that wind storm, I'll never know.

To make it even better, there were two tiny eggs inside.  This picture had to be taken through my sewing room window as Mom is very skittish.  I'll keep you posted. 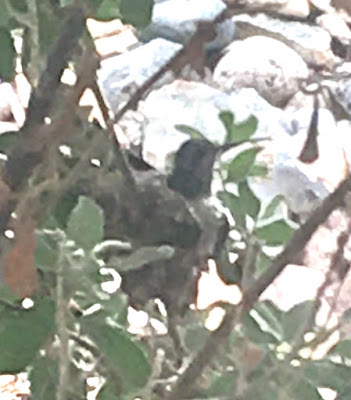 As I wandered the back yard, I noticed my prize prickly pear (least that's what I THINK it is) had fallen over.  It was devastating!!  This is my most beautiful one, almost six feet across and five feet tall.  These things weigh literally a ton.  Especially now since they are completely full of water, having sucked up every drop they could after the dry spell.
There was no way I could stand it up, so I grabbed my trusty butcher knife and thick leather gloves.  With surgical precision .... not hardly .... I cut off limb after limb, trying to save the best of it. 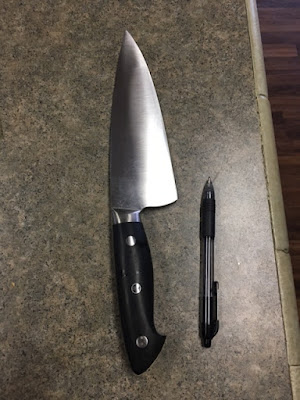 We lived in the high desert when I was young.  Mom used to transplant pieces all the time.  She cut them off with a knife and plunked them in a hole.  A month later she had a new plant.  Why cactus?  Because she made prickly pear jelly.  Funny how I turned out to be allergic to it.  Anyway ....... 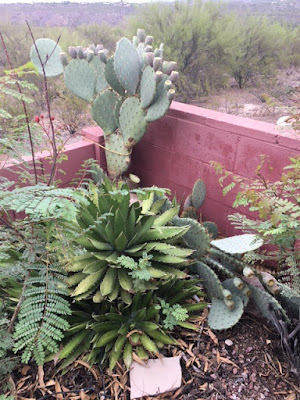 I figured I would try it too.  There's no loss if it doesn't work out, and if it does, I just got three new cactus plants for free.  The surgery went well, but the leather gloves didn't keep me spine free.  In fact, they went right through those gloves like butter.  Ouch!!  OUCH!! 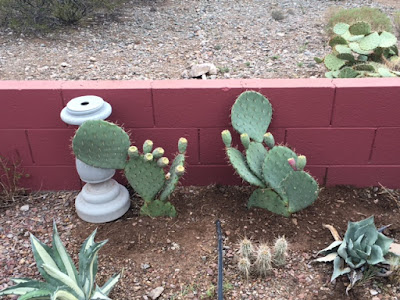 Yup ... I was ill prepared as I continued to work in shorts, a flimsy top and flip flops.   I kept getting caught on something every time I leaned over.  I think I spent more time trying to remove spines from my fingers than I did replanting!!
Each section probably weighed over 20 pounds (heavier than Cooper), so lifting it up was a delicate business at best.  By the way, don't bend over to pick up those pieces unless you know where you butt is going to land.  OUCH!!!
I transplanted the two chunks in the above picture, then this even larger one across the yard where the dead rose bush used to live.  That was another whole 30 minute OUCH story as I tried to dig it out. 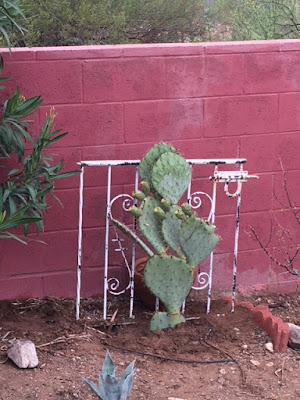 Finally ... with not much left (see the top cactus picture) I was able to string a rope around the cactus belly and lift it back up to the wall.  I tied it off, being relatively sure it won't stay that way through another storm, and stacked the front with rocks to hold it in place.  I don't really have much hope for any of these, but at least I gave it a shot.
With that done, I landed inside for the rest of the day, picking out pieces of cactus spine.  How in the world did I get not one, but THREE of them stuck in my belly?????  I gingerly pulled them out with pliers.  I kid you not, these are tough darn cactus spines.  I was lucky that my tweezers got all five of those plunged into my fingers.
Cactus spine free, I whipped up another batch of avocado to freeze.  I could buy it already prepared, but they don't taste as good as fresh.  These just out of the freezer, I dump them in zip lock bags to eat later.  No throwing away gunky avocado any more. 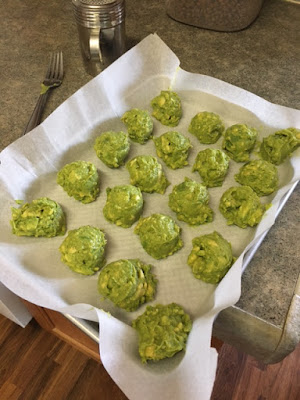 Here's my last tip of the day, other than STAY AWAY FROM THE CACTUS ... I'm not a Ranch dressing fan.  Weird, I know, since everyone loves Ranch.  I spotted this chipotle one the other day and with great trepidation, decided to give it a shot on my taco bowls that I love for lunch.
WOW was it ever good!!  Not the least bit hot since I'm such a wimp in that department, but all the taste.  I'm buying a case for the cupboard. 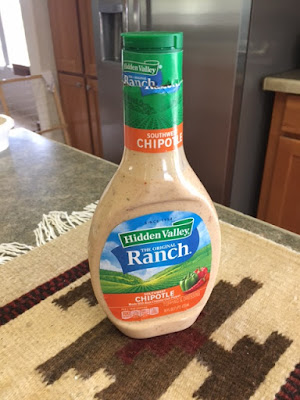 The weather hasn't been bad ... a little sprinkle of rain every day, overcast and a little muggy, but hanging in the 80's.  If it weren't for the threat of flash floods, I'd be ghost towning.  Soon I hope .... SOON!!

Posted by Nancy Kissack at 5:27 AM