I was serenaded by this beauty in the morning.  Although I don't see them very often, this guy stopped by and hung out for quite some time.  He looks a little worse for wear, which is probably why he was trying so hard to attract a female. 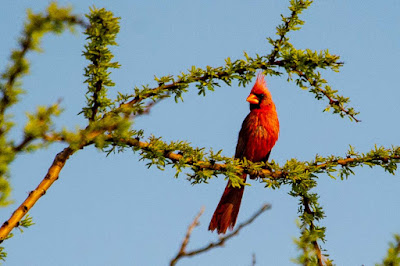 You can see his beak open here as he sang his most glorious song.  Speaking of glorious, it rained almost all day long.  That kept the temps in the 70's and my door open.  Although that made for a very cloudy day, it was a magnificent change from 110 degrees. 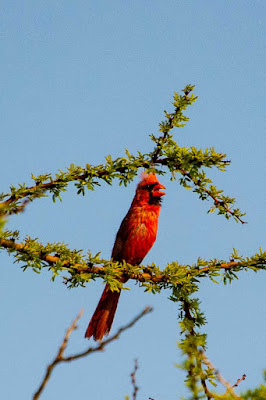 I've been setting up the game camera almost every night.  I have discovered a weirdness.  The rabbits come out every three hours to drink.  They scan the territory, hit the water tank, then scurry off.  Yup ... every single night, every three hours.
Here's a critter I've never seen before.  You may have to double click on this one and look to the right.  As the bunny goes left around the bush, two little eyes go right and to the front.  There's a tail that he wiggles like "take this ... I'm in your territory!"  No idea what it is, maybe a baby antelope squirrel?
My favorite coyotes are still hanging around, although this one looks a little worse for wear.  I also think this poor baby is prego.  She's a young one and too fat to be that skinny.  Her bigger Mom or Dad joined the drink fest after this video stopped.
Good news, just as the rains (and lightning) seem to be stopping, my new tripod arrived.  And boy is it ever a nice one.  There were too many to pick from, so I called BH Photo (in New York), the best place to purchase anything photography.  Nice Jewish folks they are, very helpful and most importantly, knowledgeable about their products.  If I need, or want, anything, it comes from them.  They also have the best prices around. 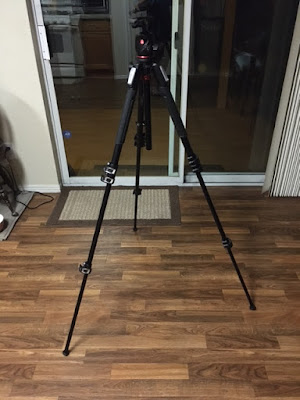 Early morning, I took off for the hardware store, which has recently doubled in size.  My California Ace hardware is a tiny hole in the wall.  THIS store is HUGE and full of everything you could ever want.  I wanted another water shut off and a new GFI outlet.
I'm putting on my plumber hat, but the electrician's hat will have to wait until Mr. Chance stops by.  I may take a chance of getting electrocuted standing outside with a metal camera in my hand during a lightning storm, but I'm not taking any chances with electrical wires in the house. 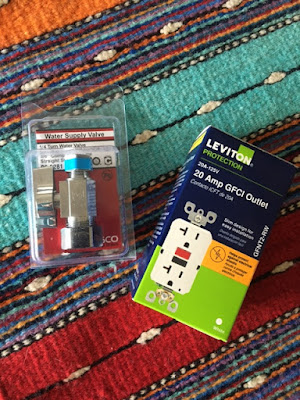 Once home, I whipped up some banana bread for Jonathan.  It's one of his favorites, which I did not bring with me.  I do have a slice now and then, but don't tell him. 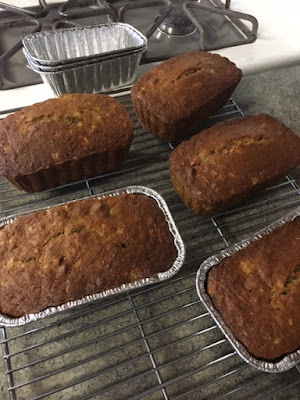 Jon says HI, but wasn't happy I opened his cage for a picture.  That beak says I'm going to bite your finger off if you come any closer ... and he WILL.  He has an aversion to hands getting near, since when he was a baby, he caught something like pneumonia.  I had to catch him every day, twice a day, and give him shots in his belly.  Another reason I can't believe he has lived this long.  He's almost 47 years old. 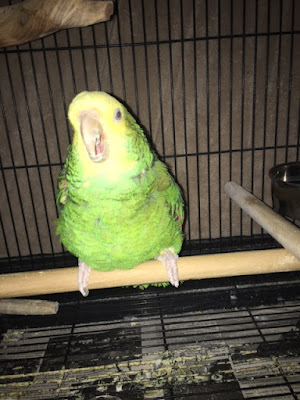 Dinner was going to be fabulous.  Key word, WAS.  I picked up a gorgeous piece of salmon for $12.00.  Since I had leftovers, I waited two days before cooking it.  I stuck it in the air fryer for ten minutes.  For some reason I got a little whiff of .... something.
I sat down ... actually at a table ... to savor a delicious meal of salmon and asparagus.  The first bite went clear across the room, almost hitting the TV.  Cooper jumped up and ran over to see what landed in the carpet.  Even HE wouldn't touch it.  It was badly spoiled.  How could that be?  I just bought it?? 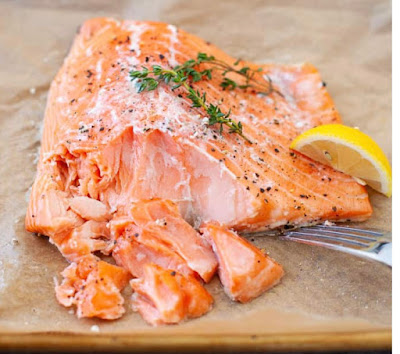 So I became a vegetarian for the night, eating only the asparagus.  This is not a picture of my salmon.  Mine got thrown in the trash before the thought of a picture came to mind.
Better luck next time when it comes to dinner.