Sometimes it's just so crazy, you have to laugh!!  I'm pretty good at letting things slide, but when a group of teenagers began to trash the corn maze, that was it for me.  We chased them off the property.  I don't know why people have to act that way, but it's not allowed at THIS pumpkin patch.

The day started off nice enough with unruly kids and overstressed teachers.  At least I've got the bus drivers trained to pull right up to the unloading zone by waving my arms like a mad woman!!  I even drug out my neon yellow sleeves so they could see me better.

Here's a picture of inside the barn where the kids have their lunch.  I write times and names on the chalkboard to be sure they get in the right spot.  This is the first time I've tried this, and it's working rather well.  Yay!!!  Much better than trying to move 50 kids around to the right area. 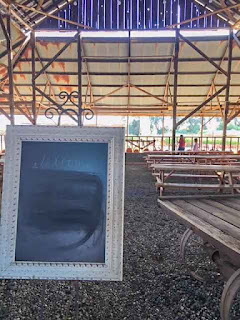 Sadly, it wasn't all good.  THIS time the kid threw up on the bounce pillow instead of the garbage can.  I have to hand it to the two young girls working there.  They immediately cleaned it up and sanitized one whole side.  They got a gold star for the day. 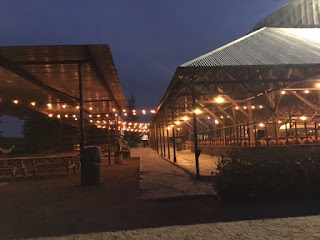 Another gold star went to the new cleanup girl.  You could almost eat off the floor when she was through cleaning up after four schools.  I think we're on a roll!! 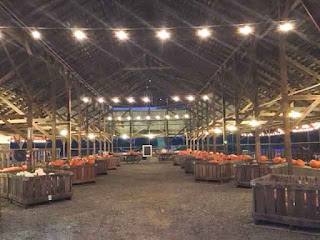 This time only 30 kids came for their after-school program.  They all wanted to hit the corn maze, which covers about ten acres.  I warned them before they entered that it was huge and they might lose a kid or two.  They all went in and one minute later all came back out.  The teacher got the message. 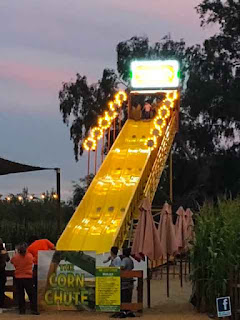 We aren't open after dark, but when the sun goes down, we turn on all the lights until everyone has left.  It's a pretty amazing sight to see.  The huge sign at the top of the slide changes from one brilliant color to another.

Another day, another dollar as we gear up for this weekend.  It's become so popular, we have people coming from as far away as Sacramento and Tulare.  We should have two tractor drivers back today so I get a reprieve from that job.  The best part about it is it's a sit-down job, plus I love talking to the kids about the big dinosaurs.  I've even been known to roar quite loud!!!