I've been called a lot of things in my life, but hot dog girl has not been one of them until now.  It worked out well however, since I was pretty tired yesterday.   I decided I should sit more often and smell the flowers.

This is the first one I took notice of, a cosmos variety.  Isn't it spectacular?  There are literally thousands and thousands of these spread around the property. 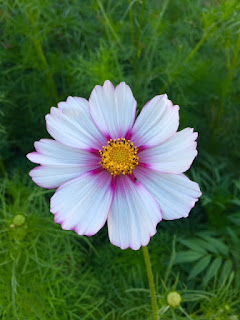 We usually only sell hot dogs and nachos on the weekends, but since so many people purchased them, we thought it might be a good idea to sell them every evening.  Unfortunately, the girl who does the employee scheduling didn't get the memo.

With two separate sides to the snack bar, there's no way one girl could run back and forth doing both jobs, not even me.  Knowing I could sit on a crate most of the time, I took on the job.  Hot Dog Girl it is!!

While another 327 kids roamed around the property, I concentrated on the dogs.  Every time I saw a teacher not only doing her job, but going above and beyond in the do-what-you-are-told department, I made a point of telling them how much that was appreciated.  227 students cleaned up their tables and threw all their trash in the cans.  I LOVE it when that happens.

Back to the dogs, I whipped out 48, wrapping them in foil and praying that I sold all of them.  Worst case, I give them away to the kids who work here, but I'd much rather my guesstimate come to fruition with cash. 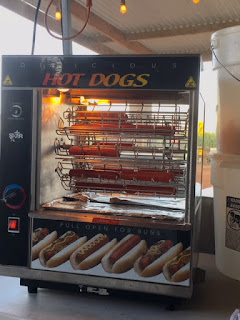 I sold the last dog at 6:25.  We closed at 6:40.  It couldn't have worked out better.  I did have a few troubles with the machine when the entire inside rack fell out tossing one dog on the table.  I ate it, so if I croak today, you'll know why. 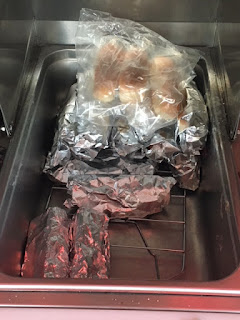 I actually got up off my crate for one more picture of the bees hitting on all the gorgeous flowers.  This time of year the professional photographers come in for pictures.  I've never seen so many false eyelashes in my life, not to mention the shortest skirts with the longest sweaters hitting the ground.  They are all happy until they have to pick all the hay out of their behinds after the hay ride. 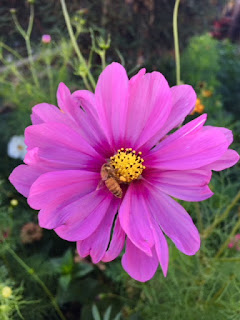 There were no lost children, but two cell phones and three sets of car keys from the 100 parents that came to have lunch at their kid's field trip.  All in a day's work.