Ever have one of THOSE days?  Yesterday was it for us, and I hope we got it all out of our system at one time!!

First, the night guy didn't do his job.  He must have slept through his shift.  From the very start, we were under the gun.  With 300 school kids coming in, we had our work cut out for us.  Although they should have arrived on schedule, all the buses came in the driveway at the very same time.

It's like fighting those tiny dinosaurs compsognathus from Jurassic Park.  They were running every which direction!!  I can only say I have much respect for the teachers.  I could never do THAT job!!

The tractor driver had to take over the night duties, leaving me to drive for part of the day.  No problem, I just LOVE driving through the dinosaur patch, especially when it was overcast and cool most of the day. 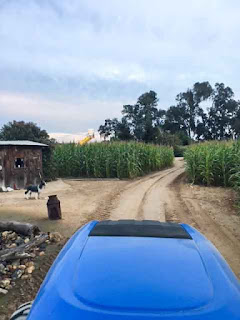 Suddenly we had another dino fight on our hands.  The cleaning ladies didn't show up, nor did they call.  YIKES!!  We all grabbed trash bags and cleaned the entire property including trash cans so full I couldn't even lift the bag out.  I lost that fight, ending up with a chocolate milk soaked tennis shoe and sock.  Yucky!!! 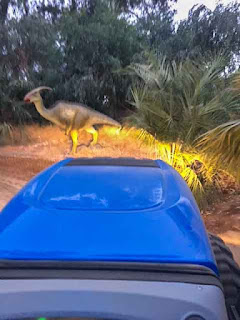 To add insult to injury, someone threw up on one can.  Too much on the Barnyard Bounce I suspect.  Then it was on to the 250 kids coming in the afternoon.  We had to band each and every one of them and of course they all came in at the exact same time.  THAT dinosaur included 41 shaved ice treats, so you can imagine what I did for the next hour. 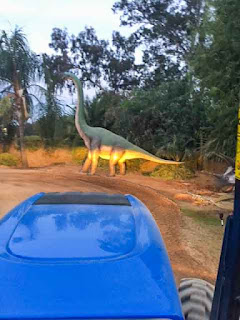 The next fight, which we won by the way, involved the 50 teenagers trashing the corn maze.  Really??  I don't know what happened to the teachers there.  They had no control whatsoever!

The last dinosaur to test our skills was actually a teacher who insisted her 100 kids get a pumpkin.  It wasn't on any of my paperwork, but I took on the fight.  After reaching no one on the phone, I checked through the binder of reservations to find a note that LOOKED like she was right.  I double checked with the Owner (who is NOT the one taking the reservations) and we decided to give them out.  One hundred pumpkins were passed out to one hundred pumpkins in the six year old age group. 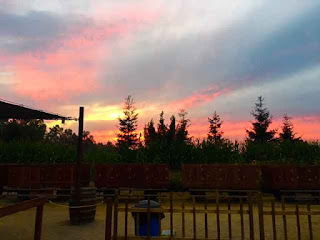 Everyone went home happy while I went back to tractor driving until 6:45.  At long last I only had one fight left.  Trying to get eight huge plastic tarps on the trailers so keep them dry overnight.  You can imagine my frustration, but luckily I beat that dinosaur!!!  I just kept thinking about my nice soft bed!!