That's probably what a lot of people thought back in the 1800's when they ran roughshod over the native Americans living here.  At the Pumpkin Patch, they show the peaceful side of life back in the day.

This is part of the Time Travel Tractor ride.  As they sit in a train, they go through a gold mining scene, as well as this one depicting a very tiny snippet of Indian life.  There's a mountain lion on top of the waterfall heading down over granite rocks.  The kids all scream! 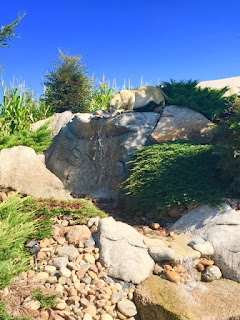 They oooh and ahhh at the deer standing next to the pond.  As a driver, I salute the Indian Chief and point to the wolf hidden in the corn.  Otherwise, most would miss the best parts, there's just so much to see.  More screams ensue. 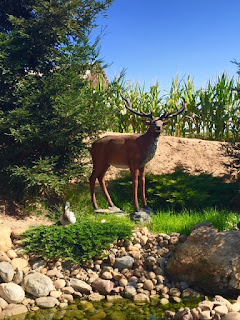 The teepee is totally cool ... I need one in my back yard ... as are the grinding stones, ducks, baby deer and other critters hanging out around the village. 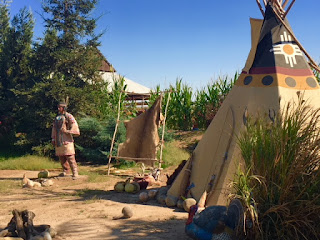 The only reason I had time to get these pictures was because the Billiken Blasters (cannons that shoot tennis balls) had deposited several balls in the mining exhibit.  That rather ruins the ambiance, so I went around to gather them up, along with all the trash that was dumped out of the train.

YIKES!!  I ran straight into an ABC30 News crew filming the exhibits.  No one told me they were there!!!  I quickly disappeared into the cabin and hid until they were gone.  You never know what you will run into when traveling through time.

I spent most of the morning tractor driving, then ushered in 200 students, more Asset kids on huge tour busses.  Two hundred kids got to ride every single attraction (unlike the schools that cannot ride the slide or the zip bee), as well as do gem mining, another thing the schools never do because of the extra cost.

To add even MORE work, the Boss decided we should sell hot dogs during the week.  That opened another whole can of worms, but didn't last long because we sold out of just about everything we had, including chips, fruit snacks, hot dog buns, trail mix and decorated cookies.

With 227 from one school arriving this morning, I've got my work cut out for me.  Yup .. I'm counting the days.