What a beautiful sunrise I got to witness yesterday.  I'm usually still typing away when the sun rises since the patio is too cold for chair sitting.  As you can tell, palm trees were very popular when these houses were built.  Thank goodness there are none on my lot ... they are almost messier than my sycamore trees.

Our chance of rain has been pushed back to Thursday.  Thank you Mother Nature.  Now they will be able to finish up painting without me worrying about watching the paint dry. 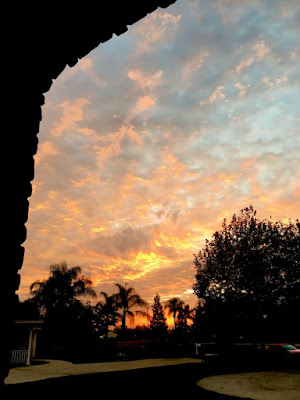 Here's the latest critter cam video.  This is Kitty Kitty.  I'm pretty sure he belongs to the neighbors, or at least I see him heading into their garage quite often.  I never realized cats were so nocturnal until I put up the camera.  They are out all night long, coming by often to check for morsels.  This guy got all the turkey I put out for the foxes.  He certainly got a belly full!
It's funny this guy does NOT eat dry cat food.  Neither do the skunks, raccoons, foxes, possums or any other critter I've had wandering around the yard.  Wading through 33 videos was like watching paint dry.
The first order of the day, after watching the Kitty Cam, was to retrieve this fabric from the mail box.  As you can imagine, it's pretty hard to find Halloween fabric during Christmas, so I ordered it online.   YIKES!!  $45 to finish up this one little wall hanging.  Then they sent a message saying it was no longer available.
RATS!!  A week later, I see it back on the web at the same store.  I ordered it again, figuring I would get another message, whereupon I would say "then WHY is it on your site again".  Lo and behold, they delivered it for HALF PRICE.  Add one more to the "needs quilting" pile. 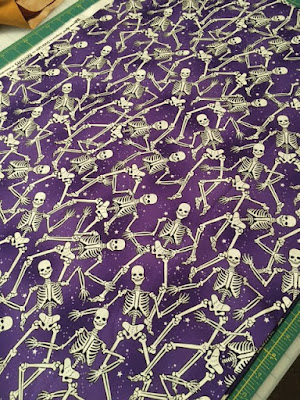 Next I had to brave the city crowds to pick up my new CD player.  I was amazed to find hardly anyone on the streets at 9:00 am on Saturday morning.  Did I miss the memo?  Was there an evacuation?  Literally NO ONE was in town.
I parked and sent a phone message that I was there.  In less then 5 minutes, out came a guy with a HUGE box.  Here's the kicker .... I was going to have it sent to my house, but it would arrive on a Bingo night.  I knew it would get stolen, so I opted to drive all the way into town to pick it up.  They charged me $1.25 MORE because I was picking it up.  WHAT THE HECK??  Shouldn't it be CHEAPER?
So I made it home, unboxed the thing ... which is gigantic ... and began to remove the old one from this stack.  See all those wires in the back?  It's a rat's nest of craziness due to the whole house movie-theater stereo system.  I had three things to unplug and plug back in.  How hard can that be?
Well first off, I choked from the two inch layer of dust and dirt covering everything.  I couldn't take anything out, I could only move it side to side about 3 inches.  I got nervous when the TV kept going off and on, praying I didn't unplug something and not know where or how to fix it.  It's the big thing in the middle with the green light.  Even the DVD player below is smaller.
Finally, with everything plugged in, I tentatively hit the power button.  Woohoo!!  The thing opened, I put in my favorite CD and it began to play.  EXCEPT ... everything is programmed into a remote that doesn't recognize this unit.  I can figure out any computer, but THIS .......
At long last LET THERE BE MUSIC!!!  Yay!!  I danced around the living room turning it up full blast.    Today I'll see if I can program the fancy dancey remote to include this frequency.  I don't think that's going to happen, so I'm writing up a post-it note so I can remember how to connect it to the speakers.  Hey, isn't this MAN'S WORK? 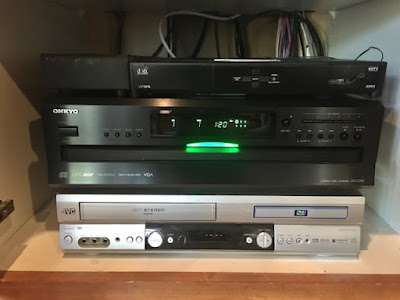 By the time I finished up with that, it was time for dinner.  I had some broccoli that had been lounging in the fridge WAY too long.  Weird, but my neighbor posted she was Thankful for broccoli cheddar soup.  That's a GREAT idea!  It's GOT to be better than the turkey soup that made me sick.
Super easy recipe ... butter, onions, a tad bit of flour, chicken broth and broccoli.  When cooked, add in cheese and whatever cow stuff you have in the fridge.  I used part cream and part 2% milk.  That makes it diet-y, yes??
Pretty tasty and I didn't get sick.  It's a win-win!!! 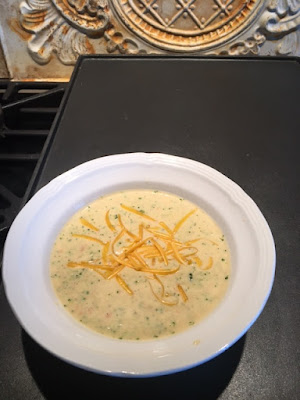 Cooper and I cuddled up on the couch as I finally finished up the binding on this quilt.  One more down and one more to go!!! 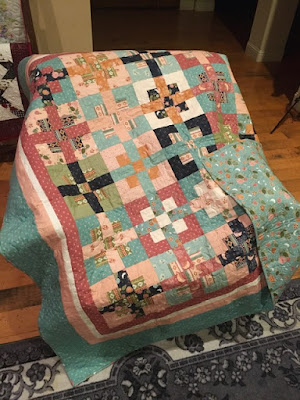 I did make one more short trip, but I'll relate that tomorrow.  Right now Cooper is giving me THE LOOK, because he hasn't received his morning snack.  I'll be dancing in the living room to my new CD player.  By the way, it has room for SIX cd's ... and I can only find TWO.  I guess I need to pick up a few more.