Trying To Figure It Out

Life's a jigsaw puzzle.  I'm guessing a 5,000 piece puzzle of teeny tiny pieces that never seem to fit together just right.  I'm always trying to figure out something.  Most times it's easy ... just sit on the patio and drink my coffee.  Just when I'm feeling good ... something like this happens.

This is the new paint job.  What in the world is THIS?  Actually, it's already happened once ... and they repainted it.  Something is bleeding through the paint and making white splotches.  It has to be something they put on because it never looked like this before.  Any ideas?  Any suggestions?

The only one to show up yesterday was the young kid who is painting the window frames.  Thank goodness he's doing a really great job.  I mentioned this and he said yes they knew about it, but were off on another job.  He also said the guy would stop by, which he did not.

So here we go again ... another problem jumping up and slapping me in the face.  This is costing me a small fortune and is NOT acceptable.  I need a drink!!! 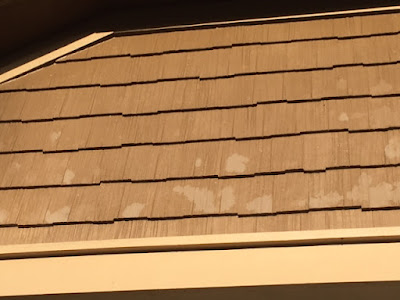 I worked on the puzzle for awhile and air fried some chicken for both Cooper and I.  That's when I found a short bit on air fryers.  Do NOT leave them plugged in at your house or RV (which I never do thank goodness) because for whatever reason, they are catching fire.  Back to the puzzle for a little more frustration, as Deb so astutely pointed out.
So hey!!!  Let's get even MORE frustrated by trying to fix the motion detector.  I watched several YouTube videos about how to remove them from the wall, all of different models, none of which were mine.
I finally called the alarm service, but it was 4:00.  I talked to a nice Tech guy who looked up the model numbers.  It didn't help me one bit.  Ten minutes later I called back AGAIN to find they had all gone home.  Nope, there's no one here to help you.  No techs?  No night team to repair stuff?  No ma'am ... no one is here.  That made me feel real safe.
I was finally able to push it up from the bottom with a screwdriver and it came off.  SUCCESS!!  It was short lived however.  I finally got the battery cover off and the battery out.  Of course it's a kind no one has in stock.  That's when the alarm system started beeping and beeping .... and beeping.
I won't tell you the words I said.  I called them back, where upon they had to look up my system again and tell me what buttons to push to bypass it to stop the beeping.  Her directions were wrong the first three tries.  At last I got it done, just as she noted I would have to do that every single day until I get a new battery in.  I had hit so many buttons, I have no idea how to do it again!! 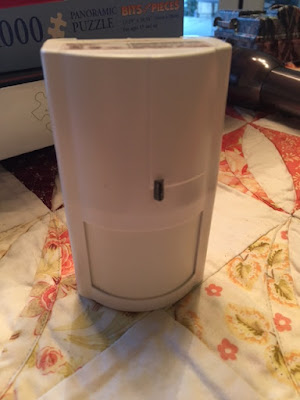 My frustration level now at an all time high for a single day, I sat on the couch and cuddled up with Cooper.  It worked.  Maybe a little hand sewing will help even more.  This is the last quilt to be finished up from the eight I started out with. 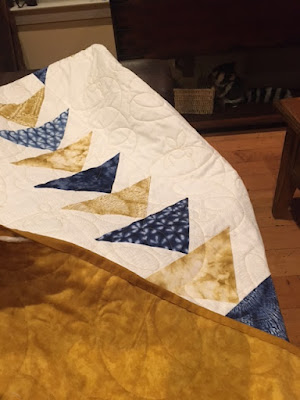 LOOKY HERE!!!  In between sewing, I worked on the puzzle until it was FINISHED!!  Can you believe it?  Yeah well, me either.  After knocking many pieces off the table every time I moved the quilt, I threw it all in a zip lok bag and stuck it back in the box.  Hopefully I got all the pieces off the floor.  What a relief knowing I don't have to look for pieces I cannot find!!  No trying to figure it out!!! 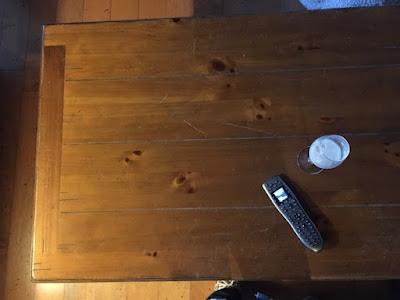 This morning, if I can get my act together, I'll be out scrounging the neighborhood for the lithium batteries I need for that motion detector.  Thank goodness the rest of the system works just fine without it.  More fun will ensue however, since as I look around, there are three DIFFERENT types of detectors, meaning three more frustrating adventures in removal to replace THOSE batteries.
The perfect start to a night of BINGO!!!!

Posted by Nancy Kissack at 5:52 AM