It's that time of year ... not only are we bombarded by crazy singing and dancing ads for J C Penneys and every big box store NOT in our town, but scammers are out in full force, sending dozens of emails every day to try and relieve you of your money.  Although I'm sure I can find all my Christmas presents in one of the six 99 Cent stores available here, it would be nice to have a REAL store to shop in ... and Walmart does NOT count.

As for the scammers, I can usually see them a mile away ... but when you are awaiting a package from Amazon or the Post Office, they can easily tease you into opening it just to see if it's the real thing.  DON'T DO IT!!  Instead, go to your actual account and see what it says.  Never EVER click on anything inside an email.  You will get burned for sure!  They are getting smarter and smarter, making their emails look more and more like the REAL thing.  Especially the ones that say Confirm Your Email or Confirm Your Account.

I put out this warning because one of my friends happens to work in a bank.  His client clicked on a link inside an email and had $20,000 removed from her bank account in a flash.  Luckily she contacted him quickly and he was able to restore her money and report the bad guys.  Just a warning to be careful ... it only takes ONE click.

Here's my sweet kid with that "I need a snack" look on his face.  He's become very adept at communication.  I wish he had learned that 13 years ago.  After all these years, if he needs to go out, he gets right up in my face and looks at me like this.  It's also the same look when he sits by the bar and growls, which means SNACK time.  He's pretty smart .. every time I sit down for lunch, he stands under the counter of goodies and growls for a snack too. 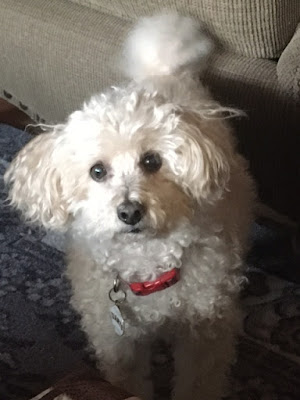 Luckily he doesn't mind sharing the food he refuses to eat with the foxes.  Sadly, there are no more fox videos.  You are probably happy about that!  Batteries don't last long in cold weather, and by the time I figured out what the problem was, the foxes had gone into sleep mode.
They don't hibernate exactly, but they do return to their dens and sleep for weeks at a time when the weather turns cold.  All I've been able to capture in the last week is Kitty Kitty.
That took all the excitement out of my day.  I'm now relegated to finishing up those last two quilts.  I probably could sew the binding on by machine, but it never turns out as nice as when I do it by hand.  Cooper thinks that's just fine since it means he can snuggle up next to Mom while she stabs herself in the fingers over and over yelling DARN IT!!!  Or something like that. 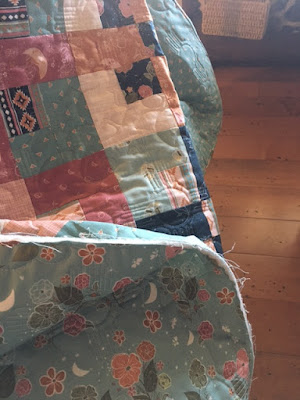 My new CD player from Best Buy should be in today.  It was there yesterday, but there was no way I was going out on Black Friday.  We used to have a huge store, but now it's basically the old Sears pickup window.  They don't keep much in stock, so you order everything, then go pick it up.
From now until Christmas, the grocery store is your safest best.  Believe it or not, in this small town, we've had three pedestrians killed very recently from crazy drivers not paying attention and another three from accidents.  One was a motorhome head on.  I can't believe how much damage that resulted in.  So PLEASE be careful while driving!  Be on the lookout at all times for those guys running stop lights.
By the end of the day, Cooper was exhausted from all that laying around sleeping. 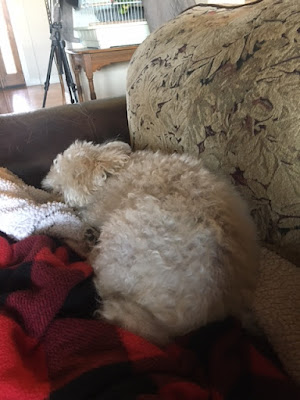 It's time to get my act together, dress up like a human and head out into the Christmas crowd.  Hey, it's better than sitting down and finishing up the Indio Rally agenda for January.  That's coming up much faster than I ever imagined.
Happy Saturday .......

Posted by Nancy Kissack at 5:31 AM