Just another dragging butt morning in sunny California because of way too many late nights.  Who would have thought I'd get old and be this tired?  I'm on such a different time schedule than everyone else around here, it causes havoc to be up late at night attending Elks Lodge meetings that go on and on .... and on.  Try as I might to sleep in, it never happens.

Here's my every morning view.  Yup, that ball is way back under my armoire.  The kid has struck again!  It takes a long arm and a coat hangar to get it out .... every single morning. 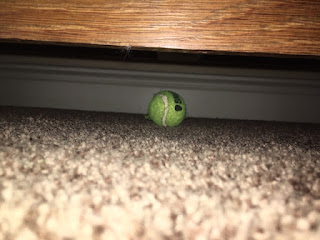 Since I had leftover stale bread in the freezer, I whipped up the French toast casserole the afternoon before and left it in the fridge.  It was pretty easy to stick in the oven and bake.  Pay no attention to the burned pecans on top.  That was my addition, and now I know why the recipe author did NOT include them ... because they will burn.  I picked them off ... most of them anyway. 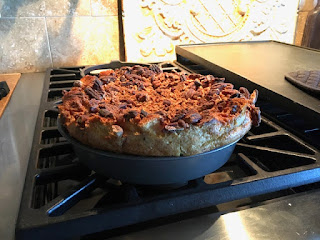 Once cooled down and smothered in syrup, it was delicious!!  The rest went in the freezer.  Yes, it really did, cut up into slices for that early morning sugar rush.  If sleep won't wake me up, maybe this will. 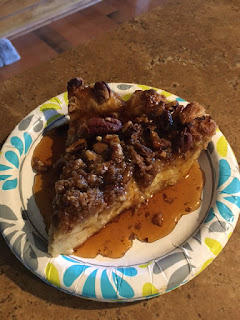 I finally got through the videos from the back yard.  It's been interesting to watch the "kids" pass through on their way to wherever.  There are big almond orchards in both directions, so I haven't determined which one is home.  Here's a good daytime image.  They must spend late nights out too, since they are coming home in the light of day.
This is what shocked me, and I've been trying to catch it ever since.  There's no hole in the fence to the left.  Just a 7' tall brick wall.  Laying next to it is a roll of wire which they scaled with ease.  I had no idea these guys could climb like that.
I set up the camera to capture their flight over the fence, but for some reason the camera isn't getting them. There is a one second delay (which I cannot change) before it actually turns on, meaning from this point to the fence, it takes them less than one second to disappear.  Just amazing!!
I tried to catch a few winks during the day between sewing another block and trying on every pair of Levis I have to see what still fits.  It was a futile pursuit.  Cooper ..... he got TWO HOURS of sleep!!! 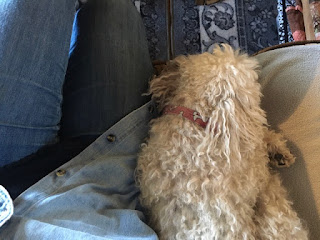 At 4:30 I headed out to the secret meeting.  Who knew there was a secret club?  I was flattered they included me in the Mexican dinner before the long meeting.  I really did need something to keep me awake.  We all got a good laugh when the gal serving didn't know what White Zin was.  She finally came back with a bottle, completely murdering the pronunciation.  She got a big tip for putting up with us.
Off to the lodge we went, where the meeting went on and on.  There's discussion, we decide on something, and then that one person just goes on and on and on!!!  Or wait .... they bring up something to chew on again AFTER we've already decided and VOTED!!  You know, your normal group meeting stuff!!
It's actually three meetings in one, and I was heading out the door after only two.  Oops, my mistake.  I got an extra large coke to keep me awake.  I can't tell you what all went on, but we seem to be on the right track.  Luckily we have two lawyers in our group, one accountant, one police officer and several business owners.  We are on a roll at the Elks Lodge!!!
Although I'm still looking for western shirts, this is how I seem to feel these days about shopping.  I did a quick drive by of our local mall and discovered over half the stores closed and abandoned.  It's a complete mess with trash and debris spread out over the entire parking lot.  What a shame. 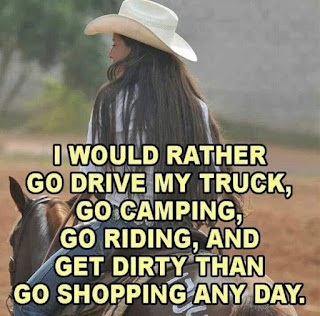 And so with nothing available locally, I'll be wearing those old holey shirts a while longer.  Of course if I'd lose 20 pounds, I would have lots of stuff to wear.  Wishful thinking.
I'm hoping for another restful day today, as I'm heading out to a town 60 miles away tomorrow for some RV group business.  Well what do you know ... a quilt store lives there!!