How I Became An Accountant

Sometimes your plans work out, sometimes not.  I thought maybe if I called it Labor Day, I could skip all the heat this summer is going to bring.  Just skip all the days of fans running 24-7 and slide right into the REAL Labor Day.  It almost worked, but you guys caught me!!

I left about noon, knowing traffic was going to be a bear.  Sure enough, it was a cross between a grizzly and a polar bear.  I drive like a bat out of hell ... but those guys on the freeway put me to shame.  I've never seen anything like it.  I came real close to creaming a guy who jumped over two lanes to end up on my bumper because I was already moving over.  He has no idea what that thing is on the steering column.  It's called a turn signal.

At any rate, I made it without screaming my head off or honking the horn for two minutes at some idiot.  Jamming in front of me at 75 mph without signaling when there isn't enough room, will land you on my HONKING list, not that it does any good. 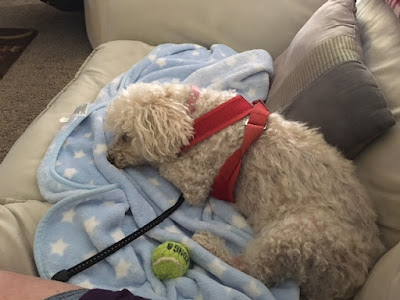 This is a pretty different trip for the two kids.  They don't quite know what to do, not being in THEIR house.  Cooper wouldn't settle down at all, in spite of the nice soft blanket Cyndae offered him.  Finally five hours later, he crashed.
So with nothing to really write about and no pictures, I'll just give you a quick answer to the question how did I become an accountant.
In high school, so many moons ago, girls were not allowed to wear pants of any kind.  We were forced to wear dresses every single day.  You can imagine how that went over with me, the Levi Queen.  That also meant girls were not allowed in FFA .. Future Farmers of America, the only classes that had anything to do with agriculture.
Girls had two choices ... home economics (cooking and sewing) or secretarial work.  Having been cooking since I was about ten years old, I passed on that and went into secretarial classes.  Typing and shorthand were the mainstays.
Literally the day I graduated high school, they changed the rules.  Women could wear pants, but still not take any ag classes.  Off I went to Junior College, hoping to become a veterinarian.  That's all I wanted ... was to work with animals.  That's when I found out they didn't allow women either.  I was stuck with math and secretarial duties.
Fast forward through many years of crazy adventures, I ended up in the construction industry putting my math skills to good use getting a company out of bankruptcy.  I married the owner, became a Licensed General Engineering Contractor (bet you never thought you'd hear that about me) and ended up divorced, taking my horses with me.
Earning a living and feeding those horses became pretty difficult, so I decided to go to the closest State University and get my degree in what I knew best at that point ... math and accounting.  I was 46 years old at the time.  I spent every minute studying and graduated with honors ... an accountant!!
Thankfully I got a great job at twice the pay with that degree and the greatest retirement ever.  And that's how I became an accountant.
Hopefully tomorrow I'll have more to write about.  Happy Memorial Day!!!
Posted by Nancy Kissack at 5:10 AM