I'm awake, but barely.  There's nothing like a stressful night at the first initiation of the year, dressed in a  tuxedo.  I admit, I cheated.

Here's how it went.  Men ... you can plug your ears.  Nothing holds you together better than a pair of support pantyhose.  Too tight levis or slacks slide over them quite nicely.  I ordered two pair over two weeks ago.  As usual with the post office, they did not arrive.  Last I heard they were in Kentucky.

Thus I spent almost an hour trying to get into that pair I found in my closet that were three sizes too small.  I struggled hardily trying to get all THAT into those teeny tiny nylons left over from my days of working and running marathons, meaning I was MANY pounds lighter.  By the time I left for the Lodge, I was exhausted.  Think overstuffed sausage ... but the pants fit perfectly!!

I slipped on the chosen pair of black shoes which seem to have shrunk since my working days.  Like the levis, I have 20 pair of heels residing in my closet.  The next problem raised its ugly head.  I have heard in the past that open-toed shoes are not allowed.  I have two pair to choose from.  Small and smaller. 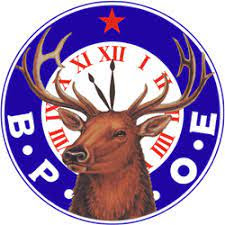 I tippy toed through my house on the hardwood floors, slipping here and there.  This is NOT good.  Driving the truck was almost uneventful, except for when my heel got stuck in the floor mat.
Once there with the rest of my outfit in tow, we did a quick run-through before heading downstairs to a packed house for dinner.  It was Biker Night as well as having the initiation of 34 people along with their sponsors, spouses and friends.  I think they prepared 150 steaks.  Let me tell you, THESE guys know how to cook a perfect rare steak.
There is a perk to being an officer ... you get to go to the front of the line since you are required to eat and run ... to the meeting upstairs.  Well first, I had to get into the rest of the tux.  It took me literally ten minutes to get the buttons buttoned on that shirt and two feet of shirttail tucked in.  I'm saying my lines over and over in my head the entire time.
The Lodge hardwood floors are even more slippery than mine.  I literally stayed on my toes and held on to the wall when opening and closing the door to allow the new folks in.

I got a couple words wrong, but no one noticed.  It's so hard to think when there are 60 people staring at you.  That's when it happened.  We are required to stand for quite some time.  Even longer when they forget to rap you down with a bang of the gavel.

The cramp started out small, a little annoyance creeping up the outside of my left leg.  Trying not to fidget I did everything I could to stop it.  In a flash it turned in to a full blown Charlie horse.  I couldn't decide whether to scream out in pain or remove my shoes.

To add insult to injury, NO ONE ELSE had the required closed-toe heels on but me.  Somehow I didn't get the memo.  There will be a new pair of shoes in my house shortly.  That of course means I have to re-hem those pants.  Big sigh!!

So here it is, the only tux picture you will probably see of me.  He cut my legs off because I don't have any shoes on. 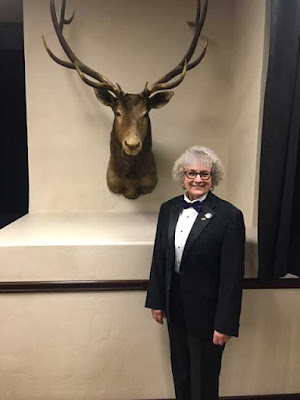 I got home at 11:00 and fell exhausted onto the couch where apparently I stayed for several hours.  This morning I'm limping a tad, but hopefully a little stretching will take care of that.  I survived the first big tuxedo night.
In the meantime, after FOUR Advil, I'll be checking on the skunk trap.