My stories that end in success are usually few and far between.  When they happen, I dance around the house woohoo-ing to the puppies who look at me like I'm the crazy lady, then completely ignore me.  Such was the case with the chicken, and now with my handyman skills.

I decided to do the baking first.  That usually comes out reasonably tasty since I'm using my tried and true recipe for Hawaiian banana bread.  It was a little iffy when I discovered the only crushed pineapple I had was a huge can of the off-brand variety.

I used half, which even at that was too much, and hoped for the best.  BEST BATCH YET!!  This came out so moist and delicious .... Jonathan the parrot will love it.  Of course I end up eating the majority, but my excuse is "it's for the bird". 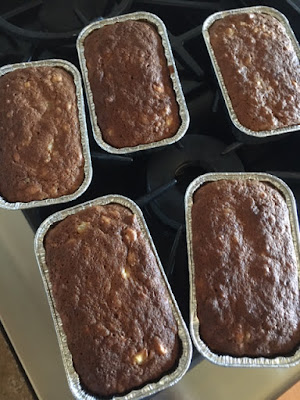 While making myself presentable for the UPS driver ... who cares, right? ... well that would be me!  Anyway, while looking in the mirror, I happened to notice it was hanging a little crooked.  Upon further inspection one side looked like it was loose from the wall.
After trying to tighten it up, I realized the screws holding the bracket on one side were coming completely out of the wall.  Oh my gosh!  This is a very heavy mirror.  I crawled up on the counter to get a good hold of it before removing the screws, but of course I had the wrong screwdriver.  Three trips later I finally got it down.
You know those little gizzies that you punch in the wall, then put the screw in?  It was broken in half, so the only thing holding it up was a little sheetrock.  It's a good thing this didn't fall on the counter and shatter!!  Luckily I found another slightly larger thingie ... okay, it was HUGE ... that I had to hammer in place.  It's not going anywhere NOW!!!
It took quite a bit of wrangling, but I got the mirror back in place and screwed down tight.  Wow ... another success story in the same day!! 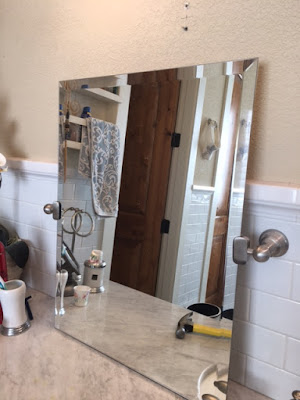 The failure of the day came with the critter cam.  After searching on line, this brand (my first cheapie one) apparently has a defect that eventually causes it to run constantly, which is why I'm getting 798-1200 videos every morning.  I reprogrammed the thing, changed all the settings and tried again.
No luck.  If I don't want to spend hours every day looking at nothing, a new critter cam will be required.  I'm giving it one more shot today.
The next success story came about because I required water in the fifth wheel toilet to keep the seals in good shape.  You guys definitely know what I'm talking about.  I grabbed my coffee cup from inside, filled it with water and dumped it in.  It's PINK!!!  OH NO!!!  They told me they drained and cleaned the fresh water tank.  I tried it again, just to make sure.
Well that was a disgusting thought!!  Here I used it for three days.  No, I never drink the water, I'm a bottled water girl.  But I did brush my teeth with it.  YUCK!!!
And so the sanitization procedure began.  Here's how it works on this rig.  You move all the little switches according to the pictures, then mix up 1/4 cup of bleach per 15 gallons.  So a cup of bleach went into my 5 gallon bucket which I filled with water.  Hook up a hose like this and hit the pump button.  It actually sucks the bleach water into the tank and I didn't ruin my Levis by spilling any! 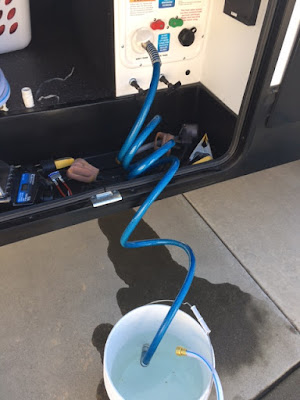 Then you hook up the water supply, switch the little button things around again and fill the tank.  Easy peasy.  There was also something about opening the faucets to let air out of the tank as it filled.  I left it for three hours before crawling under and behind the tires to pull the dump valve.  That sure was in a difficult to reach position!! 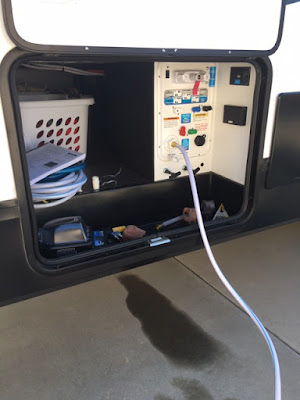 That of course flooded the entire driveway.  In a flash I noticed a tsunami of ants coming up out of the cracks.  NOOOOO ... they immediately headed up the electrical connection to the rig.  In a nanosecond there were billions I tell you!!  I made a run for the Home Defense spray which gave them a knock-out punch.  If there are any left today, I'll be dropping Amdro down into their little holes. 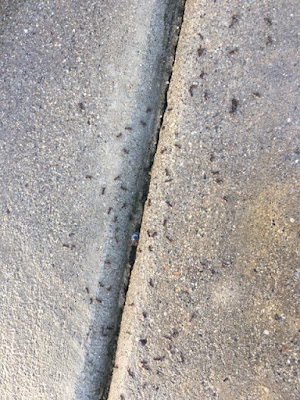 By the way ... ANOTHER success story ... I think I finally won the war with the big red fire ants.  The last three days I've checked, I have not seen a single critter walking about.  I'm still not counting my chickens however ... I'm sure they will be back!!