SO much stuff to learn about the new Grand Design fifth wheel.  I started out by reading the owner's manual page by page.  I got to about 50 when I gave up.  It's all sort of familiar, but so confusing!!  On my Class A everything was so much easier.  Want to know how much propane you have left?  Push a button.  Want to know where your grey tank is at?  Push a button.

The propane would last me well over a year, even though I kept the heater set on 45 degrees to keep things from freezing up.  This rig is completely different.  I have tank heaters ... something like heating pads for the grey and black tanks, except I have THREE tanks.  So are they all heated?  I was warned not to turn those on unless the tanks were half full to keep from melting the sides.  WHAT????

For those last chilly nights in Tucson, I kept the heat on low, hoping the water lines would not freeze.  How much propane did I use?  I've no idea.  Here's one of two tanks, one on each side of the rig, basically under the bed so if something goes wrong I will die.  The detector is of course in the farthest back corner by the license plate. 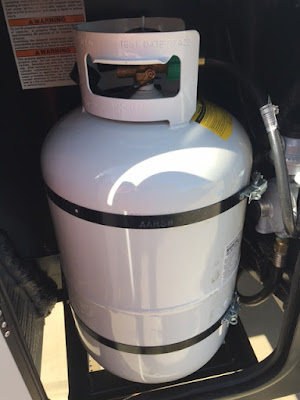 I kept reading everything I could find on the internet hoping to come up with a few answers.  Oh ... there's a valve you turn that points to the tank that is currently in use.  Might it be this red one?  That would be a NO. 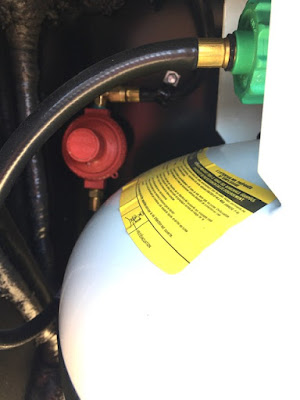 Finally I discovered something called Mopeka.  It's a little flat gizzy that magnetically attaches to the bottom of the tank.  Download the app on your phone and VOILA!!  It shows how much is in your tank.  I ordered one ... guess I should have ordered TWO.  Now if I can only figure out WHICH tank is being used.

I was guessing it was not THIS one because I did use propane in Tucson.  I had a fleeting thought about expansion of the gas, but honestly, no clue!! 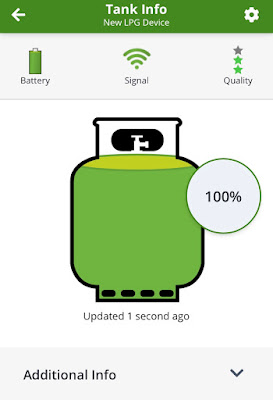 I went around to the OTHER side and checked out THAT tank.  EUREKA!!!  I see a big black valve pointing to the passenger side, so that must be the one it's using.  At long last I discovered THIS valve, hidden behind the hoses.  With my great powers of deduction, I decided the red meant it was empty.
No wait .... when I left Bakersfield, I turned both tanks OFF.  Maybe, just MAYBE .... so I turned the valve on and the red turned to green!  BOOM!!! ... we're in business baby!!  So now my question would be ...... is this for the tank on THIS side or the one on the OTHER side???
The valve is pointing to the OTHER side, but I turned on the gas on THIS side to get it to turn green.  It's all too much for my pea brain. 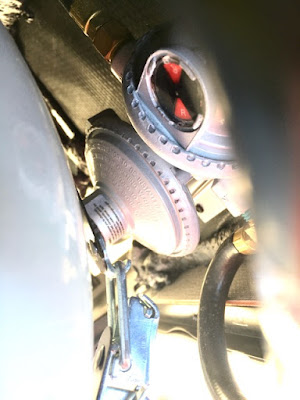 Truth be told, I didn't figure ANY of this out by myself.  I'm sure you already knew that.  Luckily I again was able to talk to expert fifth wheeler Bill Richards who explained everything about the little valve with the red thingies.  That's MY technical term for it.  It would probably behoove me to spend a couple nights in the rig while parked in my back yard to get used to things.
In the meantime, not that I see any problems, but I'm going to set up my game camera and see what floats. The ants are still fighting me tooth and nail, coming up with new ramparts every morning.  It's time for a Home Depot run since I'm now out of ammo.
AND tonight is one last practice at the Elks lodge for the first big initiation of new members next week.  That's where I have to wear the fancy tux and remember my lines!!  I'm getting nervous.
Posted by Nancy Kissack at 6:07 AM