Adversary:  An opponent in a conflict or dispute.  Just when I thought it was over, the saga of the skunks continues and I've become one with the stinkers.  Pun intended.

SO -- it was nice of reader Linda to point out my tuxedo MORE than meets skunk criteria for a look alike. My morning coffee when spewing out when I read that one!!!  How right she is!! 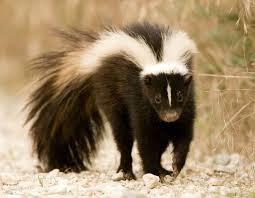 I couldn't be more frustrated!  Having checked my camera, I discovered there are now not ONE but TWO nasty little creatures roaming my yard at night.  Oh so surprising, the first one came in around 9:00 pm.  That's pretty brazen in my book!!  But alas, these just don't have the weight to trip the trap.  This one got some ham and cat food.

The SECOND one came in flashing his tail at the camera, a nose thumbing gesture for sure!!!  I thought I had won the third skirmish as he walked all the way to the back of the cage to grab the rib bones.  Nope ... the trap didn't spring.
I'll have to dismantle all the covering and wash the bottom to get all the sand out of the springs.  In the meantime, I've lost my skunk dumping grounds to a big fire, so I'm on the hunt for a new location.  You would think it's easy, but the skunks absolutely refuse to leave the trap during daylight, even with the gate wide open.  Trying to dump them out will only result in being sprayed, an activity I'm trying desperately to miss out on.  I have to find a spot to leave the trap where it won't get picked up by anyone.
There are now TWO holes going back through the fence.  In less than five seconds, this one dug a hole back under instead of using the FIRST hole.  My elation at getting rid of the last two interlopers fizzled like a pinhole in a balloon.
In other news, I sat around all day waiting for the fence contractor to show up, although I was happy to after that harrowing night of high heels.  Having called my good friend Matt, he gave me the name of a kid he's been mentoring in construction.  Turns out Josh had just finished two big fences in the neighborhood that I had admired.  Might as well cook something!!
Although this is not actually my favorite, that hunk of cauliflower was going to end up in the trash if I didn't cook it this week.  I added some sweet apple to the pot, along with fresh rosemary from my garden. 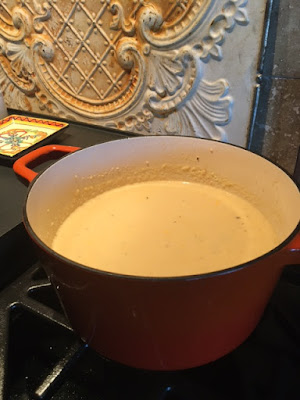 When it came time to buzz it up after cooking, I grabbed my handy dandy blender.  I don't know who invented this thing, but it works really well if it's in the right hands.  If not, it sucks itself down to the bottom of the pot and blends nothing!!  Even on the lowest setting, that's what it did with me.
As I lifted it up oh so carefully, that downward suction broke, causing the blender to come straight up out of the liquid and splatter soup all over the entire stove, backsplash, countertop and ME!!  What a mess to clean up THAT was!!!
At last I stirred in a cup of cheddar cheese.  Wow ... it was mighty tasty, even worth all the cleanup I had to do. 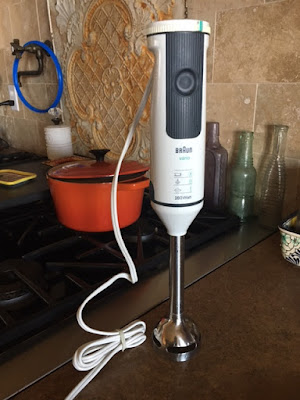 The contractor finally showed up, but I'll tell you about that shocker tomorrow!  If you own a house, sooner or later you are going to have big ticket maintenance items!!
Posted by Nancy Kissack at 6:01 AM