Just When You Thought It Was SAFE!

I don't know exactly why I thought to wander the property line.  I mean there aren't any critters in the neighborhood to worry about, right?  WRONG!!  I'm close enough to acres of farmland that all kinds of things have tried to make my horse corral their home.  I've lived here going on 13 years and have NEVER seen anything like this!!
Sure enough, there were poop piles and big holes dug in the dirt.  I could even see their trails as they wandered through the tall grass.  It's disheartening to know you have an adversary you can't even see.
So just for giggles, I set up the trap with a little cat food and my game camera, expecting to find nothing. 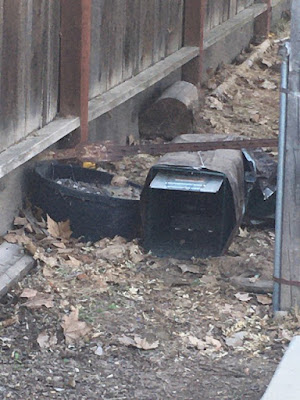 I hit pay dirt right off the bat!!  (BIG SIGH)  Guess who came to dinner!!  It seems however that THIS guy is much more careful and vigilant.  See him (or her) smelling the drop-down gate?  I forgot to use gloves.  That human smell was enough to send him packing before he even tasted the first course.

And so THIS battle continues.  I walked the fence line and found two boards that were loose at the bottom, allowing a trap-door effect right into my back yard.  I can't really nail them down since that's the fence that fell over and has yet to be repaired.  Instead, I propped sticks tight up against them to keep the skunks out.

I was admiring my roses when friend Cyndae showed up.  I explained my black and white problem in considerable detail.  So ..... do you think we should remove the stick and ply the interloper with fresh eggs in the hopes of catching him?

The problem there is getting rid of it.  My relocation spot has been removed from the picture.  We would have to haul it off in the middle of the night to some far ranch property and hope it leaves the cage.  You see they refuse to leave the cage if it's light outside.  GO FOR IT she said. 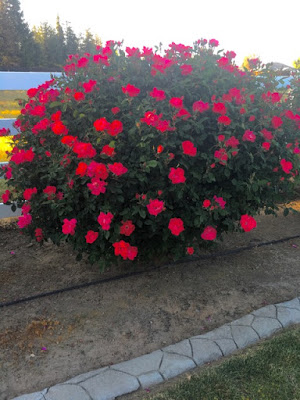 With great anticipation, I checked the trap this morning.  Nothing ... nada.  No black and white visitor.  This one IS the sharpest knife in the box.  I'll give it one more night, then I'm closing up the hole in the fence.
In the meantime, just because it's daytime doesn't mean the back yard is safe.  You will have to click on this picture to enlarge it in order to see the problem.  Just as I was checking for new holes, I looked up in time to see the biggest swarm of bees EVER!  They covered half the corral.  As I watched from a safe distance, they gathered in this tree.  Twenty minutes later I couldn't see any of them.
I thought to get a little closer so I could get a picture of the swarm, but I cannot see exactly where they are and I really didn't want any encounters.  When I was maybe seven years old, a bee flew through the bus window and stung me right between the eyes.
Lucky for me the nice bus driver grabbed the stinger to pull it out, squeezing the rest of the venom into my face.  I couldn't see for four days.  Now I have a pretty healthy respect for things that fly and sting. 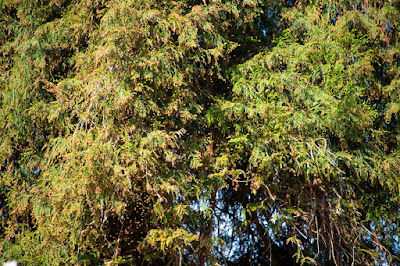 I've no idea what's on the menu for today, but I'm not going near that tree.  I'm now deciding whether or not I want to share a nice fat chicken egg with my skunky buddy.  As for the fire ants, they are slowly disappearing, hole by hole, ant by ant.
At least I'm winning a battle here and there.