Guess Who Came To Dinner!!

Feels like 33 ..... and it IS.  What ever happened to the lovely Arizona weather we have grown accustomed to?  The low this morning is supposed to be 31, which might have led to the nighttime happenings on my patio.   You just never know what you will find when you wake up at 4:30.

As you can imagine, all of these guys are welcome at my house any time.   Luckily I spotted these two as I was heading to the back yard.  She's looking at me as I try to stealthily sneak past the glass door to grab my camera.  They were certainly drinking their fill. 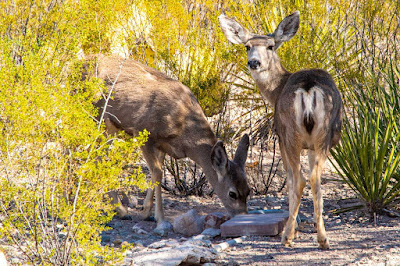 The third one wandered up to the second smaller water station and drained it dry.  All of these girls were in great shape and looking their Sunday best. 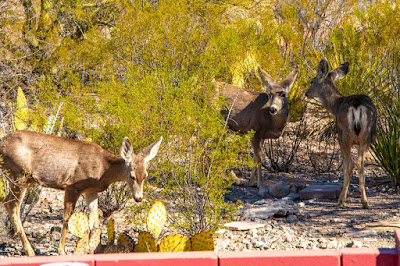 Suddenly a FOURTH came up to the fence and hopped over into my yard.  Well that's a first for me!!  She made a beeline for my rose bushes.  One bush has died, I imagine from lack of sustenance and too much cold.  I had just fertilized them a month ago and they were finally growing beautiful little leaves instead of dead branches.

She picked off every little morsel.  Yes I could have scared them away, but you know I would rather have the deer than the rose bushes.  I let her browse. 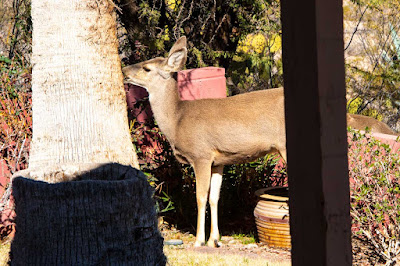 That's when I spotted another little head reaching over the wall on the left.  Pretty soon THREE of them were chowing down. 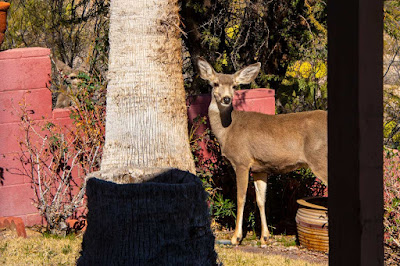 So much for my rose bushes!!  I suppose they needed to be pruned anyway!! 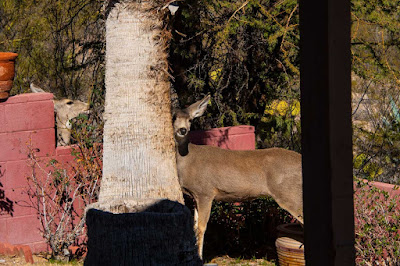 Suddenly she turned and jumped back over the fence.  Although they did take a gander at the other plants in the yard, the roses were the only suitable snack. 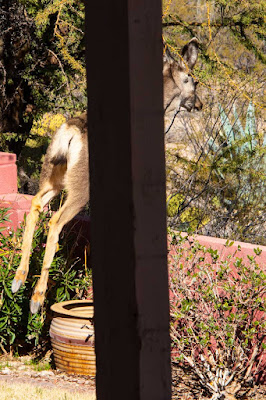 Once outside the fence, they all crowded around the far wall to gather the last few bits of leaves.  Apparently those taste better than the palo verde trees.  They hung around for about an hour before wandering off down the hill.  They made my day. 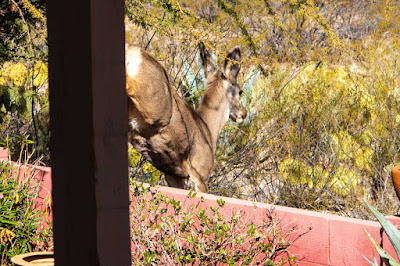 Yes I did take half the brisket to the Chance house, even though it turned out half the size of the original piece.  Dan's declaration that it was pretty tasty was a nice compliment for my first try.  Next time I'll grab the WHOLE brisket and set it up for an all-nighter.  Maybe I should try a smaller one again, since those big boys can cost over 50 buckaroos.  I'd hate to ruin all those dollars.  Weird, right?  The worst cuts of meat are now the most expensive?
So this morning, bright and early, I opened the door for the puppies and discovered THIS mess, right on my patio up against the house.  This would be an uninvited guest, and I would have given anything to see exactly WHO it was.
After some investigation, I think SOMEONE (could be coyote or more likely bobcat) caught a dove on the lawn.  I've never imagined ANYTHING coming into the yard except snakes and I had been told, deer.  Once it was caught, they carried it right up next to the house underneath a table two feet from my back door and chowed down.  Poor dove.
There was nothing left but two big piles of feathers.  In the interest of your breakfast, I didn't take a picture of the bad parts.  It's fascinating what goes on when you are asleep at night.  Nice of him/her to leave me this big mess to clean up before the puppies suck feathers up their noses. 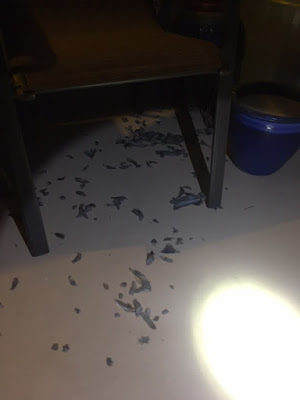 This morning I'm off to LazyDays to hopefully have them check my electrical hookup for the trailer.  I'm getting both excited and nervous at the same time.  It's going to be a long week!!
Posted by Nancy Kissack at 4:41 AM