Just when I'm about to leave a location, I start thinking about all the stuff I want to do to fix things up.  That of course lends itself to rushed applications and impulse buying, helped along by watching HGTV design shows because there's nothing else on the tube.

I wandered off deep in the heart to Hobby Lobby, with a thought of doing another Chicken Wars taste test along the way.  Meet Wendy's chicken sandwich.  This time I stayed away from the "spicy" version, which was probably a mistake.

It appeared to be a perfectly round piece of chicken, which harkens to pressed chicken.  The tomato was good, the lettuce wilted and the crust not the least bit crispy.  Still, compared to Popeye's at a 10, I would give this a 7-1/2.  The spicy might have had more flavor. 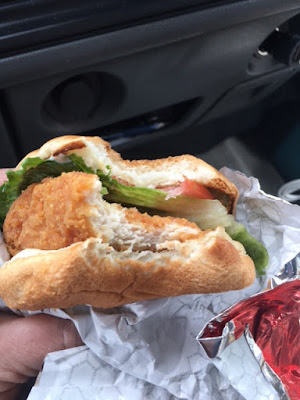 Their bun wasn't all that tasty ... it wasn't grilled ... but they gave me enough fries to make up for it.  Too bad they desperately needed salt and another five minutes in the fryer. 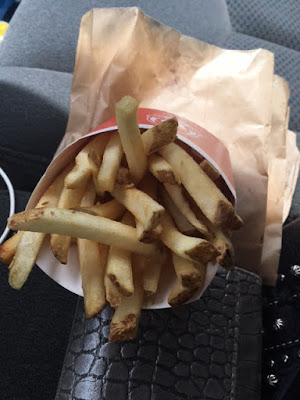 However ..... their Sprite actually tastes like Sprite instead of some watered down chemical thing.  Top that with a 2 for 1 chocolate chunk cookie and I completely forgot about the fries.  Sadly, when I got home to eat the SECOND one, instead of chocolate, it was a tasteless sugar cookie.  They got an F on getting the order right. 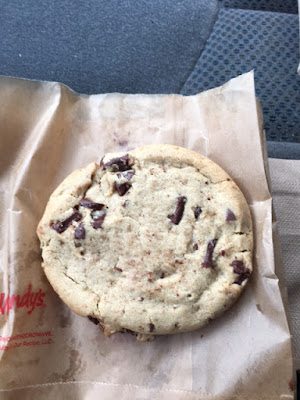 After watching more shows of one to two hundred thousand (that's $100,000.00 to $200,000.00) remodels  which were never going to happen in MY house, I hammered twelve nails into the wall to hang my newest purchases in the bedroom, three of which I already had.
It was made difficult by the sloping ceiling so I couldn't really hang anything straight.  Thus the extra nine holes in the wall.  It's okay, they are small and no one will notice.  That's my favorite Gila Woodpecker. 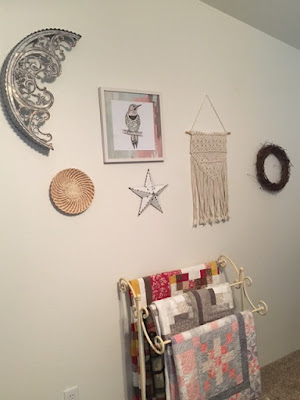 Just for the heck of it I checked the front porch for Jon's new cage, which wasn't supposed to arrive until today.  YAHOO!!  There stood a big box.  Now THIS is a CAGE!!  Made like they used to in the old days when I raised exotic parrots.  Yes, just another pastime in my past.
Once I made sure it fit, I began the coverings with towels, rugs and blankets to hold in the heat.  Jonathan is particularly susceptible to cold due to his past illnesses.  The feed cups weren't near large enough, so I took those out and began to install ones from his other cage. 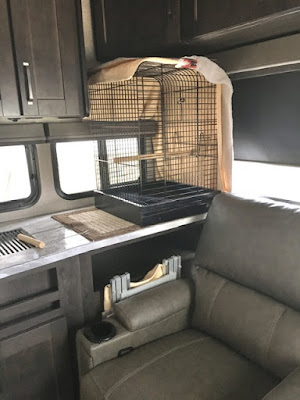 Naturally I dropped the old cups on the floor behind the chair.  I was lucky enough to reach those.  I was NOT so lucky when I dropped that wing nut.  Even with my longest pair of tongs, I couldn't reach it without opening the chair.
I stuck my hand behind the back and leaned in to grab the nut when the chair slipped down the entire way, grabbing my arm and pinning me to the wall.  OUCH!!!  MY WING IS CRUSHED!!  I'm not kidding, that hurt!!  The worst part, I'm kneeling on the chair and there's no way I could get it back into the upright position and release my arm!!   At least I had the nut in the clutches of my tongs, but I couldn't retrieve my arm. 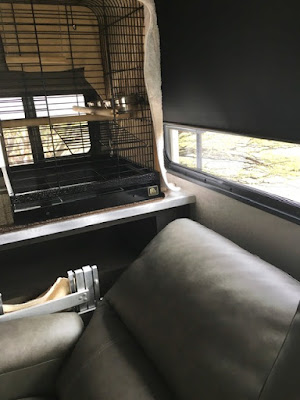 At last I was able to move one foot to the floor and push, relieving it's grip.  I was super careful the rest of the time to be sure I didn't drop anything ELSE behind the chair.  It took two hours to install the feed bowls, add another perch and the worst part .... try to attach the swing to the roof of the cage.
I couldn't get my two big arms through the cage door to hold the heavy wire tight enough to crimp the ends.  I should have just thrown the swing away, because to add insult to injury, I now have a huge hole punched into the palm of my hand.
I finally put the cage on the floor and came inside.  I would like to find a way to bungee it to the counter, but I'm too beat up to think about it.  BECAUSE I've looked at the weather predictions and now am freaking out about the WIND that is going to be dogging me my entire trip back to California.
At what point do YOU keep driving or stop ..... 20-25mph wind?  If it gets to 30, I'll be parked on the side of the road somewhere.  Trouble is, the only time it appears to lessen is at midnight.  Oh Boy!!  Driving in the dark!!!

Posted by Nancy Kissack at 5:31 AM