I imagine you all know what happened from the title.  It was NOT my turn to cheer.  I was not able to bring my new baby home.  Here's how it went.

I was a nervous wreck all morning.  I had written down dozens of notes because up to this point I had not one piece of paper saying what it will cost and what I'm actually getting after several phone call negotiations.

I tried to stay busy concentrating on where Jonathan was going to ride ... in the trailer or in the truck.  He kept me occupied for a few minutes by attacking and chewing on his stick.  Rather hard to see, but he's holding it with his right foot claws while biting it's head off with his beak. 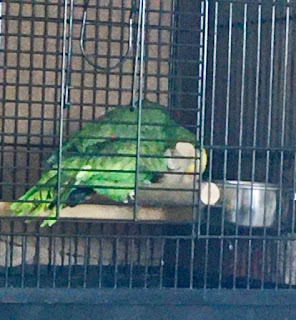 Parrots have very strong beaks and can take your finger off if they've a mind.  He will chew up this piece of dowel the size of the one he's standing on in about three days.  It's what keeps his beak short and strong so he can eat. 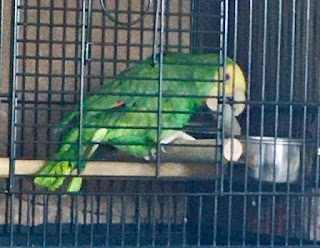 My first stop of the day was at PetCo for a small transport cage.  So far stuffing him in a dark cardboard box has not been his favorite mode of moving from the house to his cage in the motorhome.
Since the 5th wheel will be much rougher riding, he can ride in this small cage up front on the driver's seat.  This way I can see when he gets stressed and stop for a break.  Don't tell him it's a ferret cage or I'll never hear the end of it.  It's the only suitable size I could find. 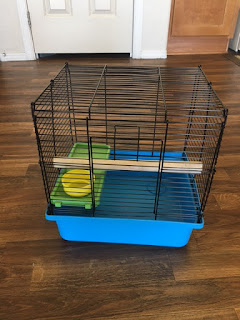 At long last it was time to head out for pick up of our new roving house.  They drove me to the back lot where it was plugged in with absolutely everything turned on that HAD an ON switch.  I backed right up, they moved the hitch up and slam bang, I was in business.  Oops ... I forgot to give them the disc to put on first.
All this time I'm thinking I have no paperwork.  Rather distracting that thought was.  In a flash, they were all gone as I waited for the guy who was going to give me the once over.
I unhooked ... a confidence builder ... put the disc on, then hooked up again.  Okay, I got this!!  In no time the guy showed up and went through the list of instructions like lightning.  It's a good thing I already know a lot from the motorhome.
Two things I noticed however.  One, the back jacks when UP are still VERY close to the ground .... like 8" at the most, and I'm thinking more like 6.  That scares me if I'm going over a deep gutter or a rough road.  I guess time will tell.  The second, not really a big deal, but the fresh water tank dump valve is WAY underneath ... a long reach at best.
Okay, three things.  I also now have a water heater to deal with.  When the time comes to drain it, I'll be asking for directions!!
We were almost done when I looked for the plug that will be going to my satellite dish.  I couldn't figure out how to hook it up.  He didn't know either, meaning I would have to bring the receiver and the rig back for someone to make the connection.
Things went downhill from there.  Uh oh ... the spare tire is missing.  I checked the tire dates and they were all manufactured after 9/20.  By the way, did they put the spray coating on the outside?  No one knew.  They did at least get the second battery installed.  Gosh ... the rear view camera seems to be missing also.  That's a $700 freebie to me that I certainly wasn't going to leave behind.  New sewer hose?  Nope. 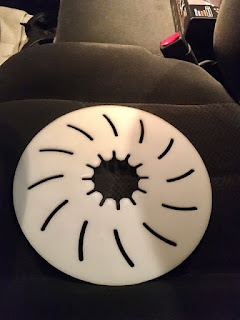 Time to pay the piper as they rushed me off to the office.  This is exactly why I didn't want to do this late on a Saturday when everyone wanted to run home.  As I mentioned, all this time I had no paperwork.  The gal had me sign something about a warranty, but gave me nothing in return.
Everything came to a screeching halt when they asked me for my insurance binder.  I didn't have one.  I'm sorry they weren't happy about that, but apparently SOMEONE should have given me the bank information along with all my paperwork so I could get insurance.
I did think about it and I emailed my broker.  She said just give her a call and she will write it immediately.  She doesn't answer the phone on Saturdays, meaning there's no insurance and no 5th wheel and I STILL don't know the actual final cost (although I have a good idea because you know, I'm an accountant).  Someone not only dropped the ball, but threw it completely out of the game.
I unhooked once again and dejectedly drove home.  I'm hoping they get their act together by Monday and I'll have some kind of paperwork in hand.  At this point all I have is a one year membership to Thousand Trails.  Oh BOY!!  You know how much I love them since everyone and their brother now has a membership with the purchase of THEIR RV to a company that provides no service and fewer than ever places to park ... but hey, it's FREE!!
My last thought for the day was:    Boy do I like that automatic leveling system!!!  And my two theatre seating chairs both warm up and vibrate!  WOOHOO!!
Posted by Nancy Kissack at 5:07 AM