Do they make Voodoo Dolls for the weather?  Asking for a friend.

I found this cactus on the web a few days ago.  Is this not magnificent and a shocking discovery?  Anyone know what it is?  I've never seen anything like it, but would love to have one in my Arizona yard.  This one is definitely a happy camper!! 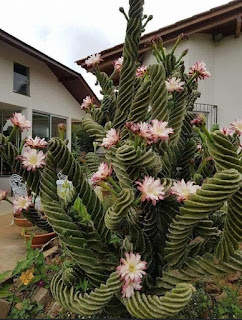 Next on my list of shocking discoveries ... I was hoping to find someone to make a pair of glasses in less than a week.  It would be helpful to be able to see that eye chart when I get my new driver's license July 1st.   My oldest provider has never accomplished that task in less than six weeks.  I kid you not.  No worries however, I've memorized the entire eye chart!

THIS time I took the advice of my NEW doc and hit up a new store.  I couldn't believe my ears when she said they would take my old frames and make a new pair overnight.  Where have you been all my life?  My vision insurance provider said they weren't even on the list, but they will even BILL the company for me.

Sure enough, she called last night to say they were ready.  I'm in shock.  How can they make lenses overnight and the other company takes six weeks?  I've got my fingers crossed I will actually be able to SEE with them.  I know they have this kind of service in Mexico, but I've never tried it.  Now I don't have to!!

Since they are right down the street from the grocery store I never step foot in, I thought I would pick up a few things on my way home.  I started off with no mask, but rather the thinnest scarf I could find to wrap around my face.  Within seconds I was ripping it off to breathe.  There is a second story behind that, but it will have to wait for another time.  Let it be known that the mask requirement has come on the heels of our Governor buying millions of masks from China and selling them to retailers, not to mention that his wife's family lives in Napa and Sonoma counties, both of which were first to OPEN.

So obviously, this is Raleys.  There were quite a few non-mask individuals coming out, so at least the police were not standing there ready to arrest me for non-wearing, or more like half wearing.  I stayed far away from everyone, mostly because I was the only one following the directional signs on the floor.

As I cruised around, I was on the hunt for chicken or turkey ... in other words, dog food.  Yes, my pups are spoiled, but I'd rather give them really good food than deal with the consequences of their stomachs from actual DOG food.

I almost passed out when I saw this, and it wasn't from lack of air through my cheesy mask.  I realize it's organic, but seriously?  This is three times my budget limit for chicken. 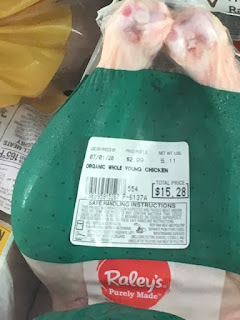 One thing I do like about this store ... they have put everything behind glass doors, just like the ice cream.  I have to note here that a million people have touched those door handles, not to mention every tomato and avocado on the shelf.  I'm not sure wearing a mask helps much when you are bringing home all those "hand" germs.

Anyway, not trying to scare you or anything.  If I want to check out three avocados, I actually grab one of their bags and use it like a glove.  Grab something, turn it inside out and there you go!  Truth is, it only keeps MY germs off the avocados, not everyone elses.

So, not quite as shocking, they did have beautiful fresh salmon.  I grabbed a package, dinging my wallet $24.  I got six pieces out of it as I packaged it up and stuck it in the freezer.  This one is for me, NOT the pups. 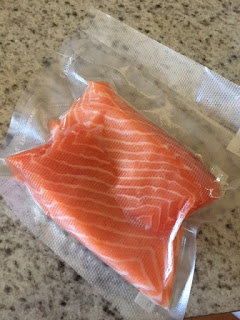 Once home, I went into a baking frenzy.  With six bananas ready for the trash can, I whipped up ten loaves of banana bread, a favorite of Mr. Jonathan the yellow-head parrot. 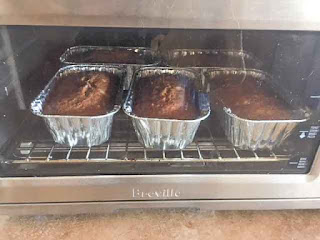 This should last him about three years, assuming of course that I don't snag a loaf or two along the way.  This is the Hawaiian version with crushed pineapple and pecans. 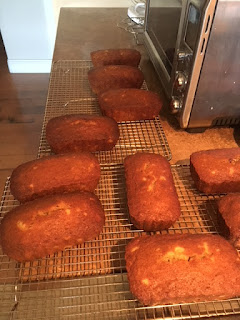 The next three days it's going to be 103 around here.  I'm feeling pretty good about that since 108 is scheduled for Quartzsite.  Oh how I was hoping the heat would hold off until after I headed that direction. I'm making a doll out of sunny yellow material to represent the sun, and have 300 pins ready.   In the meantime, I've got some RV maintenance to complete before it gets hot.