Now I know why I never purchased baby back ribs at Costco.  Good grief Charlie Brown, these things are HUGE!!  The $43 price tag took my breath away!!  My food bill has been running around $450 a month and there is just little old me!!  It might be cheaper for me to go back on the Nutrisystem diet!!

Knowing there was no way I was going to eat all these, I decided to package them separately.  That never would have dawned on me except as I was scrounging for sprinkler parts and pieces, I discovered my FoodSaver machine. 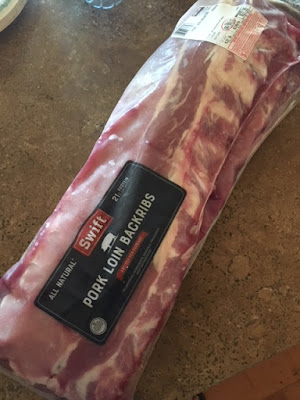 I was extremely lucky to find an entire roll of bag material inside.  It probably cost me $15 in plastic to reseal them.  I was a happy camper when it all went swimmingly and I didn't melt the plastic to my fingers.  Today, with a new rub recipe, I'll smear up one slab and get ready for more smoke.

These cook at about 220 degrees, so the temperature shouldn't be hard to acquire.  With the 105 temps we've been having, I could probably just set the thing in the sun and be done with it.  Last night it got all the way down to 75 degrees.  Woohoo!!! 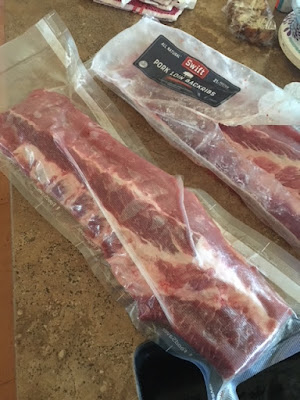 While in town, I did gather a little information.  Unfortunately I didn't come up with a name on that protest permit yet.  In fact, there were THREE protests yesterday.  Apparently all three involved the University of California students.

Those are the peaceful demonstrators, but somehow the OTHER groups are riding on their backs.  How they know when and where these demonstrations are going to be held is not known.  Lucky for the town, the main streets with the most traffic do not have businesses they can break in to with one exception .... the Bike Shop known for it's very expensive racing bicycles.  Yup ... windows broken and stuff stolen.

It appears that ANTIFA is most likely the culprit here, but there is no proof as of yet.  They are actually coming into town in buses.  Yes, someone is bussing them into our area.  Locals looking for free TV's and game boxes are following along in the hopes of looting businesses.

What they don't understand about this County is that it's a big gun advocate area.  Practically everyone has a concealed carry permit and they are all about backing up their Sheriff.  Businesses on our little main street boarded up their windows and doors anyway, basically closing down just when they thought they might survive the C-19 debacle.  Sadly I don't think they will recover.

So today I'll leave you with this nice sunset picture.  It's sad that all those protestors don't realize the real damage they are doing to our towns and how much they are affecting many people to be even MORE racist due to their actions.  Seems to me if you show respect, you get respect (take Martin Luther King for example) but that's not happening. 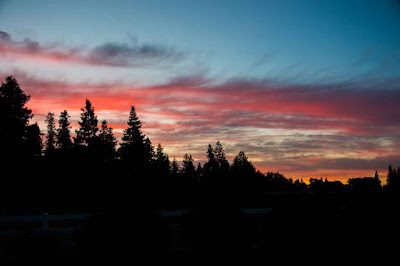