The voodoo dolls have been held at bay for an entire day.  Knock on wood, nothing went wrong yesterday as I drug out my smoker for some local entertainment.

I love smoking in my Bradley.  It's controls are all electronic so it's much easier, at least until you get to the end part where you determine if it's done or not.  I quit cooking chickens because I never seemed to get that part right.  They were WAY too red in the middle, probably because I didn't know how to work the vent at the top.  How hard can that be?

This is a new recipe from Myron Mixon.  He's won more barbecue championships than anyone in the world, and he will tell you so.  Must be some good stuff, so I got his book.  Anything to give me an edge and not waste this expensive meat.

Believe it or not, I actually brined these two chicks overnight, something I've never done before.  Then I mixed up his rub and placed them on racks in these big pans, filling them half full of apple  juice.  In the smoker they went. 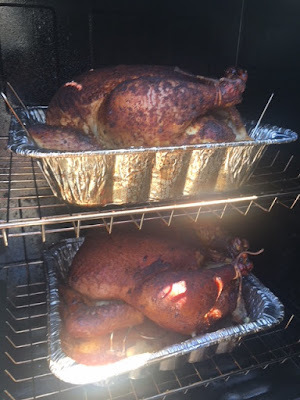 Looking pretty good, right?  My mouth was watering and my entire self smelled of smoke.  Unfortunately, I left the little vent open too much and it wouldn't come up to 250 degrees.  45 minutes later, I figured it out, which of course added 45 minutes to the cooking time.   Three pound chickens, three hours, only mine were FIVE pound chickies.

By the way, did I mention I had company?  My friend Cyndae came down from Sacramento.  The perfect guinea pig to test out this recipe.  She likes ALL my food!  Finally, five hours later, they hit 165 degrees and I brought them out to rest.  They looked a little overdone to me but it turned out that was just the rub and not charcoal. 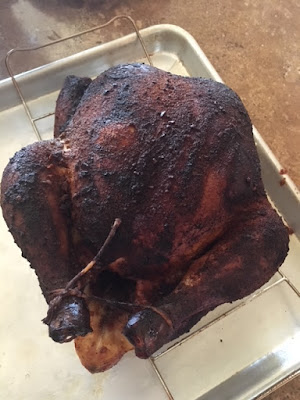 Amazingly, they were cooked perfectly, juicy and tender.  I'm not so hot on Myron's rub though.  There was WAY too much chili powder and not near enough salt.  He probably wouldn't give away his best recipes ... maybe I can tweak this one and make it more to my liking.

The other problem, if anyone might know, is that I really don't taste that much smoky flavor.  Out of the five hours it cooked, I only ran the smoke for 2-1/2 hours.  Maybe I should have let it go for the entire cooking time? 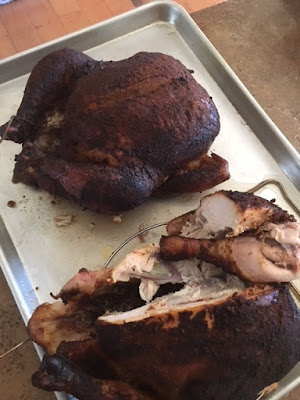 At any rate, it was pretty tasty ... a win in my book.  Next up baby back ribs.  Cyndae stopped in at Costco on her way down and picked up a three pack for me.  We will see how Myron's recipe is for those in a couple of days.

In the meantime, I sure would like to know who is setting up all these protests.  You have to get a permit to do so in every town.  So far there have been four in our local area, something that has never happened before.  Businesses are now being shamed and blamed because they put up plywood to protect their stores from damage.  "How dare you think we are going to loot and burn your business.  You are SO racist!!!"  I kid you not, that's what's going on here in California.

There is going to be another in Merced this morning.  The Sheriff, Highway Patrol and Police Department are geared up to keep the peace.  Our Sheriff is one cowboy you don't want to mess with.  In the meantime, I'm doing some investigation to see just what organization is setting these up in our tiny farming towns.