I bet you thought you were going to see lots of FAIR pictures.  I did too.  No, this isn't one of the entries in the fowl category, it's the chicken I cooked when I got home at 7:00 am.  I know things happen, but I wasn't expecting to be the sole person sitting in the parking lot at 5:30. 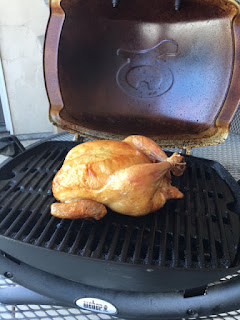 It seems the Sheriff canceled breakfast on Sunday.  The "one in charge" forgot to call me.  There I was, rushing to the fairgrounds, giving my "I'm cooking" excuse to the gate guard and heading through the obstacle course to the burger stand.

Uh oh ... no one there yet.  I waited, like the good little volunteer I am.  I had to move my truck twice because the fairgrounds crew wanted to power wash the area.  Finally, when no one arrived by 6:30, I called the only person that I knew would be awake.  What's so-and-so's number I asked.

I woke her up.  Sorry for calling so early (not sorry), but aren't we supposed to be cooking?  "No ..... not until noon".  I went home and never returned.  I was considering not returning at all, but then I would be the bad guy.  I received an apology about 5:00 pm.   I'm going back this morning ... at 7:00, but I'm bowing out on Tuesday, since it's Magic Kingdom Bingo night and I'm not feeling the love.


I stopped on the way home for a few of those mini propane bottles.  Cooper needed some dinner and I was completely out.  George's recipe for cooking a whole chicken has worked three times in a row.  I'm considering it a keeper.  Isn't it pretty??

Since I too was out of chicken, I threw on three big bone-in thighs.  Surprisingly, they came out perfect.  It's a miracle!! 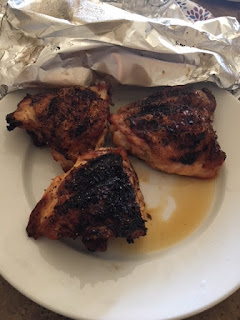 It was a boring day, since I was geared wrong from the start.  I worked on this quilt for a few hours, but kept making mistake after mistake.  The seam ripper is now my best friend. 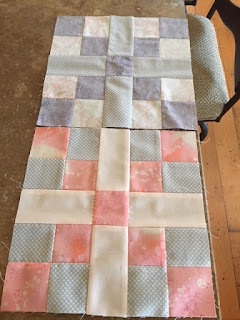 Time to try something else.  You know those mini-muffin-tin take-along egg things?  They are like a quiche, only made in a muffin pan.  I buy them from the freezer aisle quite often.  Wouldn't it be better and cheaper, to make them yourself?  No it would not!!

They looked great until they came out of the oven and dropped two inches into little hockey pucks.  Unlike hockey pucks, they were not the least bit slick.  In fact, they completely refused to leave the refuge of the pan, in spite of the liberal application of butter.

By the time I got them out, they were in a zillion pieces.  I think I ate three, but honestly, I lost count of the parts.  The rest of the pieces went in a zip lok bag.  Then I faced the pan.  How could they possibly stick that bad??

I spent the next hour cleaning each and every hole with my fingernails.  Nothing else seemed to work, short of a blast furnace!!  I considered throwing the pan away, but it was relatively new as pans go. 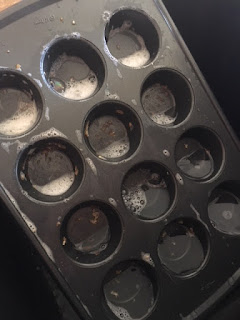 Needless to say, I won't be making THOSE again.  I'll pick up another box from the freezer section.

Maybe, if I'm really lucky, I'll have a fair picture or two for you tomorrow.