I guess I was a lot more tired than I thought.  I had plans yesterday to get things done, but I ended up on the couch most of the day ..... sleeping!!  I think I worked a few too many hours, a total of 93 in 7 days.

Here's the morning crew!!  That's the Sheriff in the back and left to right ... Danny, me, Ed and Fred.  What a crew to draw to!!  We all arrived at 4:30-5:00 in the morning to cut up everything for the day. Baked potatoes, bacon and linguica ends for breakfast burritos and peppers and onions for linguica sandwiches. 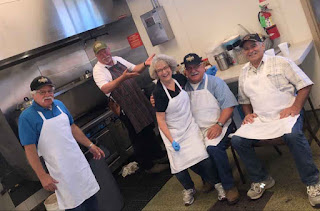 This group was fun from start to finish, with jokes, ribbing and GREAT food!!  The Sheriff was always mixing up something for us to try.  They cut the ends off the linguica (so it would fit the buns), then cut them almost in half long ways so they would lay flat on the grill.  It helps that Danny was a meat cutter all his life.  Don't tell him I used his knife to cut a wrapped burrito in half!!

I have a new spice for you to try.  It's called Cajun Seasoning by McCormick.  Vern put it in almost every burrito concoction.  It enhanced the flavor so much and only gave a hint of heat in the back of your mouth.  Gosh that was good!!!  A little fajita sauce mixed in with the eggs didn't hurt either.  Sound weird?  That's what I thought, until I tried it.  Add a little garlic herb mixture and you've got a total of 114 burritos out the door on one morning!!

The hardest part was training new recruits every few hours when the next bunch came in the door.  These two guys were out of control!!  I left before the ticket line got filled up, which I'm sure put the kibosh on their activities.  All of these guys are part of the dirty thirty that do everything around the Lodge.  It's unique that two of the crew are retired commercial airline pilots.  You can probably imagine the conversations! 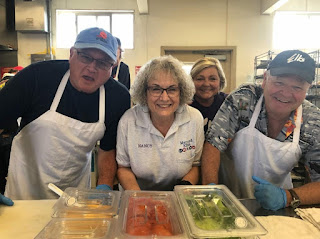 I didn't have time to check out anything at the fair, but I did walk by the ponies every evening on my way to my truck.  I'm sure they put on as many miles as I did!  By the way, that ended up being an average of 7 miles walking per day, even though I rarely left the building. 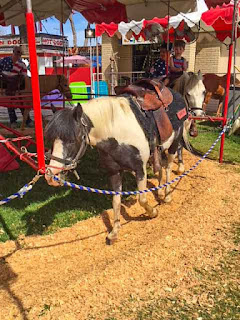 Yesterday I was up at 4:00, but fell asleep on the couch about 6:30.  I woke up in time to get my truck smogged, along with picking up some chicken to cook for the puppies.  I discovered you can't cook a big chicken twice in a row on those little propane canisters.  It takes TWO!!

More sleeping occurred here and there until it was time to crash.  By then the temperature outside was 105 degrees and I was roasting, feeling much like that linguica on the grill!!

I'll probably spend even MORE time on the couch this morning, as it's Magic Kingdom time tonight.

Posted by Nancy Kissack at 5:13 AM