There's a new Sheriff in town and you better watch out.  He doesn't like just anyone wandering around the neighborhood.  His territory is HIS territory!!  He struts around like he's someBODY patrolling his hard fought grubstake.

And he doesn't even need a six shooter.  This no-name guy is the loudest I've ever heard.  Not just a tweet, but a scream the likes of which will make you look every time.

I've noticed of late that when I go outside, he flies around squawking until I go back inside.  The entire time I was washing the rig, he kept me company. 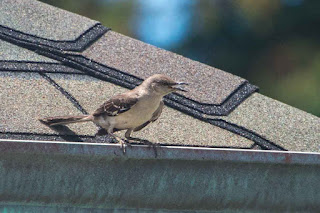 Yesterday when I let the puppies out, I watched him take a swipe at Cooper.  He actually flew right down and bit him on the butt!!  Wait you little rascal ... these cowhands were here first!!  Jessie was oblivious.  He missed her on the first pass. 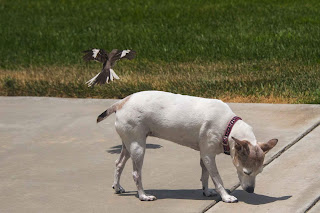 He quickly turned around and swooped in for the coup de gras!!  Well you little blankety-blank!  He nailed her right on the backside.  What the heck?  Obviously she wasn't doing a thing!!  He came around for the third time when I stepped in and yelled.  He flew back to the roofline and squawked at us even louder. 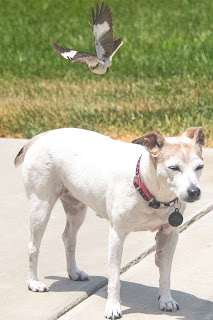 I've no idea what kind of bird it is.  At first I thought magpie, but those are much larger and black.  We stayed out another ten minutes and he made four more passes.  Apparently he has homesteaded my back yard.  I thought there might be a nest around, but couldn't find even one little stick in the tree.  Beware the new Sheriff!!!

Otherwise, I've been busy packing boxes of quilting material.  I SWEAR I'm not buying ANY MORE FABRIC!!!  I loaded up the Def fluid, the barbecue and my clothes.  That leaves the fridge and freezer, a task I always hate.   I try to eat up everything I can before I go, but it's hard to schedule everything out.  If I run short, maybe I'll have "bird" for dinner!!!