It's always an unorganized mess the first day, am I correct?  This day was no different.  We arrived extra early, hoping the fridge repair guy would show up (we already knew it was on the fritz).  That would be a NO.  All of the food for the day ended up in the smallest of refrigerators.  Leave it to a woman to make it all fit. 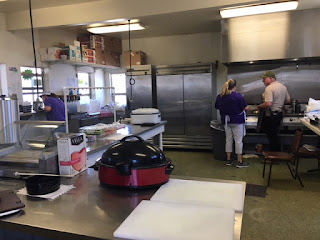 That's when we discovered the Pepsi was awful.  That's my go-to drink.  When I've got to go and go and go, that's the sugary sweet one I need for energy.  It had WAY too much carbonated water and not NEAR enough syrup.  A call was made to THAT repair guy.

In the meantime, we cooked and wrapped up 75 of the biggest breakfast burritos on the planet.  They went as fast as we could cook them for $7 each.  Unfortunately, we only sold ONE cup of coffee out of the 75 cup pot.  It took me a minute to figure out the third time the coffee percolated that no one had taken the grounds out.  That little stick thing makes it perk again and again.  There was a two minute training session.

To make matters worse, they located the darn cinnamon wagon right across from us.  The obnoxious smell of cinnamon rolls wafted through our building.  We tried to cover it up with linguisa!! 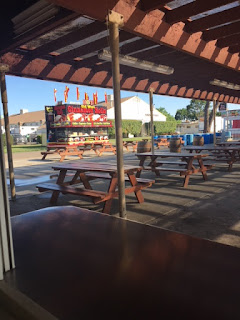 At long last I couldn't stand it any more.  I grabbed a donut from the box hidden in the far corner of our booth.  There was one less for sale.  Oh my gosh it was good!!!  My taste buds were screaming with joy!!  The best part, there was no funny metallic aftertaste!! 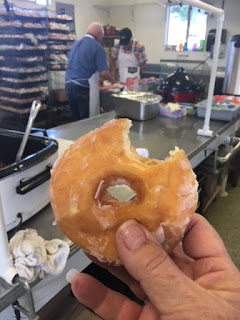 Then came the chili for chili dogs and burgers.  Uh oh ... they bought the kind with beans.  I am NOT picking out all those beans!  So we grabbed a slotted spoon and smashed them into non-existence.  The Sheriff added his special spices and VOILA!!  Chili!! 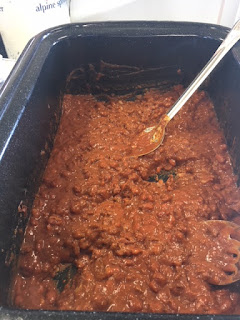 Just when we were getting into the swing of things, I mentioned I would love a hot dog, but the ones they bought were awful.  Limp, squishy, kind of like baby food.  I won't name the brand, but the Sheriff ate one and threw the rest in the trash.  He had no idea!  We DO have standards, you know.

That meant I had to make a Costco run for their good dogs.  Too bad I left my card at home.  All I had with me was a debit card and my driver's license.  The nice people at Costco gave me a temporary card so I could purchase 175 dogs, which are currently residing in my fridge.  I'll load them up shortly for the trip back to the fairgrounds.

At long last the refrigerator was repaired and working, the soda machine was fixed (while we watched carefully in case we need to do it again) and we have dogs.  It just HAS to be a good day today!!  Well except for that part when I head off to Bingo and don't get home until 10:30.  What's that saying?  No sleep for the wicked or was it "volunteers"!!!