After a nice breakfast burrito filled with bacon (only one piece), egg and cheese (how can you beat that?), I immediately got to work on my "list".  It was cool ... almost cold in fact ... as I drug out the ladder to take care of the first problem.

Rarely do I look up.  From now on, I'll make it a habit.  Here's what I found in one of my ten patio lights.  Whoever built this house wanted LOTS of light.  Since I leave these on most of the time, I removed most of the bulbs.

Apparently that was an invitation to build a condo.  How in the world did they not get electrocuted??  Or worse yet, start a fire?  Thankfully they vacated the building.  It's time for demolition.

So just what do you use to reach into a "hot" light socket and not get electrocuted yourself?  My first thought was tongs, but instead, I went for a screwdriver with a plastic handle ... not that that really would have helped. 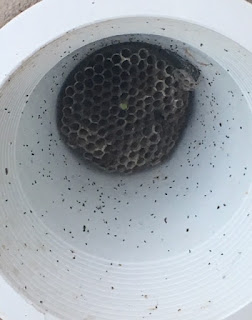 Come to find out, it was barely attached to the bottom of the ring and nowhere near the current.  I replaced it with a nice LED floodlight.  I may have to buy seven more to fill up the other currently condo-less sockets. 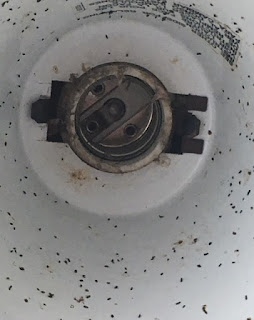 With that done, I headed out to the garage area to clean this light of more spider webs and dead bug carcasses than I've ever seen.  How do they get in there??  Talk about a fire hazard!!  I used a swiffer duster and was able to get it clean as a whistle, except for a few carcasses at the bottom. 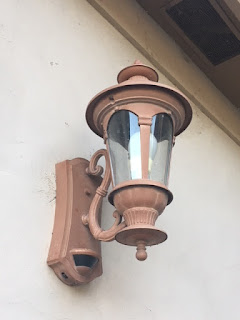 While I was out and about at 6:00, I grabbed my handy dandy bottle of insect killer and sprayed outside the house and inside the garage.  This stuff works pretty good.  I should probably spray the light fixtures!! 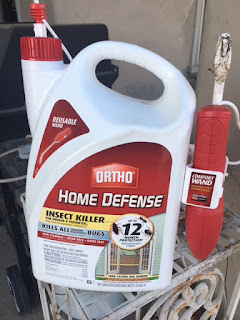 By 7:00 I was done.  Rather than overdo quilting, I plopped on the couch for some Sunday TV.  Unfortunately I'm on a Tucson satellite for the baseball games, so I didn't get to watch Sunday Morning's train story about UP 4014 and it's trip to Ogden Utah.

Instead, I watched the Bouldering National Championships.  That's solving rock climbing problems on crazy walls with holds the size of your fingernail while upside down.  Talk about Spiderman, these kids are BETTER than Spiderman!  I wouldn't even be able to get up on the first hold!!  These "rocks" don't have places to grab on to, they only have flat sides. 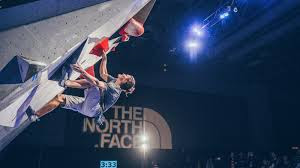 This is me about eight years ago.  This wall had lots of hand holds in all different sizes.  You try to hit the holds with the same color tags.  Different tags mark different routes and difficulty.  I'm free climbing but am actually tethered to a rope in case I fall.  I really wasn't very confident in the 98 pound person on the other end. 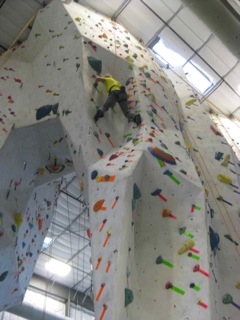 Next up ... the bag brawl.  Who's heard of that?  How about Cornhole?  Maybe in the Midwest.  I never knew it was so popular.  These guys look like Indy 500 drivers!!  I had no idea there was a National Finals for Cornhole, a game I've never played before. 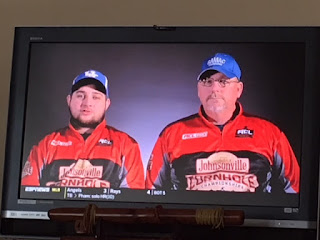 Then there are air shots.  Most guys hit the board and let it slide into the hole.  The guy on the right threw almost exclusively air shots ... toss it way up in the air and have it go straight down into the hole.  I was amazed at his accuracy.  So was everyone else, and of course he and his partner won. 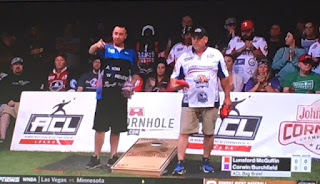 So the next time you're sitting around on a Sunday, check out the weird channels you never watch and see what crazy new things you can learn.  Bag brawls, cornhole and bouldering just might be on the schedule.