For the third day in a row, I wandered outside in the cool of the morning to watch the sunrise.  I was rewarded this time by a beautiful sight.  I'm surprised at the difference between 106 degrees and 91.  It's been absolutely COOL.  80 would be better, but I'm not complaining.  I'll wait until I get to Arizona for that!! 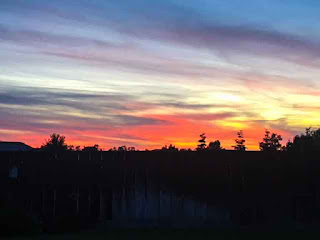 On one of those "I don't want to go outside" days, I decided to whip up that sugar free jello ... for the third time.  I'm still finding pieces of stuck-like-glue jello on the walls from the first time.  The second time, the new recipe said to add half a cup of Swerve, my very expensive sugar-free sugar.

It was so sweet it was sickening, and barely edible, not to mention a solid block of concrete I had to cut with a knife.  I didn't let the jello set quite long enough before blending.

The third time was a charm ..... I let the jello sit a little longer, didn't beat it to death with my mixer and added only 1/4 cup swerve.  It's delicious!!!!!  Honestly, I can't believe I've gone this long without real sugar, not to mention BREAD. 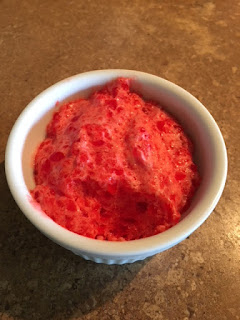 In between contemplating what concoction I would whip up for dinner, I attempted to load this huge recliner in my Jeep.  I discovered quite by accident that the back comes off.  After dragging it out to the garage, it sat for an hour while I tried to figure a way to lift this TOO heavy beast up three feet.

Necessity is the mother of invention.  I grabbed a box of old tax papers (a least they were good for something), got one end up on that and was finally able to flip it over and into the back.  Trouble was, it was upside down and would flatten the cushions considerably.  RATS!  I drug it out.

I'm not sure how it happened, but the second time, it ended up in exactly the same position, in spite of my attempts to make sure I did it differently.  I studied the situation intently - place it here, flip it this way.

The third time was a charm as I was actually able to hoist it up far enough to man-handle it inside, right side up.  What you see is the back piece, which I just stuffed next to the bottom.  I'm not sure how it's going to ride going down the road, what with it being a rocker recliner.  I'll have to stick something in there to keep it from rocking.  It's going to the Arizona house. 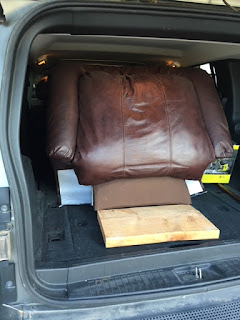 In the quest for an RV cover, my bid arrived adding $600 to the cost just in case they have to dig deeper to natural soil.  I checked out a second company and received a bid of $8,000 with NO installation.  It's a do-it-yourself version.  Maybe the third time will be a charm.