I Missed The Summer Solstice!!

As a runner, I always liked the long days marking the beginning of summer.  I could run late into the evening when it was cooler, but still have lots of light.  Nowadays, I just wish it would get on with it so I could go to sleep earlier!!!

Apparently I missed it Friday night, what with the explosion and all.  I have to admit I've learned a new skill.  Sleeping in the middle of the day.  Cooper sees no problem with that at all!!! 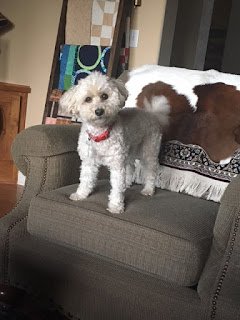 The pump is still pumping and water is still flowing.  This morning was the big test ... the sprinklers came on and are still going.  It takes about 3-1/2 hours to finish up.  Seems pretty crazy to me.  In the old days of PG&E, it didn't matter.  Now it's a different story.  Today I'll go around and make a few more adjustments in the downward direction!!

It's not all fun and games around here ... it's spider time.  There's nothing dangerous except black widows, which don't come out until after dark.  These guys make me crazy!  They can jump three feet!!  As I opened the back door yesterday, one fell from the upper casing.  I did the best spider dance you've ever seen!!  Just what I needed ..... more adrenaline!!

This is a Regal Jumping Spider.  They didn't get that name for nothing ... they really do jump. 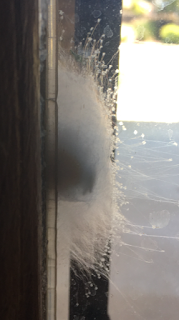 For my last barbecue hurrah before packing it away, I picked up some pork chops.  You know, the really thick kind that always turn out tough and chewy.  I actually looked up "how to" this time, keeping them on low.  It said pork was done at 145 ... done enough anyway, to kill anything it might be harboring.

Oops .... I left them a little too long.  It didn't matter though, they came out perfect!  I can't believe how tender and delicious they were.  The best part was I had enough for three meals with one cooking.  I think I'm going to like this barbecue thing after all!! 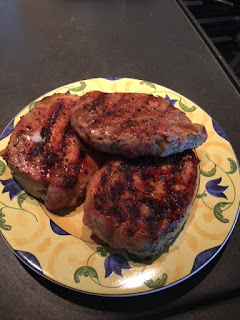 Right now I'm practicing summer.  There are yellow sticky notes resembling flowers, all over my house, along with my regular long list I print from the computer.  It's getting close to takeoff time.