After all the crazy stuff that's been going on around here, I decided to opt for some R and R. I admit, I'm not very good at that activity.  I forced myself to pick up a crochet hook and start on an old fashioned granny square quilt for the puppies.  You might think they are round now, but in the end, they will be squares.  At least it's easier on my wallet than shopping for quilt fabric. 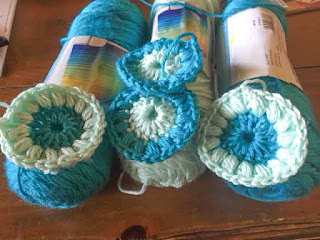 Temperatures are on the rise, so every morning I open the back door and turn on the fans to circulate cool air through the house.  It's working like a charm.  In spite of 100 degree temperatures, I only use the air conditioner in the evening to cool down my bedroom.

PG&E is on the move again.  For some weird reason, my $350 a month summer bill has only been $150.  I've said all along that their smart meters were set wrong.  It appears they have fixed that problem, at least for me.

On the other hand, they have now sent out notices to everyone that should there be a fire anywhere near your residence, they will shut off the power to everyone, including entire towns, until they deem it safe to turn it back on.  That could be a couple of hours or as long as 24 hours or even longer.

Their answer to the outrage is "you'll just have to go buy generators to keep your fridge and freezer going.  So sorry charlie."  The little town of Manteca isn't anywhere near a fire district, but has received notice they will be shut down.  THE ENTIRE TOWN!!  In the meantime, everyone in California will be paying for all the destruction from the Paradise fire, which now appears to have been PG&E's fault.

In the meantime while I still have electricity, I gave Cooper a quick haircut.  Every time he went outside, he came back in panting from the heat. 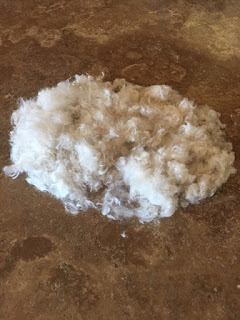 That's about it.  I crocheted, watched baseball (the Giants lost yet another game, no surprise), adjusted the lawn sprinklers for the umpteenth time and ate TWO fat bombs.  I even sat on the patio and watched the sunset out of pure boredom.  This made me smile!! 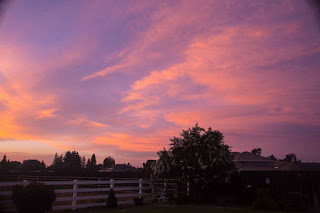 When I look at these pictures, I imagine myself in a cabin out in the woods of Montana, without the snow and cold of course, nor the 100 mile drive to the grocery store.  Doesn't it look inviting? 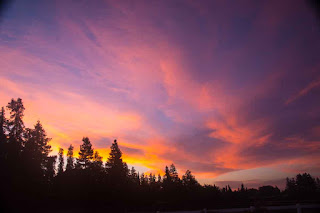 So today I'm off to deliver some things to our little zoo.  I happy to say I discovered a group of those young dressed-to-the-nines kids that knock on doors (they are from the LDS church) spend several hours every week helping out at the zoo.  How cool is that?

Next up ... washing Utah off the motorhome.